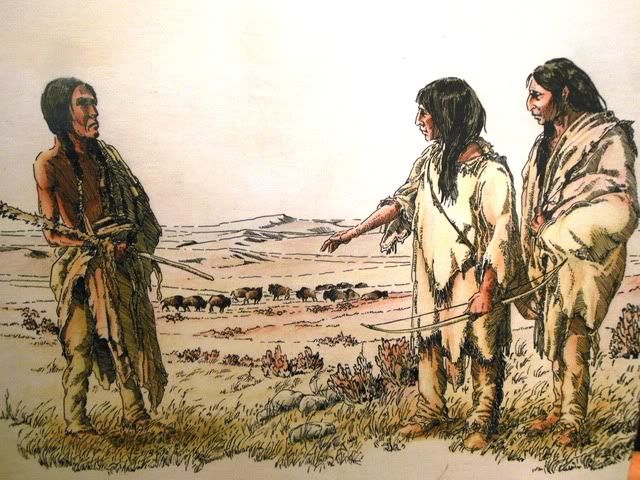 There is a common lie, told over and over again by the hierarchy of the Catholic Church– including the previous Pope–that when the Catholic missionaries landed in South America they were met by people eagerly awaiting the Christian faith. According to this lie, the indigenous people, who had no religion from the Catholic viewpoint, were anxious for the word of God and for conversion to the one true faith.

In reality, the Catholic missionaries arrived in South America armed with guns, steel, germs, and a legal document-the Discovery Doctrine-which authorized a reign of terror and genocide against all who failed to convert. The Discovery Doctrine declared that Christian nations had a right, if not an obligation, to govern all non-Christian nations. Once an Indian nation had been read the Christian history of the world, even though it might be read to them in a language they did not understand, then they were obligated to be ruled by the “superior” Christian nation.

The Catholic Pope in 1452 laid the foundation for the Doctrine of Discovery by issuing the papal bull dum diversas which instructed the Portuguese monarchy:

Furthermore, the Natives who resist are to be held guilty of all resulting deaths and injuries.

What the Catholic missionaries found in South America, in places such as the area which would become Argentina, were American Indians who already had religion and were not eager to abandon their way of life to conform to Catholic standards. What followed were centuries of religious suppression, not of Christianity, but of the Indian religions as well as both cultural genocide-an attempt to eradicate all aspect of indigenous cultures-and physical genocide.

Among Argentina’s Indian nations, groups such as the Diaguita, had successfully prevented the Inka from expanding their empire and these groups vigorously opposed the expansion of European empires into their lands. They carried on a prolonged campaign against Spanish colonization and rule. They stopped several attempts by the Spanish to establish a colony at Buenos Aires and in 1516 killed the Spanish explorer Juan de Solis. It wasn’t until the late sixteenth century that the Spanish gained a firm foothold on the country. Spanish domination came not from the superiority of their religion or their weapons, but from the diseases which they had unknowingly brought with them. These diseases, such as smallpox, decimated the Native populations.

In current times, the previous two popes and the Catholic hierarchy have been asked on numerous occasions to rescind the Discovery Doctrine. By their silence and their inability to acknowledge the truth of the genocide which they committed, the doctrine continues today as church policy. Several protestant churches, including the Church of England, have already renounced the Discovery Doctrine. Native American groups have already indicated that they plan to ask the new pope to rescind what they see as an evil doctrine. According to Tonya Frichner, president of the American Indian Law Alliance:

“Now is the time for the new leader of the Roman Catholic Church to extend a hand and talk about these issues.”

The protest against the Discovery Doctrine won’t fade once the white smoke dissipates from the Sistine Chapel chimney. In August, Native Americans will embark on a 13-day canoe trip from Albany to New York City to symbolize the common ground they share with European settlers – a relationship that could be improved with the renunciation of the heinous papal declaration.

There are some today who say that the Latin American people have waited twenty centuries for a Latin American pope. This continues the mythology of Indian people eagerly awaiting Catholicism. It denies the validity of American Indian religions and ignores the genocide perpetrated against them.

Today, the people of Argentina are overwhelmingly of Spanish and Italian descent (97%) and less than 2% can claim indigenous heritage. The many native languages which were once spoken in the country have become extinct, as well as most of the Native American ceremonial practices. Many of the Indian nations which once called this area home have also gone extinct.