The fur trade was an important part of the economic history of North America and incorporated American Indian economies into a larger world economy. Furs were valuable, easily portable, and renewable resources. The prime furs—marten, otter, fox—were sold at high prices in the European and Chinese markets. Of less value, but still profitable, were pelts from buffalo, beaver, muskrat, and squirrel. 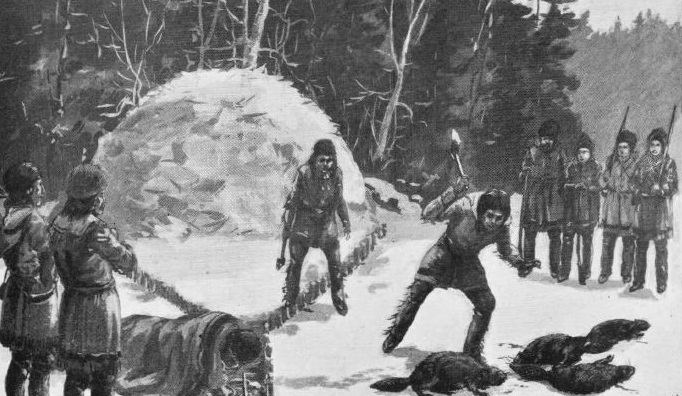 In 1800, fur traders with the North West Company met a party of Kootenai—26 men and 7 women—at the headwaters of the Red Deer River in what is now Banff National Park. On the way to the rendezvous, the traders were guided by He Dog (Cree) and Old Bear (Piegan Blackfoot). They stopped at several camps during their eight-day trip to the rendezvous  and many of the Blackfoot attempted to convince the traders that they would not be able to find the Kootenai.

The Kootenai chief presented fur trader David Thompson with a bow and quiver of arrows, a red foxskin cap, and a horse loaded with 50 beaver skins. Thompson told him to hold on to the horse and furs until they could trade properly at Rocky Mountain House.

During the night, the Piegan Blackfoot captured 5 of the 11 Kootenai horses. While the Kootenai wanted to return home west of the Rocky Mountains, Thompson convinced them to go to the trading post. Thompson wrote:  “They complained much & bitterly to me of what had been stolen & plundered from them … several of the principal of them went so far as to kneel down and swear by the Sun, the Skies, and Earth, that they would revenge themselves.”

Five days later the party of traders and Kootenai camp neared a friendly Piegan Blackfoot chief. The Blackfoot challenged the Kootenai to a gambling match and lost every game. In the morning, the Kootenai found that they had only two horses left. Thompson rode back to Rocky Mountain House and obtained fresh horses for them.

That winter, North West Company traders visited the winter camp of Blackfoot chief Old Bear. When the traders mentioned that they were going to explore the western front range of the Rocky Mountains Old Bear warned them to be on the lookout for Flathead war parties looking to capture horses.

In 1801, fur traders with the North West Company together with Rook (Cree), his wife, and a Kootenai woman, embarked on a trading trip across the Rocky Mountains to the Kootenai. The traders had some reservations about Rook’s ability to guide them and made him swear an oath over his medicine pipe. The expedition failed to cross the mountains and Rook admitted that he was lost.

Four years later, the Nor’westers were establishing trading posts west of the Rocky Mountains in what is now British Columbia.