By 1830, the American government had decided that American Indians had no place in the United States and passed legislation calling for their removal to lands west of the Mississippi River. As a part of this removal effort, the Americans negotiated a series of treaties with the various Indian nations in which the Indians ceded their lands and were given new lands in the west. 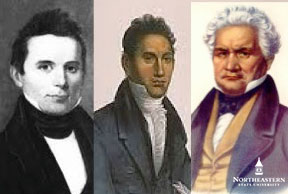 A few Cherokee leaders – primarily Major Ridge, John Ridge, Elias Boudinot, Andrew Ross, James Starr, Stand Watie, James Rogers, Archilla Smith, John A. Bell, Charles Foreman, George W. Adair, and Thomas Watie– signed the Treaty of New Echota in Georgia. None of those signing the treaty had been authorized by the Cherokee Nation to sign it. The signers would become known as the Treaty Party. Upon signing the treaty, Major Ridge said: “I have signed my death warrant” in reference to the Cherokee law which called for the death penalty for those who sold Cherokee land without the consent of the National Council.

Under the terms of this treaty, the Cherokee were to give up all of their lands east of the Mississippi and to move to Oklahoma and Arkansas. Cherokee Principal Chief John Ross repudiated the treaty because it was signed by a minority of the Cherokee leaders. However, the notice which had been sent to the Cherokee notifying them of the treaty council indicated that those leaders not in attendance would be considered to approve any document signed by the negotiators.

Most historians today view the Treaty of New Echota as a fraud. Cherokee historian Robert Conley, in his book The Cherokee Nation: A History writes:  “The entire procedure was illegal, but it was what the United States government wanted, and it was accepted by the U.S. Congress as legal and binding on the entire Cherokee Nation.”

Under the terms of the treaty, the United States promised to pay the Cherokee $5 million.

As soon as the new treaty was ratified by the Senate, President Andrew Jackson issued a proclamation that the United States no longer recognized the existence of any government among the Cherokee in the Southeast. Furthermore, the Cherokee were warned that any resistance to removal would be met by force through the army.

Ten years after the treaty had been signed and ratified by the Senate, the Cherokee had still not been paid. In 1845, the Cherokee sent a delegation to Washington, D.C. to secure an adjustment of the claims and other unsettled business of the nation. The delegation, under the leadership of John Ross, included Richard Tayler,  John Looney, Aaron Price, David Vann, Joseph Spears, and Thigh Walker. The tribe was owed $5 million as a part of the Treaty of New Echota. Brian Hicks in his book Toward the Setting Sun: John Ross, the Cherokees, and  the Trail of Tears, writes:  “The United States government refused to live up to its end of the bargain, officials inventing any number of excuses. Some refused to recognize the tribe as long as Ross was chief.”

In 1846, the United States negotiated a new treaty with the Cherokee. All of the Western Cherokee groups—the Old Settlers, the Treaty Party, and the National Party—as well as the Eastern Cherokee were present for the treaty signing. Under the new treaty, the United States promised to reimburse the Cherokee Nation for sums which were unfairly deducted by the United States from their payment for their eastern lands. According to some accounts, the rivals Stand Watie of the Treaty Party and John Ross of the National Party shook hands at the end of the signing. Other accounts claim that this is just a legend stemming from wishful thinking.

The new treaty also declared that Cherokee lands in Oklahoma were to be for the use and occupancy of all Cherokee. The treaty guaranteed every Cherokee accused of a crime the right to a trial by jury.

Grace Steele Woodward, in her book The Cherokees, writes:  “After the Treaty of 1846 the Cherokee Nation enjoyed a golden era of prosperity and progress unsurpassed by its territorial neighbors. In the era that followed the treaty, education, building projects (both private and public), churches and missions, improvement societies, agriculture, domestic arts, and animal husbandry thrived in the Nation.”

With regard to the Eastern Cherokee, the new 1846 treaty upheld the rights of the Cherokee who had remained east of the Mississippi.