Because England is a Christian nation, the Discovery Doctrine supposedly gave it the right to govern all non-Christian nations. In 1606, therefore, England was able to give a Royal Charter to the Virginia Company to develop a market in the New World for English commerce and for “propagating of Christian Religion to such people, as yet live in darkness.” In this charter, Indians were characterized as living “in Darkness and miserable Ignorance of the true Knowledge and Worship of God.” 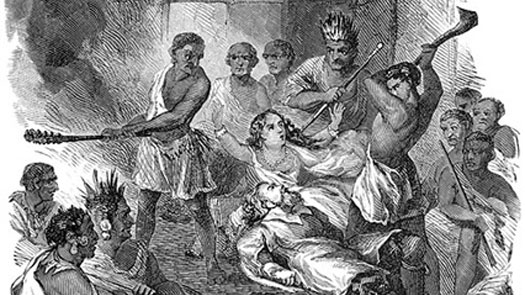 The Virginia Company, a corporation, was founded and directed by a group of merchants and gentry who were motivated in part by the promise of strong economic returns for their investment. Their Royal Charter gave them permission to exploit the riches of Virginia with little or no concern to any possible ownership of these riches by Indian nations. The Company planned to establish a trading post which would acquire valuable furs from the Indians and to sell the Indians manufactured goods and textiles. In addition, the Company planned to search for gold and to exploit the timber resources of the region.

In addition to seeking profits, the Company also indicated that it would seek the conversion of the heathen (that is, conversion of Indians to Protestant Christianity), the expansion of the English kingdom, increased revenues for the king, and employment for the English vagrant poor.

The following year, three English ships brought 120 British settlers into Chesapeake Bay who established a colony at Jamestown. At this time there were an estimated 20,000 to 25,000 Indians living in the area that would become Virgina. The major tribal confederacy in the area was the Powhatan (also spelled Powhattan), an Algonquian-speaking confederacy of about 30 tribes (some sources indicate as many as 43 tribes). These tribes included the Chickahominy, Mattaponi, Pamunkey, and Rappahannock. The alliance of these tribes had formed in the late 1500s, just prior to the English invasion, by a Pamunkey chief named Wahunsonacock. His capital was located at the falls of the James River in Virginia. This was called Powhatan which means “Falls of the River” and thus the allied tribes were known as the Powhatan. To confuse the matter a bit, Wahunsonacok was also called The Powhatan or simply Powhatan.

Captain John Smith led a small party up the Chickahominy River. The English were attacked by about 200 Pamunkey warriors who captured Smith and killed his companions. The Pamunkey, under the leadership of Opechancanough, were a part of the larger Powhatan Confederacy. Smith was taken before the dominant chief, Powhatan, and was eventually released. Smith, described by his contemporaries as a self-promoting mercenary, reported that he had been kept in a comfortable and friendly fashion. Many years later he would tell a story about being on the verge of being clubbed to death when a prominent woman intervened and saved his life. In one version of the story, he named Pocahontas (a nickname meaning the “spoiled child”) as the woman who saved his life (she was about 10 years old at the time). He told this story only after the death of Pocahontas and after she had gained some fame among the English.

While English writers often describe the Indians as hunters, they were actually farmers who had been planting crops in the region for several centuries. The English were delighted by some of the Indian crops, including strawberries (which were described as being larger and tastier than those in England) and persimmons. Persimmon bread was a common Indian gift.

The English looked upon the land as vacant, even when it had been cleared and planted with the Indian crops of maize (corn), beans, and squash. For the English, land was occupied only when it was laid out in neat rectangles, fenced, and used for a single crop. Since the Indians cleared their lands by burning and used intercropping—the practice of planting crops together—their lands did not look “neat” and “occupied” to English eyes. The English also seemed to be oblivious to the fact that the park-like wilderness was actually a well-managed ecosystem which the Indians maintained by regularly burning it.

One exploring expedition from the Virginia Company at Jamestown traveled up the James River. When the group encountered some Indians in a canoe, the group’s leader, Christopher Newport, asked them for directions. One of Indians sketched a map of the river, its falls, and two native kingdoms beyond the falls. When the English party reached the falls, Newport wanted to continue exploring on foot, but was told by Pawatah, a local village leader, that the Monacan would attack them for entering their territory.

In 1608, the English colonists at Jamestown found that most of their stores were rotten or had been eaten by rats. The countryside around them had abundant game, and John Smith encouraged the colonists to live off the land. Smith sent groups to different places to gather food resources. However, many of the colonists were unaccustomed to living off the land and found it easier to trade with the Indians for supplies. As a result, the settlement was stripped of items—particularly metal items—which could be used for trade. In addition, some colonists deserted to live with the Indians whose way of life they preferred.

With regard to trade, the English introduced a new trade item to the Powhatan: sky blue Venetian glass beads. The traders told the Indians that these were a rare substance and that they were worn only by kings.

The English soon realized that Powhatan led a confederacy of about 30 different groups and his cooperation would be vital to their continued existence. From a European perspective, leaders such as Powhatan needed to be kings and so they decided to conduct a coronation ceremony for him which would make him a king with loyalty to the British Crown. The ceremony was a comedy of cultural misunderstandings as the English attempted to choreograph a feudal ceremony in a society in which two key elements of the ceremony – the crown and the act of bending the knee – were unknown.

John Smith led a small group south on the Chesapeake Bay and up the Patuxent and Rappahannock Rivers. They had a short battle with the Mannahoac in which they wounded and captured Amoroleck. Amoroleck reported that there were four Mannahoac villages on the Rappahannock, each of which had its own leader. When asked what lay beyond the mountains, Amoroleck indicated that he did not know as the woods had not been burnt.

Later, a group of about 60 Susquehannock visited Captain John Smith and the English colonists.

Captain John Smith attempted to obtain corn from the Pamunkey who were under the leadership of Opechancanough. When the chief indicated that he was unwilling to trade, the captain held a gun to the chief’s breast and threatened to kill him unless the English boats were filled with twenty tons of corn. He also told the Pamunkey that if they did not fill his boats with corn, he would fill it with their dead carcasses.

English colonists heard rumors about an Indian mine in the interior. Lured by the possibility of gold, John Smith and six others set off to verify its existence. They employed Potomac guides who they placed in chains during their march. They found a great hole which had been dug with shells and hatchets. The mine, developed by the Indians to obtain minerals for making body paints, failed to yield any gold.