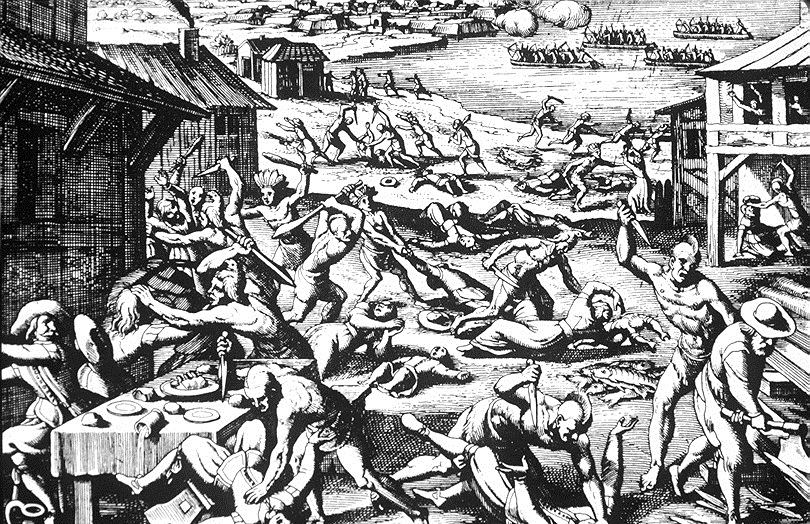 The third Anglo-Powhatan war (1644 to 1646) started with a large, coordinated strike by Powhatan warriors against the Virginia colonists. Several outlying settlements were struck with the Powhatan killing and/or capturing between 400 and 500 English settlers. At this time, there were 8,000 to 10,000 English colonists in Virginia.

The Powhatan, an alliance of several groups, were led by the elderly Opechancanough who was about 100 years old at this time. Opechancanough had also led the early 1622 Powahatan war against the English.

The English had established Jamestown as a mercantile venture in 1607. Since that time, tobacco had become an important export crop, so the English demand for increasing amounts of good farm land had increased. Ignoring the fact that the Indian nations of Virginia were agricultural, the newly arrived colonists simply assumed that the Indian fields were somehow “vacant” and available to them.

From the Powhatan perspective, the coordinated attacks against settlements which had encroached in their territory were meant to send a message to the English. In his book Powhatan’s World and Colonial Virginia, anthropologist Frederick Gleach writes: “Like his earlier attack, the 1644 coup can be best understood as an attempt by Opechancanough to correct the colonists’ inappropriate behavior and to stay their ceaseless expansion.”

The English colonists responded to the attacks by declaring a general war against the Powhatan. All private trade with the Powhatan was to be terminated. The Virginia Assembly felt that the Indians had obtained guns, powder, and shot through private trade. However, it was soon apparent that the colonists needed the trade in order to survive: without Indian corn they would starve. In 1645, the Assembly allowed authorized agents to trade with the Indians in order to obtain the badly needed grain.

The colonists attacked the Pamunkey and Chickahominy, two tribes affiliated with the Powhatan alliance. The Weyanocks, fearing English attacks, moved south of the Blackwater Swamp and purchased land from the Tuscarora.

In 1646, the General Assembly authorized a force under Lieutentant Francis Poythers to find Openchancanough and press for peace. Poythers, a trader with general knowledge of Virginia Indians, had experience in dealing with Opechancanough regarding land claims. Poythers, however, was unable to find Opechancanough.

A force led by Governor Berkley and aided by Rappahannock and Accomac allies manage to capture Openchancanough between the falls of the Appomattox and James rivers. At this time, the elderly Indian leader was unable to walk unaided. The English treated Opechancanough as a side show, displaying him to curious English colonists. The Indian leader, however, maintained his dignity and upbraided the English commander for the English’s lack of respect. The English commander then ordered that Opechancanough be treated with the dignity befitting his station.

The English governor considered sending Openchancanough to England where His Majesty would be presented with a royal prisoner (the English considered Indians chiefs to be royalty, not understanding any of the concepts of Indian government). Before a decision regarding his fate could be made, one of the guards took matters into his own hands and shot the elderly leader in the back. The wound proved to be fatal.

Hundreds of Indians who had been captured by the English during the Third Anglo-Powhatan War were sold into slavery.

With the death of Opechancanough, Necotowance assumed leadership of the Powhatan alliance and negotiated a new treaty with the English. This treaty was the first time Necotowance’s name appeared in the English written records and there is no indication that the English had ever had any previous dealings with him.

The peace treaty between the English colonists and the Powhattan called for the removal of the Powhatan Confederacy to an area north of the York River. Necotowance signed the treaty as “king of the Indians.” The treaty established a pattern of removing Indian nations away from the invading Europeans as a strategy to reduce the conflict between the two groups.