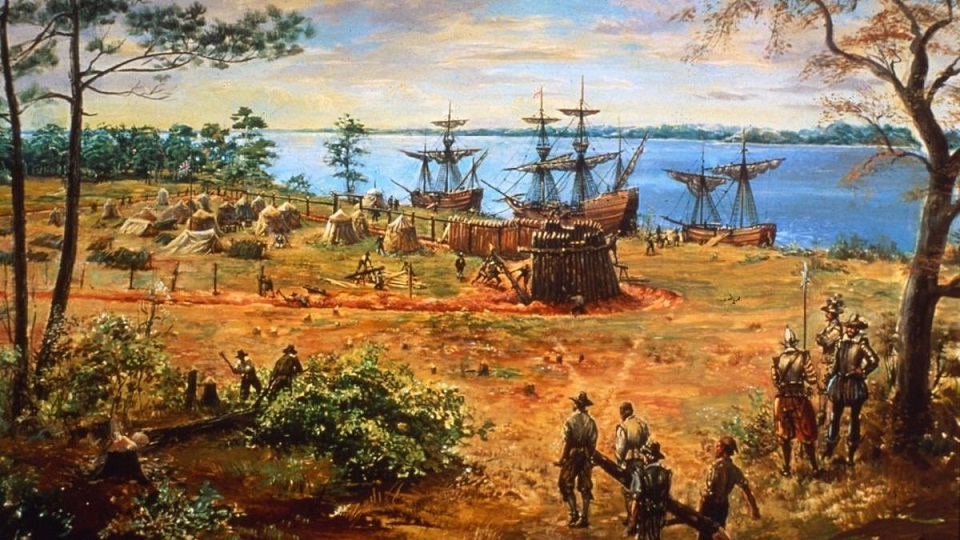 By the early 17th century, the British were becoming concerned about the inroads which the Catholic French and Spanish were making in North America. In 1606, the British monarch gave a Royal Charter to the Virginia Company to develop a market in the New World for English commerce and for “propagating of Christian Religion to such people, as yet live in darkness.” In this charter, Indians were characterized as living

“in Darkness and miserable Ignorance of the true Knowledge and Worship of God.”

The Virginia Company was founded and directed by a group of merchants and gentry who were motivated in part by the promise of strong economic returns for their investment. In order to exploit the rumored riches of North America, the company planned to build a trading post. From here they would be able to acquire furs and other valuables from the Indians and to sell them manufactured goods and textiles. The English investors also envisioned a search for gold and silver as well as the development of industries, such as the production of naval stores and the manufacture of wooden shingles.

The Virginia Company also sought the conversion of the heathen (that is, converting Indians to Protestant Christianity), the expansion of the English kingdom, increased revenues for the king, employment for the English vagrant poor, and a market for English manufactured goods.

Having been granted a Royal Charter, the Virginia Company in 1607 sent three ships to transport 120 colonists into Chesapeake Bay and establish a colony at Jamestown. For the next decade they would be in conflict with the Native American nations in the area.

The English looked upon the land as being un-owned and undeveloped in spite of the fact that they had to trade with the Indians who lived in the area for food. While the food sometimes included wild game, it was mostly from the crops which the Indians had planted and harvested. The English were delighted by some of the Indian crops, including strawberries (which were described as being larger and tastier than those in England) and persimmons. Persimmon bread was a common Indian gift.

Shortly after arrival, Captain John Smith led a small party up the Chickahominy River and was captured by a group of Powhatan (the tribe) under the leadership of Opechancanough. He was taken before the dominant chief, Powhatan (the title of a person), and was eventually released. Smith, described by his contemporaries as a self-promoting mercenary, reported that he had been kept in a comfortable and friendly fashion. Many years later he would tell a somewhat different story about being on the verge of being clubbed to death when a prominent woman intervened and saved his life. In one version of the story, he named Pocahontas (a nickname meaning the “spoiled child”) as the woman who saved his life (she was about 10 years old at the time). He told this story only after the death of Pocahontas and after she had gained some fame among the English.

In 1607, an exploring expedition from the Virginia Company at Jamestown traveled up the James River. When the group encountered some Indians in a canoe, the group’s leader, Christopher Newport, asked them for directions. One of them sketched a map of the river, its falls, and two native kingdoms beyond the falls. At the falls, Newport wanted to continue exploring on foot, but was told by Pawatah, a local village leader, that the Monacan would attack them for entering their territory.

In 1608, the English colonists found that most of their store were rotten or had been eaten by rats. The country-side around them had abundant game, and John Smith encouraged the colonists to live off the land. He sent groups to different places to gather food resources. However, many of the colonists preferred to get food by trading with the Indians. Consequently, materials were stripped from the fort so they could be traded to the Indians. Some colonists deserted to live with the Indians whose way of life they preferred.

The English introduced a new trade item to the Powhatan: sky blue Venetian glass beads. The traders told the Indians that these were a rare substance and that they were worn only by kings.

John Smith and a group of Englishmen travelled south on the Chesapeake Bay and up the Patuxent and Rappahannock Rivers. They had a short battle with the Mannahoac in which they wounded and captured Amoroleck. Amoroleck reported that there were four Mannahoac villages on the Rappahannock, each of which had its own leader. When asked what lay beyond the mountains, he indicated that he did not know as the woods were not burnt. The Indians regularly burned the forests to remove the underbrush and to enhance wild game and plants. Woods which were not burned were areas not used by the Indians, and hence “unknown.”

Captain John Smith attempted to obtain corn from the Pamunkey who were under the leadership of Opechancanough. When the chief indicated that he was unwilling to trade, the captain held a gun to the chief’s breast and threatened to kill him unless their boats were filled with twenty tons of corn. He also told the Pamunkey that if they did not fill his boats with corn, he would fill it with their dead carcasses.

The British in the seventeenth century felt that any legitimate government must have a monarch. In order to “elevate” the Powhatan to the status of a “real” nation, the English attempted to conduct a coronation ceremony for their chief. In this way, the chief would become a “king” and therefore a legitimate ruler in the eyes of the British. The ceremony was a comedy of cultural misunderstandings as the English attempted to choreograph a feudal ceremony in a society in which in two key elements of the ceremony – the crown and the act of bending the knee – were unknown.

One of the things that lured many English colonists to North America were the many rumors of gold and silver just waiting to be found. In 1608, the English colonists heard about an Indian mine in the interior. Lured by the possibility of gold, John Smith and six others with their Potomac guides in chains marched inland to the mine. They found a great hole dug with shells and hatchets. The mine, developed by the Indians to obtain minerals for making body paints, failed to yield any gold.

The first Anglo-Powhatan war began in 1609. The Powhatan felt that the advantages of trading with the English were not enough to warrant the difficulties which they caused. Part of the conflict came from the failure of the English to understand that the basis for the Indian economic system was generalized reciprocity: that is, one gives a gift to another to show that a social relationship exists and to reinforce that relationship and, in return, the recipient of the gift is expected to give another gift in return. When the colonists failed to make a return gift for a present of turkeys sent to them from the Powhatan, the relationship between the two groups was soured.

The violence between the two groups was sporadic and often disorganized. In one instance, the English were warned of an impending attack by Pocahontas. The English seemed to be unaware that her intervention may have been designed and implemented by the tribal council.

The English settlers were aided by Indian allies-Piscataway, Potomac, Nanticoke-who wanted to free themselves from Powhatan domination.

In 1609, an Anglican minister, Robert Gray, defended Indian ownership of the land which culminated in a general recognition of Indian land rights.

In 1610, chief Powhatan told the English settlers to leave his country or to confine themselves to their settlement at Jamestown. The English colonists were aware that the Indians could exterminate them if they so desired. The Powhatan stopped trading with the English and the colonists faced starvation because they could not obtain the corn and other food they needed from the Indians. It is reported that colonists ate their own dead to survive.

In one attack, the English colonists destroyed a Paspahegh town, killing the female leader (described as the town’s “queen”) and killing a number of women and children. The women and children were killed after they had been captured. The colonists also burned the town of the Queen of Appamatuck.

In 1613, becoming desperate because of inadequate food supplies, the English colonists sent a ship up the Potomac river in an attempt to reach the Patawamakes and establish friendly trading relations with them.  In establishing friendly relations with the Patawamakes, the English found out that Pocahontas, the favorite daughter of Powhattan, was living among them. They kidnapped her and held her for ransom. To the dismay of the English, no ransom was paid.

As a condition of her release from her English captors, Pocahontas agreed to marry John Rolfe and become known as Rebecca Rolfe. At the marriage ceremony in 1614, Pocahontas was given away by her uncle Opechancanough. Two years later, John Rolfe took Pocahontas to England where she was used as a part of the Virginia Company’s campaign to gain support for their American colonies.

By 1616, Opechancanough had talked the English into instructing his warriors in the use of the new snaphance muskets which used a flint-on-steel ignition. In exchange, Openchancanough allowed the English to give his people Christian instruction.

The first decade of Jamestown establishes the pattern of English settlement: while they rely on Indian help for their survival, they are insensitive to Indian concerns. They see the “solution” to the Indian “problem” in hard power: those who have the best weapons must be right, regardless of morality or law.