During the nineteenth century, particularly during the early part of the century, part of the American policy regarding American Indian nations was to invite selected leaders to journey to Washington, D.C. where they would be wined and dined and impressed with American wealth and military power. Meriwether Lewis and William Clark during their 1805-1806 journey across the continent invited a number of Indian leaders to visit the U.S. capital. 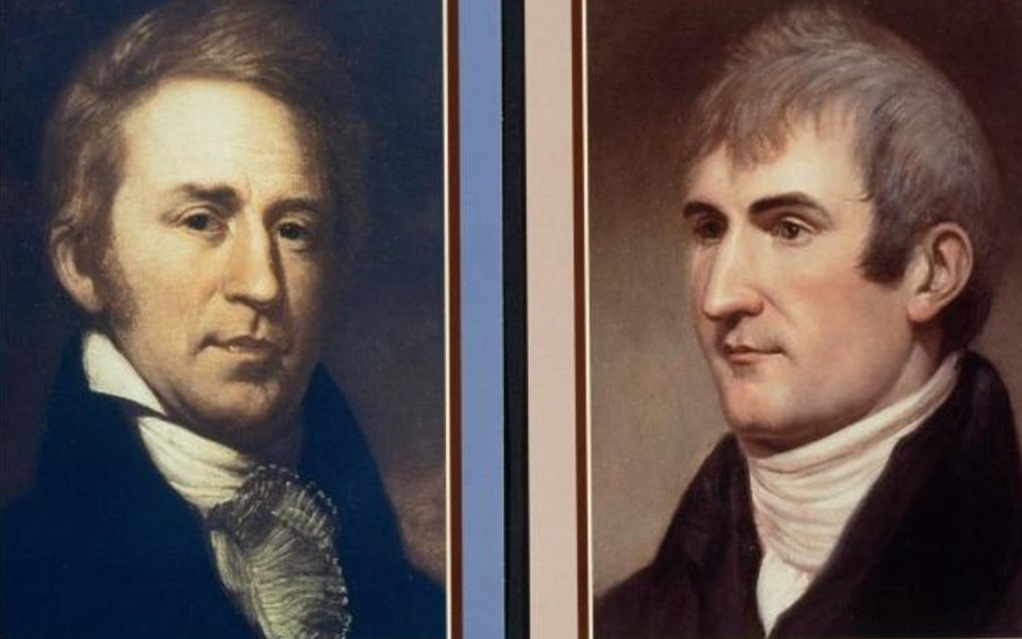 In North Dakota, Mandan peace chief Sheheke in 1805 described to William Clark the country between the Mandan villages on the Knife River and the Rocky Mountains. He described to Clark the Yellowstone River and the tributaries which ran into it. Working with Sheheke, Clark sketched a map of the country which helped guide the Corps of Discovery on their journey. Since Sheheke was viewed by Lewis and Clark as a “friend” of the Americans, he was invited to journey to Washington, D.C..

Two years later, Mandan peace chief Sheheke and his wife Yellow Corn journeyed from North Dakota to visit Washington, D.C., Philadelphia, Baltimore, and New York. The couple spent about ten weeks in the East. Outside of Washington, D.C., Sheheke’s visits attracted little media attention. There was little fanfare when he visited the other cities.

In Washington, D.C. , Sheheke attended a dinner in honor of Meriweather Lewis. There were 17 toasts to Lewis, two of which expressed American sentiments toward American Indians:

“The United States-who, by respecting the rights of her native children, has inspired them with reverence for her power, and affection for her laws.”

“The Red People of America-under an enlightened policy, gaining by steady steps the comfort of the civilized, without losing the virtues of the savage state.”

Following his tour of the east, Sheheke travelled to St. Louis where William Clark was the Indian agent for the newly acquired Louisiana Purchase territories. Here the United States government authorized an expedition to return Sheheke and his family to their home in North Dakota. The expedition of more than 100 people included traders August Chouteau and Pierre Dorian.

In South Dakota, the expedition was stopped by the Arikara who are angry with the United States over the death of chief Is-a-Whippoorwill in Washington, D.C. The expedition was told that it can go no farther and that the goods in the boat were to be theirs. A fight broke out. While the Americans were better armed, they were outnumbered and the Arikara warriors were well concealed. After 15 minutes, the military commander ordered a retreat to the boats and had them cast off. Thus Sheheke and his family were returned to St. Louis, not to their Mandan village.

Chief Is-a-Whippoorwill, like Sheheke, had been invited to visit Washington, D.C. and had journeyed from his South Dakota village to St. Louis by keelboat. He initially became ill in St. Louis and had asked to return home. His return, however, was blocked by a hostile encounter between his military escort and the Kansas tribe. Subsequently, he travelled to Washington, D.C. where he met with President Thomas Jefferson. Shortly after this meeting, Is-a-Whippoorwill died. The government designated trader Joseph Gravelines to go to the Arikara villages and break the news to them. The trader was to distribute gifts worth two or three hundred dollars to the deceased chief’s wives and children. The Arikara were not happy with the news and the trader was roughed up before being allowed to leave.

In 1809, the Missouri Fur Company signed an agreement with the federal government to return Sheheke to his village in North Dakota. Under the agreement, the fur company was given an exclusive, though temporary, license to carry on commerce above the Platte River and to act as an official militia of the Louisiana Territory. The company was to provide the chief and his family with accommodations and provisions. Above all else, the chief and his family were to be protected from any harm. After a journey of three years and more than 6,000 miles, Sheheke finally returned to his home. The Mandan villagers came en-mass to greet the barges and their returning chief.

Sheheke was killed in 1812 in a battle between the Mandan and Hidatsa. The Hidatsa, under the leadership of Le Borgne, considered themselves to be allies of the English, while the Mandan, particularly Sheheke, were closely allied with the Americans. Some historians feel that this battle should be considered a part of the larger War of 1812.

For more information about Sheheke see:

Indian Affairs During the Coolidge Administration