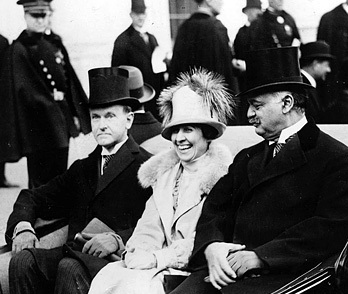 In 1923, in an effort to increase the suppression of American Indian religious freedom and to assimilate Indians into American society, the Commissioner of Indian Affairs updated the list of Indian offenses-activities for which Indians were to  be punished. The Commissioner suggested that maypole dances be used as a substitute for traditional Indian dances at Indian schools. He was apparently unaware that the maypole dances were survivals of European pagan fertility dances around phallic icons.

Indian Commissioner Charles H. Burke  renewed his campaign against Indian religions in 1924 and declared Indian ceremonies to be obscene and sadistic. He felt that native religions prevented the full assimilation of Indians into American life.

The most important change in federal Indian policy came about in 1924 when Congress passed, and President Coolidge signed, the Indian Citizenship Act. Giving all Indians citizenship was viewed as a continuation of the government’s efforts to assimilate Indians into mainstream society. There was an expectation that tribal governments would disappear and Indians would become like other immigrants to the United States.

Many of those who promoted Indian citizenship felt that it would give the Indians the freedom to practice their religion under the Bill of Rights and that it would reduce government control over Indian lives. However, the Indian Office (now the Bureau of Indians Affairs) interpreted the granting of citizenship as not affecting its authority over the tribal and individual property of Indians. The Indian Office assumed that they would continue to exert control of Indian lives, property, and resources.

The United States, with regard to Indian affairs, has functioned as a theocracy in an attempt to force Christian laws on Indian people. Ignoring the possibility of religious freedom for Indians who had been granted citizenship two years before, Congress considered a bill drafted by the Indian Office which would formalize reservation courts of Indian offenses. The bill would prohibit traditional Indian marriages and divorces, giving the superintendents the power to issue marriage licenses. Hearings on the bill showed much opposition, including testimony from tribes who rarely testified before Congress. The hearings demonstrated that the Indian Office had little understanding of or empathy for the rights of Indians.

Part of the repressive force of the federal government’s Indian policy focused on the Pueblos in New Mexico. Sunset magazine published an article by John Collier in 1923 in which he stated: “The Pueblos are fighting desperately against quick destruction.” According to Collier, those opposing the New Mexico Pueblos were land grabbing interests and the executive branch of the federal government. He appealed to Americans to use their voice and vote to prevent the continuation of the poor treatment of Indians.

The Council of All the New Mexico Pueblos issued a long response to the government’s attack on their religion in 1924. In this response they asked for

“Perfect toleration of religious sentiment shall be secured, and no inhabitant of this state shall ever be molested in person or property on account of his or her mode of religious worship.”

In 1926, Commissioner of Indian Affairs Charles H. Burke visited Taos Pueblo in New Mexico, told the elders in the tribal council that they were “half animals” because of their pagan religion, and then had the entire governing body of the Pueblo thrown into jail for violating the Indian Office religious crimes codes. Prior to the speech, Burke had told the Indian Office that the Pueblos must rid themselves of their native religion within a year.

In response to the open attempts by the federal government to suppress their religion, the All Indian Pueblo Council met at Santo Domingo Pueblo. The Council had strongly opposed the government’s attempts to eradicate their religion. In response, Indian Commissioner Burke had designated the Council as “unauthorized” and was attempting to replace it with a council which would be controlled by the Indian Office. The All Indian Pueblo Council unanimously voted to continue and to expand their existing Indian-controlled council.

Five Hopi visited Washington, D.C. and presented four tribal religious dances before an audience of 5,000. The Hopi wished to show people, including Vice President Charles Dawes and two Supreme Court justices, that their ceremonies were not cruel rites.

In 1923, the federal government unilaterally replaced the traditional Navajo council of elders with a Grand Council composed of government selected individuals. While the new council was to be composed of delegates elected by each of the six jurisdictions on the reservation, delegates could be appointed if there was no election. The Indian Office could also remove or replace any delegates.

All of the Council were Navajos who had been educated off of the reservation. The Council could meet only in the presence of the Commissioner to the Navajo Tribe. Former Navajo chairman Peter MacDonald has noted:

“For the first time in the history of the Navajo Nation, the idea of a single leader was created. A twelve-member tribal council was established whose representa¬tives were to replace the traditional extended family leaders.”

The new Council, the only Navajo government recognized by the U.S. government, quickly signed leasing permits with a group of mining companies. It was clear that the federal government did not intend to create a self-governing tribe, but one which would negotiate property matters in the best interest of non-Indian businesses. The tribal council was intended to serve the interests of the oil companies.

Chee Dodge, a wealthy stockman, was elected as Chairman. A split soon developed in the council. Dodge, a Catholic, felt that the royalties belonged to all of the Navajo and should be used to buy land for the impoverished Navajo stockmen. Another group, under the leadership of Jacob C. Morgan, a fundamentalist Protestant missionary, felt that traditionalists such as Dodge were not qualified to lead. Under Dodge’s leadership the council gave the Indian agent the power of attorney to negotiate and sign all leases on behalf of the tribe.

In 1908, Supreme Court in a decision known as the Winters Doctrine had found that Indian water rights dated from the establishment of the reservation and that all water claims after the establishment of reservations were to be subordinate or junior to Indian water rights. Both the federal government and the states ignored this Supreme Court ruling. In 1923 the seven Colorado River Basin states negotiated a compact which divided the river’s water among themselves. The negotiations were chaired by Herbert Hoover. Absent from the negotiations were any of the tribes whose rights would be diminished by this agreement. The tribes had not been invited.

In 1927, the Commissioner of Indian Affairs met with representatives of the Montana Power Company to discuss the development of a hydroelectric site on the Flathead River south of Polson, Montana. An agreement was reached which gave Montana Power the right to generate power. While the dam site is on the Flathead Reservation, no Indians were invited to the meeting.

The agreement was criticized by John Collier who maintained that it violated the 1855 treaty with the Flatheads. Collier also pointed out that the Federal Water Power Act of 1920 promised Indians all royalties from reservation lands and that the agreement with Montana Power only gave the Indians one-third of the royalties. Collier also questioned why the agreement gave non-Indian settlers on the reservation electricity at cost.

The American Indian Defense Association (AIDA) was founded in 1923. This was an organization composed primarily of middle to upper class non-Indians which was dedicated to Indian rights. John Collier (who would become Commissioner of Indian Affairs during the Roosevelt administration) served as the organization’s executive secretary. AIDA maintained an office in Washington, D.C. to be able to lobby Congress regarding Indian poverty, the granting of greater cultural and religious freedom for Indians, and recognizing tribal organizations.

As a part of the process of assimilation promoted by the federal government, Indians were encouraged, and often forced, to assume European-style names. James McGregor reported to Commissioner of Indian Affairs Charles Burke in 1927:

“The ridiculous and uncouth names that many of our Indian young people have is becoming embarrassing, and I am wondering if it is possible to consider changing some of these names to more modern names that will not, at least, be a handicap to the students.”

The recommended solution was to change the Indian names into more conventional European names.

In 1929, Herbert Hoover was sworn in as President of the United States. His Vice President, Charles Curtis, was Kaw and the descendent of the Osage chief Pawhuska and the Kaw chief White Plume. An Indian jazz band performd at the inauguration. Indian policy continued to focus on the assimilation of American Indians.