During the Revolutionary War, many Indians allied themselves with their old trading partners, the British. For the six tribes of the Iroquois Confederacy, the divided loyalties led to the ritual covering of their council fire so that each nation was free to choose sides. At the 1777 Battle of Oriskany, for example, the pro-British Iroquois under the leadership of Joseph Brant (Mohawk) and Chainbreaker (Seneca) fought against the pro-patriot Iroquois under the leadership of Nonyery Tewahangaraghkan (Oneida). Following the war, the Indian allies of the British expressed anger and disbelief as the British handed over their Indian lands to the Americans. The Americans seemed determined to extract retribution from all Indians regardless of whether they had fought for or against the Americans. As a result many Indians, including many former British allies, fled north to Canada. 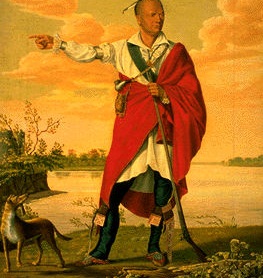 In 1783, Joseph Brant accepted new lands along the Grand River, just north of Lake Erie, for the Iroquois League of Six Nations who had remained loyal to the British during the American Revolution. The land was viewed as compensation for their loss of land in New York. Brant was also commissioned as Captain of the Northern Confederate Indians.

In New York, Joseph Brant met with the chiefs of the Iroquois League of Six Nations and invited them to join with him in his reserve in Ontario. He felt that the British government would serve the Iroquois better than the new American government. The chiefs entrusted the decision to the clan matrons. The clan mothers decided that the Six Nations should divide, with half in Canada and half in the United States.

The following year, a group of 1,843 Iroquois Loyalists under the leadership of Joseph Brant settled in Ontario. The group included members from all six of the Iroquois League (though most were Mohawk and Cayuga) as well as some Delaware, Nanticoke, Tutelo, Creek, and Cherokee. The migrants settled in small tribal villages along the Grand River.

The Mississauga sold their land claims to Joseph Brant so that the Mohawk could have clear title to their new territory. Mississauga leader Pokquan announced:  “We are Indians, and consider ourselves and the Six Nations to be one and the same people, and agreeable to a former, and mutual agreement, we are bound to help each other.”

In their new Ontario home, Joseph Brant and others built the Mohawk Chapel (Anglican) in the Mohawk village. The church housed the Queen Anne Silver Communion Plate and Bible which had been given to the Mohawk in 1710 when the chapel at Fort Hunter, New York was built.

In 1785, Mohawk leader Joseph Brant talked with the Mohawk under the leadership of Captain John Deserontyon about joining him at the Grand River. Deserontyon, however, prefered to remain in his own village.

While Joseph Brant was generally recognized by the British as the leader of the Iroquois and other tribes in the Grand River area, there were some Indians who were not happy with his leadership. In 1788, Captain Aaron and Captain Isaac attempted to assassinate Mohawk leader Joseph Brant. When the attempt failed, they fled to the Mohawk village of John Deserontyon who welcomed them to his community.

In 1792, two Mohawk men—Hendrick and Kellayhun—murdered a French Canadian trader. The British military commander demanded that the chiefs surrender the two men so that they could stand trial under British law. Instead of surrendering the men, the chiefs asked that they be allowed to cover the grave with gifts for the relatives of the deceased. This was a traditional Native practice in resolving the crime of murder. According to Joseph Brant: “We have forms and Ancient Customs which we look upon as Necessary to be gone through as the Proceedings in any Court of Justice.”

From the Indian view, to accept British legal jurisdiction would be to deny their own sovereignty. The British, on the other hand, viewed the Indians as British subjects and therefore subject to British law. The case was suspended rather than dropped.

In 1793, John Graves Simcoe, the lieutenant governor of Upper Canada, drafted the Simcoe Patent which stipulated that all land transactions of the Iroquois Six Nations would have to be approved by the Crown. Simcoe insisted that Indians had always mishandled their land. Mohawk leader Joseph Brant and the other Iroquois chiefs, however, rejected this concept. According to Brant:  “It seems natural to Whites to look on lands in the possession of Indians with an aching heart, and never to rest ‘till they have planned them out of them.”

The Iroquois had sold or leased several large blocks of land to non-Indians because Brant felt that the non-Indians would provide useful models for the Iroquois.

In 1795, Isaac Brant, the eldest son of Joseph Brant, killed a deserter from the American army. Isaac Brant was known to have a temper, particularly when he was drunk. Furious because a saddle had not been completed on time, he buried a tomahawk in the deserter’s brain. Brant was convicted of murder by a jury, but the Iroquois chiefs insisted that the victim’s grave be covered instead. While the British military commander wanted to send in troops to retrieve Isaac Brant, the governor, wishing to avoid bloodshed, delayed. The situation was solved when Isaac Brant attacked his father in a drunken rage and Joseph Brant killed his son in self-defense.

In 1795, Joseph Brant was authorized by the Six Nations to sell large blocks of land directly to speculators who were lusting after the fertile land. The land was sold for 18 times what the government had offered for it.

In 1798, in order to disrupt the alliance between the Mississauga and the Six Nations Iroquois, the government established a separate agency for the Mississauga at York. The Mississauga protested the change and indicated that they wanted to continue their affiliation with the Iroquois.

In order to show that Indians had military importance to Ontario, in 1798 Joseph Brant convened a muster of 400 Indian warriors and a settler militia company.

Joseph Brant died on his estate near Brantford, Ontario in 1807. He was 67 years old.