During the nineteenth century linguists—scholars who are engaged in the scientific study of language—began to adopt a biological model of language development in which they viewed languages evolving in much the way that organisms had. With this model, linguists were able to put together family trees which provide a simplified genealogy of a language’s development and relationships. This genealogy groups related languages together into language families. With regard to American Indians, the study of language families helps us understand the relationships among different tribes, their histories, and their migrations. 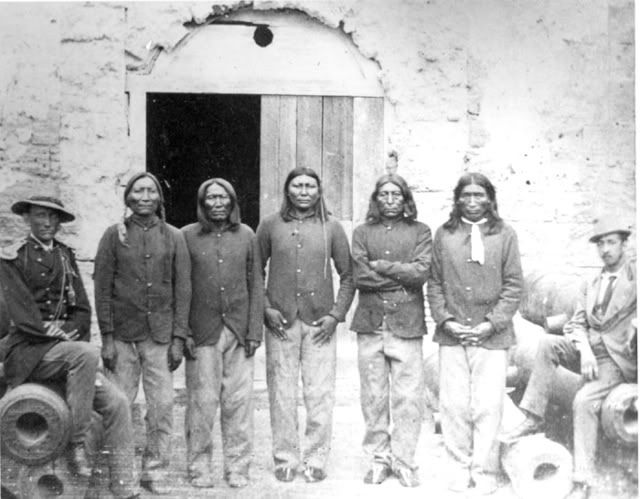 The California culture area of Native Americans includes seven major language groups and more than 100 languages. This means that this area is the most linguistically diverse culture area in North America. The oldest language family in California is Hokan which includes Chimariko, Palaihnihan, Yana, Esselen, Salinan, Karok, Pomo, Shasta, Seri, and Washo. Several of these languages are not well-known as they are endangered or extinct.

Some linguists feel that Hokan may have been the language first spoken by American Indians 20,000 years ago. According to one hypothesis, Hokan speakers may have originally inhabited the great intermountain basin north of the Grand Canyon. Eventually, the Uto-Aztecan speakers moved north into this area and displaced the Hokan speakers.

Outside of the California Culture Area, the Coahuiltecan-speaking people of the Western Gulf Culture Area in Texas and Mexico appear to be related linguistically to the Hokan.

The Chimariko language was spoken by only a few hundred people in the Trinity River area. There are no known speakers at the present time.

The Palaihnihan group includes two languages: Achumawi and Atsugewi. These two languages are the most closely related in the Hokan Family. There were an estimated 3,000 Palaihnihan-speakers in aboriginal times.

Achumawi is nearly extinct at the present time with only older adults speaking the language. All speakers are considered semi-speakers or passive speakers. Some linguists have reported that there were originally nine dialects of Achumawi.

Very little is known about the Esselen language which was spoken by only a few hundred people in the area around the Carmel River and the Big Sur coastal area. Esselen was the first Native American language in California to go extinct after Spanish colonization. During the mission era, a few word lists were collected. There are currently attempts to revive this language.

The Salinan language was spoken by about 2,000 people and had two or three major dialects, including Antoniano and Migueleño. There are presently no known speakers of this language. The last speakers died in the early 1960s. There is, however, interest at the present time in language revival.

In aboriginal times there were an estimated 1,500 to 2,000 Karok speakers. Presently there are only 10 speakers. This language is the most distantly related of the Hokan languages.

The Pomoan group includes seven languages which are designated by area: Northeastern, Eastern, Southeastern, Northern, Central, Southern, and Southwestern. One of the interesting features about Central Pomo is the remarkable array of prefixes. Using the root yól which means “to mix” some examples of prefix use include:

s- means “by sucking and thus syól means “to wash down cookies or doughnuts with coffee; that is, to mix by sucking”

m- means “with heat” and thus myól means “to throw various ingredients into a pot; that is, to mix by heating”

qa- means “by biting” and thus qayól means “to eat several things together, such as meat and potatoes; that is, to mix by biting”

By 2000, it was estimated that there were only 255 speakers of the Pomoan languages. Of these, 45 are between the ages of 5 and 17, including 15 with limited English proficiency.

The Shastan group consists of four languages: Shasta, New River Shasta, Okwanuchu, and Konomihu. There are currently no known speakers of this language.

The Seri people live along the Sonora, Mexico coast. The language is still spoken by all age groups. Some linguists feel that this is a language isolate rather than a part of the Hokan language family.

Washo is the only language in the Great Basin culture area which is not a part of the Numic division of the Uto-Aztecan family. While the 2000 Census counted 252 Washo-speakers, there are some who feel that there are only about 10 fluent speakers.

Shellfish and The California Tribes