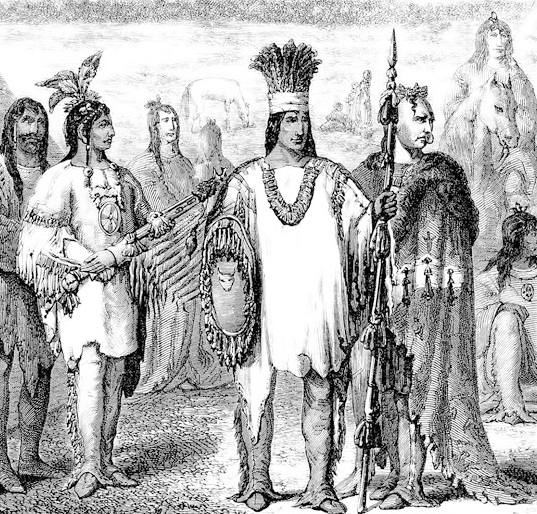 The 16th century marked the beginning of the European invasion of North America. The Spanish had already firmly established themselves in the Caribbean islands and were attempting to move north into Florida. The Portuguese had explored the coast of what would become Canada. European interests in the Americas were fueled by stories of great wealth and by new maps showing the region: Juan de la Cosa’s 1500 map commissioned by the Spanish King and Martin Waldseemuller’s 1507 map using the term “America” to designate the new territories.

In 1508, Giovanni da Verrazano, an Italian working for the French, sailed as a navigator on a fishing vessel which explored the area of Newfoundland and the St. Lawrence River in Canada.

In 1523, King Francis I of France asked Verrazano to explore the American coast from Florida to Terranova (Newfoundland) with the goal of finding a possible sea route to the Pacific Ocean. His exploration of the American coast began in 1524. Making landfall near Cape Fear, North Carolina, the French ships then sailed northward to Maine making contact with Native American groups at several locations. In New York Bay, Verrazzano noted that the country was well inhabited.

The Verrazano party made contact with the Narragansett, Mahican, Wampanoag, Abnaki, Pokanoket, and Penobscot. Verrazano reported that he and his crew were treated well by the Natives they encountered. The Europeans and the Indians shared meals and the Indians often organized sporting games for their mutual entertainment.

In Narragansett Bay Indians came on board the ship. According to Verrazano:  “They exceed us in size, and they are of a very fair complexion, some incline more to a white and others to a tawny color; their faces are sharp, and their hair long and black, upon the adorning of which they bestow great pains; their eyes are black and sharp, their expressions mild and pleasant, greatly resembling the antique.”  In a letter to the King of France Verrazano wrote that the Narragansett  “are the most beautiful and have the most civil customs that we found on this voyage.”

Verrazano also observed that the Indians set their planting times according to their observations of the moon and the rising of the Pleiades. In other words, they understood some of the basics of astronomy.  While Verrazano did not speak any Indian languages, he concluded:  “We think they have neither religion nor laws.”

All European explorers, such as Verrazano, were guided by the Discovery Doctrine, a legal fiction which declared that Christian nations have a right, if not an obligation, to govern all non-Christian nations. If there were no evidence of Christianity, then most Europeans felt that the Indians did not have religion. Furthermore, if there was no controlling church-state hierarchy, then there were no laws.

As with other European explorers, Verrazano attempted to kidnap some natives to take back to Europe. At Cape Fear, North Carolina, he encountered an old woman, two infants, a child and a young woman. He later wrote:  “We took a child from the old woman to bring into France, and were about to take the young woman, who was very beautiful and of tall stature, but we could not for the great outcries that she made.”

In Maine, Verrazano found that the Indians were not friendly. It is likely that the Native people of this area had already had some unpleasant encounters with Europeans as the English from Bristol, the Portuguese, and the Basques had been fishing in this area for several years. Some of the fishing vessels had also been trading with the natives. In 1507, for example, Norman fishing vessels captured seven Beothuk in Newfoundland and brought them back to France and by 1519 European fishing boats were trading with the Micmac in Maine and the Maritime Provinces.

Explaining Indians in the 19th Century