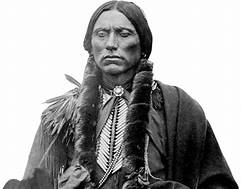 The Comanche held a Sun Dance in Oklahoma in 1874. This was not a traditional ceremony, but was one they had borrowed from the Cheyenne. The Sun Dance coincided with the emergence of a new medicine man, Eschiti (Coyote Droppings; also spelled Esa-tai). Bill Neeley, in his book The Last Comanche Chief: The Life and Times of Quanah Parker, describes him this way:  “He wore no buffalo skull cap or ceremonial mask, as did most of the older medicine men, but was attired only in breechclout and moccasins and a wide sash of red cloth around his waist. From his hair protruded a red-tipped hawk’s feather, and from each ear hung a snake rattle.”

Eschiti had been given strong powers in a vision quest. Eschiti had ascended to the home of the Great Spirit, a place which is far above the Christian Heaven. It was reported that he was capable of vomiting up all the cartridges which might be needed for any gun; that he could raise the dead; that he was bulletproof and could make others bulletproof; that he could control the weather. His messianic message to the people was that he was sent by the Great Spirit to deliver them from oppression.

Later that year, in the panhandle of Texas, buffalo hunters armed with high powered telescopic rifles capable of killing buffalo at 600 yards, set up camp at the abandoned trading post of Adobe Walls. The camp was attacked by a war party of about 300 warriors made up of Comanche, Cheyenne, Kiowa, and Arapaho. War party leaders include Tabananaka, Wild Horse, Mowaway, Black Beard, and a rising new leader, Quanah. The Indians were confident that Eschiti’s power would render the hunters’ guns useless. Eschiti warned the warriors not to kill a skunk on their way to Adobe Walls. According to Eschiti’s vision, the hunters would be asleep and would not be able to use their big guns.

Just as the war party prepared to attack the sleeping buffalo hunters, there was a loud crack which woke them up. The hunters, fearing that the ridge pole had snapped, were suddenly awake and scrambling around. The hunters settled down for the siege, and with plenty of ammunition and good marksmanship, they repelled the war party.

Eschiti attributed the failure of his medicine to a member of the war party violating a taboo by killing a skunk. Apparently some of the Cheyenne warriors had killed a skunk, which was not unusual since skunk meat was often a favorite of the Southern Plains Indians.

This second battle of Adobe Walls began an Indian war known as the Red River War or the Buffalo War. Army troops were called in to capture the war party, but movement was hampered by drought and by temperatures well over 100 degrees. Eschiti took credit for arranging the weather. The troops, however, were relentless and managed to destroy lodges and capture horses.

In the battle of Palo Duro Canyon, the Cavalry scattered the warriors under the command of Iron Shirt (Cheyenne), Poor Buffalo (Comanche), and Lone Wolf (Kiowa). There were few casualties, but the Americans killed more than 1,000 horses and destroyed the Indians’ winter food supply.

The Red River War was the last major conflict between the Southern Plains Indians and the U.S. Army. Historian Herman Viola, in his book Warrior Artists: Historic Cheyenne and Kiowa Indian Ledger Art, writes:  “The Red River War marked a last desperate and hopeless resistance to the new order.”

With the end of the war and the failure of his medicine, Eschiti faded into obscurity.