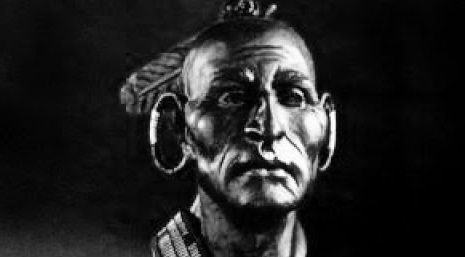 In 1762 the Delaware (Lenni Lenape) prophet Neolin, who was living in Ohio, had a vision in which he undertook a journey to meet the Master of Life. He was told:

“The land on which you are, I have made for you, not for others. Wherefore do you suffer the whites to dwell upon your lands?”

“Drive them away; wage war against them; I love them not; they know me not; they are my enemies; they are your brothers’ enemies. Send them back to the land I have made for them.”

He received a prayer which was carved in symbolic language on a stick.

After returning from the vision, the prophet drew a map on a deerskin which was used in explaining his vision. This “great book” was sold to followers so that they might refresh their memories from time to time. The book showed the path of the soul from life to the afterlife.

Neolin’s vision provided the foundation for a pan-Indian movement. The influence of his religious movement spread throughout the Indian tribes in the Mississippi valley. Hundreds of Indians from different tribes were soon following his teachings. The pan-Indian nature of the movement overcame traditional animosities and created a new sense of cultural identity among the tribes. One of Neolin’s followers was the Ottawa chief, Pontiac.

Neolin’s followers went back to the old, traditional ways of Indian life. This meant that they gave up the use of firearms and hunted only with the bow and arrow. They ate dried meat and they drank a bitter drink recommended by Neolin. The drink had a purgative quality which was supposed to get rid of the poisons which their bodies had consumed as a result of European influence. They also dressed in animal skin clothing instead of the imported European cloth.

Neolin’s teaching opposed alcohol, materialism, and polygyny. He emphasized that if the Indians gave up the evil ways brought to them by the Europeans that the Master of Life would bless them with plentiful game.

According to ethnologist James Mooney, writing in 1896:

“The religious ferment produced by the exhortations of the Delaware prophet spread rapidly from tribe to tribe, until, under the guidance of the master mind of the celebrated chief, Pontiac, it took shape in a grand confederacy of all the northwestern tribes to oppose the further progress of the English.”

While Neolin’s message was anti-European, under Pontiac it became anti-British.

Many of Neolin’s followers felt that he was the reincarnation of Winabojo, the great teacher of the mythic past.

In 1763, Neolin urged the Three Fires Confederacy in Michigan-Ottawa, Ojibwa, and Potawamani-to expel the British and to join in Pontiac’s uprising.

Following the collapse of Pontiac’s Rebellion in 1765, Neolin’s influence as a pan-Indian spiritual leader waned.

Written history has recorded neither when Neolin was born nor when he died. In the historic record-the one maintained by non-Indians-he appears only as a brief note relating to Pontiac.