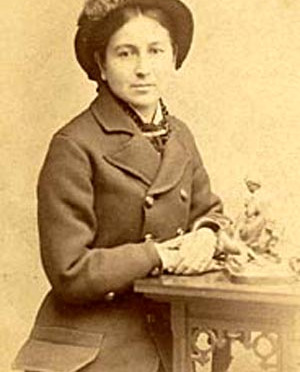 “Joseph La Flesche was a remarkable and far-seeing leader who realized that both his children and his tribe would have to adapt to and make their way in white America. He did all in his power to influence his often reluctant tribesmen to move in that direction, and he inspired his children to seek education in the English language and in American life and culture.”

Susette grew up on the Omaha Reservation and attended the Presbyterian mission school. In 1872, non-Indian philanthropic groups made it possible for her to attend the Elizabeth Institute for Young Ladies in Elizabeth, New Jersey.

After graduating from the Elizabeth Institute in 1875, she returned to the Omaha Reservation with the intention of teaching. She applied for the position of elementary school teacher at the Indian Agency school on the reservation, but failed to get the job. She was told that she had to pass a teaching examination from the School Committee of Nebraska. When she applied for permission to leave the reservation to take the examination, her request was refused. She left the reservation without permission and took the test.

Later, she discovered that the Indian Office (now the Bureau of Indian Affairs) had a policy which required that Indians be given preference for positions in the Indian Service, including teaching positions. With this information, she wrote to the Commissioner of Indian Affairs in Washington, D.C. She demanded that she be given preference and in 1877 she obtained a teaching job at the Omaha Agency school. She was paid just half of what non-Indian teachers received.

Events far to the south, in Indian Territory (now Oklahoma), would, however, soon impact her life. In 1877, the United States government had forcibly and brutally moved the Ponca from their Nebraska reservation to Indian Territory. The Ponca had always been at peace with the United States. At sunrise, army troops—four detachments of cavalry and one of infantry—surrounded the Ponca village and dragged men, women, and children from their cabins.  The Ponca were force-marched for 50 days to their new home where they were informed that they were now prisoners of war. During the next year, one-fourth of the Ponca died.

Among those who died of malnutrition was Bear Shield, the eldest son of Ponca chief Standing Bear. His dying wish was to be buried in the traditional Ponca land. Standing Bear decided to return north to Nebraska to bury him in traditional Ponca territory. In 1879, Standing Bear and about 65 of his people left their Oklahoma reservation and traveled to Decatur, Nebraska where they were welcomed by the Omaha and given food and shelter.

The Ponca and the Omaha are closely related tribes. At one time they had been a single people and when they had moved from the Ohio Valley into the Central Plains about 1715 they separated into two distinct tribes.

The Department of the Interior notified the War Department that the Ponca had left without permission and the army was ordered to return them to the reservation. The Ponca were detained by the army at Fort Omaha, but illness among the Indians and the poor condition of their horses made it impossible to return them to Indian Territory immediately.

While the Ponca were being held captive, Thomas Henry Tibbles, the assistant editor of the Omaha Herald, began to stir up public support for the Ponca. Tibbles arranged for a writ of habeas corpus on behalf of Standing Bear and his people in federal court in Omaha. The court found that the army had no authority to incarcerate the Ponca. The U.S. Attorney had argued that Indians were not persons under the law and therefore were not entitled to a writ of habeas corpus. Historian James King, in an essay in The Western American Indian: Case Studies in Tribal History, writes:

“The government’s case was simply that an Indian was neither a person nor a citizen within the meaning of the law, and therefore could bring no suit of any kind against the government.”

In Standing Bear versus Crook the United States District Court declares that an Indian is a “person” under United States law and therefore has the right to sue for a writ of habeas corpus in federal court.

Tibbles wanted to take the Ponca case to the Supreme Court so that a definitive statement on the status of Indians in the United States could be obtained. He also wanted to help the Ponca regain a Nebraska reservation. In order to gain support for the Ponca, Tibbles sent Omaha chief Joseph LaFlesche and his daughter Susette to Indian Territory to investigate the conditions which the Ponca had to endure. Upon their return, Susette La Flesche made her first appearance as a public speaker supporting the Ponca cause.

Kenny Franks, in his essay on the LaFlesche family in Encyclopedia of North American Indians, reports:

“Susette was convinced that the only solution to the ‘Indian problem’ was American citizenship. Such an action would legally give the nation’s Native American population equal status with its other residents.”

To take the Ponca case to the Supreme Court would require money. Therefore, Tibbles decided that a speaking tour featuring Ponca chief Standing Bear would be an effective way to raise both money and public support for their cause. Standing Bear, however, spoke no English. The Ponca and Omaha languages are closely related so Tibbles asked if Susette La Flesche could accompany them as an interpreter. Tibbles also suggested that Susette use the name Bright Eyes for the tour.

The tour began in Chicago in 1879. By the time they reached the Northeast, there were eager crowds waiting to hear from Standing Bear and Bright Eyes. In the Northeast, the speaking tour drew packed audiences five to seven nights a week.

The tour stayed for a month in Boston. At a presentation in Worchester, Massachusetts, U.S. Senator George F. Hoar was moved by what he heard. He wrote to President Rutherford B. Hayes expressing his concern at the wrong done to the Ponca by the American government. The President replied that he would give the matter attention.

Their visit to Boston resulted in the formation of an Indian Citizenship Committee composed of a number of prominent non-Indians.

They returned to Nebraska in 1880. John Little reports:

“La Flesche Tibbles, or Bright Eyes, had by now become a well-known public figure who would find a ready audience for both her speeches and writings for the rest of her life.”

In 1881, Thomas Henry Tibbles married Susette La Flesche (thus she also became known as Susette La Flesche Tibbles). The couple made frequent lecture trips to the eastern United States and made one lecture tour of England and Scotland in 1886-1887. Carl Waldman, in his book Who Was Who in Native American History, reports:

“In their lectures, they described Omaha and Ponca reservation conditions and argued against removal and in favor of assimilation.”

Working with Standing Bear, she co-authored Ploughed Under: The Story of an Indian Chief. In 1881, she presented a paper “The Position, Occupation, and Culture of Indian Women” before the Association for the Advancement of Women.

Writing under the name Bright Eyes, Susette La Flesche Tibbles wrote for a number of magazines. Her writings including stories about Indian life for children’s magazines as well as adult stories.