The Columbia Plateau refers to the area between the Cascade Mountains and the Rocky Mountains in Washington, Oregon, Idaho, British Columbia, and Western Montana. Many of the Indian nations in this region, such as the Sanpoil, speak languages which belong to the Salish language family. For many of the Salish-speaking tribes, prophecy was an important part of their spirituality. Prophecy is a traditional way of knowing the future and is used to predict such events as salmon runs and war party success. In most cases, prophets were men and women who had died and then come back to life. The prophet would usually return to life with a special vision resulting from their journey to the land of the dead.

Among the Salish-speaking tribes of the upper Columbia River it was necessary to have a guardian spirit to obtain any success in life. Consequently, both boys and girls at about the age of puberty were sent out to spend some time alone so that a guardian spirit would reveal itself to them.

Like other Sanpoil youth during the last half of the nineteenth century, Kolaskin (also spelled Skolaskin) obtained a guardian spirit. It was not a particularly powerful one, but he proved to be a likeable young man. When he was about 20 years old, Kolaskin became very ill. He developed sores and his legs became flexed. Soon he was unable to straighten them out. He tried herbal remedies, but they failed to work. Medicine people tried to cure him, but they also failed.

After two years of living in pain, Kolaskin went into a coma and people thought that he had died. As they were preparing his body for burial, Kolaskin came back to life. He began to sing a song which no one had ever heard. He announced that his pain was gone and that he had received a great revelation while dead.

While Kolaskin regained the ability to walk, his knees remained permanently flexed. This meant that he had to walk in a stooped position with a hand on each knee.

At this time, Kolaskin was living among the Spokan as his own parents were dead. He began preaching to the Spokan that people should not drink alcohol, steal, or commit adultery. People were to pray to the new god-called Sweat Lodge-each day when they arose and before eating. Every seventh day was to be devoted to praying and singing. On this day there was to be no work, no dancing, and no gambling. People were to be kind and friendly to everyone.

Kolaskin made only a few converts among the Spokan before returning to the Sanpoil. He took up residence at the village of Whitestone and he was hailed by the Sanpoil as a great prophet. Nearly all of the Sanpoil converted to the new religious movement.

At Whitestone, Kolaskin built a structure in which he could hold his meetings. On Sundays, there would be one or two meetings during which he would teach prayers and songs addressed to Sweat Lodge. He would tell of his revelation while dead and of his miraculous cure.

At Whitestone, Kolaskin received a second revelation. He saw the coming of a great flood which was to arrive in ten years. To avoid destruction by this flood, he had a sawmill built near the church to produce lumber for making a boat. Those who would board the boat-both humans and animals-would be saved. Although the lumber was cut for the boat, the boat itself was never actually built.

In 1873, Kolaskin predicted that another disaster was going to occur. Then, on November 22, 1873, a major earthquake shook the region with tremors and aftershocks lasting until spring. With this successful prediction, his reputation was enhanced. He gained many followers among the Spokan and Southern Okanogan. Even many of the Protestant Christian Spokan began to follow this new path.

For those who failed to live up to his expectations, Kolaskin had a jail built. The jail was essentially a pit which was covered with boards. Kolaskin then appointed policemen who acted as judges to determine who should be imprisoned. People were jailed for minor offenses and forced to live on a starvation diet while in jail. This created some ill-will toward Kolaskin.

Finally, two of Kolaskin’s prisoners escaped and his police went in search of them. One of the prisoners was found, and when the police attempted to tie him up to take him back, the prisoner’s uncle came to his aid. He shouted that Kolaskin was always making trouble. Kolaskin had the uncle tied up and taken to the jail. Another nephew entered the fray, and Kolaskin’s policeman shot him dead.

The dead man’s family took the body to Whitestone for burial. They then stormed the jail and released the uncle and the nephew. They attempted to burn the jail, but could not get the fire going.

The Indian agent had Kolaskin and his policeman arrested. While the policeman-the man who actually did the killing-was released, Kolaskin was sent to the McNeil Island prison for three years. Upon his return to the Sanpoil, Kolaskin tried to disband his religious organization. He told the people that his teachings were wrong, but many continued to follow the new path.

Following his release from prison, Kolaskin continued to function as the chief of Whitestone. In this position, he advised his people not to accept anything from the Americans as the Americans would try to steal the Sanpoil land. He continued to practice as a traditional medicine man. 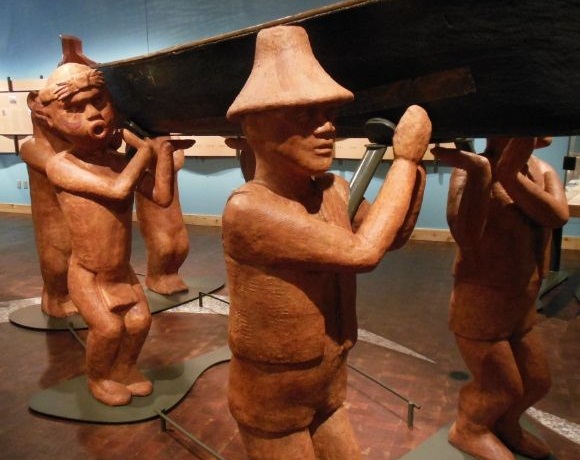 Kolaskin died in 1920 and his religion continued to be practiced on the Colville reservation until 1930.