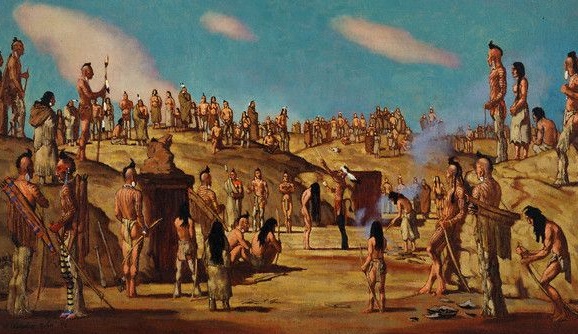 Human sacrifice is generally defined as the ritual killing of a human being as a part of a religious ritual. While human sacrifice was an important part of the ceremonial practices of the Indian nations of Mesoamerica (such as the Aztec and Maya), it was uncommon among the American Indian people of North America. One of the few groups who incorporated human sacrifice into their ceremonies was the Pawnee.

At the time of the European invasion of the Great Plains, the Pawnee were an agricultural people raising corn along the rivers of the Central Plains in what would later become Nebraska. They also engaged in seasonal buffalo hunts, particularly after they obtained the horse. They had a sophisticated understanding of the movement of the stars and celestial observation was important in determining the cultivation cycle of their corn. The Pawnee lifestyle was centered on the astronomical observation. The movements of the stars formed the basis for their seasonal rituals.

In each Pawnee village there was an elite group composed of a hereditary chief, sub-chiefs, religious leaders, and leading warriors which discussed tribal matters such as the timing of ceremonies, assignments of farming plots to families, warfare, and foreign relations.

The Pawnee lived in permanent earth lodges which were constructed so that the four central posts represented the four cardinal directions. The east-facing doorway would have an unobstructed view of the eastern sky and at the vernal equinox the first rays of the sun would strike the altar within the lodge.

One of the important Pawnee ceremonies, the Morning Star Ceremony, involved the sacrifice of a young woman. As a part of the ceremony, a captive woman would be tied spread-eagled to a wooden frame and every man and boy in the camp would shoot an arrow into her body. The young woman represented Evening Star and with her death, her soul went to her husband Morning Star who then clothed her with the colors of the dawn. The reunion of Morning Star and Evening Star meant the renewal of growing things on earth. The Morning Star Ceremony was a fertility rite, and from the Pawnee perspective, the young woman was not a victim, but a messenger.

“I am the man who has power in the east. I am the Great Star (Upirikutsu). You people have forgotten about me. I am watching over your people. Go to the man who knows the ceremony and let him know. He will tell you what to do.”

Following the vision, the warrior would consult with the Morning Star shaman (priest, in some accounts). The warrior and the elder would then determine if Morning Star in the vision was asked for the regular symbolic ceremony or the full ceremony which included the human sacrifice. The elders would consult with the stars: the full ceremony was performed only in years when Mars was the morning star.

On the last day of the ceremony, the men and boys from the village would take the captive outside of the village to a place where they had erected a scaffold. This scaffold represented Evening Star’s garden in the west, the source of all animal and plant life.

The captive would be placed on the scaffold and her clothing removed. When the morning star appeared, two men would approach her from the east and touch her lightly with torches. Four other men would then touch her with war clubs. The warrior who had captured her with then come forward with a sacred bow and shoot her through the heart with a sacred arrow. At the same time, another warrior would strike on the head with the war club from the Morning Star bundle.

The elder supervising the ceremony would then cut open her breast with a stone knife. He would smear his face with her blood. The warrior who had captured her would catch some of her blood on dried meat.

All of the men and boys would then shoot arrows into her body, circle the scaffold four times, and return to the camp.

In 1816, Pawnee leader Petalesharo rescued a Comanche girl from the Morning Star Ceremony, stating that the ritual should be abolished. He offered himself in her place and when the other Pawnee hesitated in killing him, he untied the girl, placed her on a horse, and led her to safety.

Petalsharo, the son of Chief Lachelesharo (Old Knife), was a respected warrior of about 30 years of age at this time. Carl Waldman, in his book Who Was Who in Native American History, writes:

“He won the respect of his people for confronting the powerful class of priests, and, on succeeding his father, he proved influential among many of the Pawnee bands.”

In 1833, the Pawnee prepared to sacrifice a Cheyenne woman captive in their Morning Star Ceremony. Chief Big Ax called a council of chiefs and leading men and asked them to abandon the plan. While the people in the village were hostile to the idea of letting the captive go, they brought the woman to Big Ax’s lodge. The American Indian agent and five others attempted to take the captive from the village. They were blocked by Soldier Chief and the woman was shot with an arrow. The Pawnee warriors then took the dying woman out onto the prairie and carried out the sacrifice.