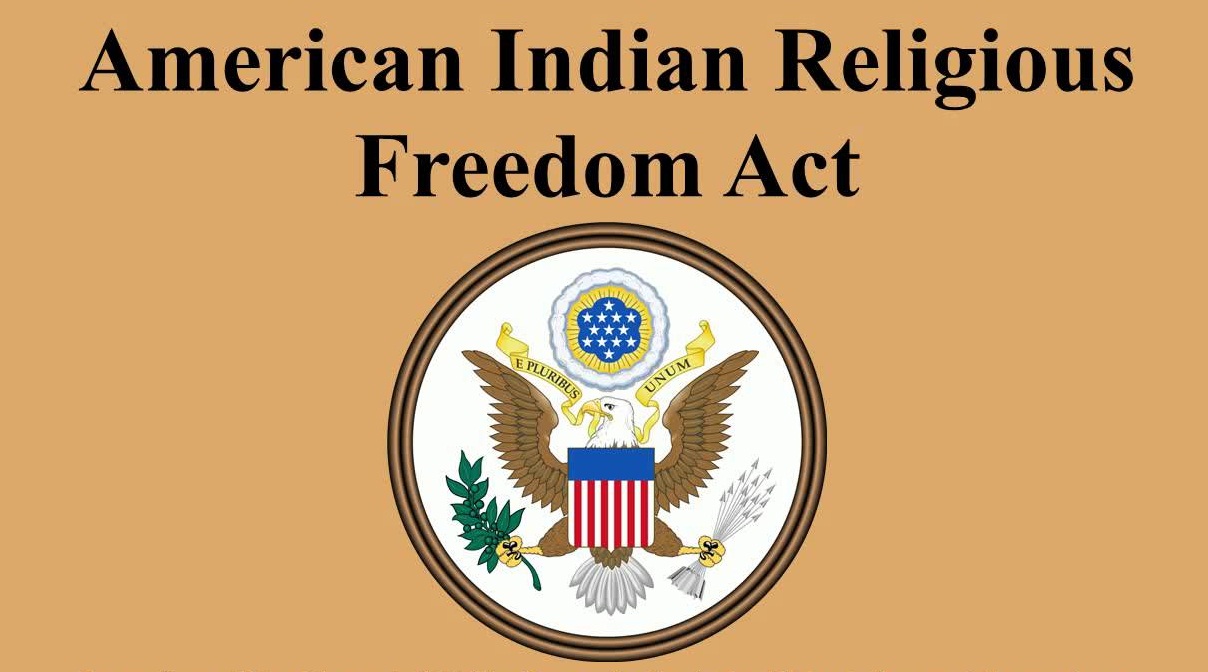 Any careful examination of the religious freedom of American Indians, especially as it pertains to aboriginal religious practices, since the foundation of the United States in 1776 is uncomfortable for those who would like to believe that America has championed religious freedom. American Indian religious freedom has been at best ignored, and more often it has been actively suppressed. As a Christian nation-a concept which has been consistently upheld and supported by the Supreme Court-the United States has been compelled to give Indians the gift of Christianity as a part of its program of forced assimilation. By the 1970s, however, the winds of change began to blow across the political landscape.

One of the first steps in acknowledging American Indian religious freedom came in 1970 when Congress passed HR 471 which gave Blue Lake back to Taos Pueblo in New Mexico. The Blue Lake area, sacred to the people of Taos and used for ceremonies, had been a part of the Carson National Forest since 1906 and thus exclusive Indian use had been restricted. In signing the bill, President Richard Nixon noted the long history of Indian religious use of this site and said:

“We re¬store this place of worship to them for all the years to come.”

Following two decades of complaints by Indian leaders about the abuse of Indian religious and cultural rights, Congress finally passed the American Indian Religious Freedom Act (AIRFA) in 1978. AIRFA was designed to pro¬tect and preserve traditional religious practices, including access to sacred sites, the use and possession of sacred objects, and the freedom to worship through traditional ceremonies. The Act directed federal agencies to survey their rules and regulations and to try to accommodate the practice of Indian religions. AIRFA directed federal agencies to adopt land management policies which would be sensitive to tribal religious needs.

Section 2 of the Act states:

The President shall direct that various Federal departments, agencies, and other instrumentalities responsible for administering relevant laws to evaluate their policies and procedures in consultation with Native traditional religious leaders in order to determine appropriate changes necessary to protect and preserve Native American religious cultural rights and practices. Twelve months after approval of this resolution, the President shall report back to Congress the results of his evaluation, including any changes which were made in administrative policies and procedures, and any recommendations he may have for legislative action.

Under AIRFA, federal agencies were to formally consult with American Indian tribes regarding how proposed federal developments might harm sacred places. However, the law doesn’t provide an administrative mechanism for Indian communities to contest agency decisions on how to treat such places. Thus, grievances must be adjudicated in a court of law, a place which is often hostile toward Indian tribes.  In other words, the Act was purely cosmetic. In the floor debate regarding the bill, Congressman Morris Udall had specifically stated that no major laws were being changed and no disruption of the existing state of affairs would take place.

A year later, the Task Force Report on the American Indian Religious Freedom Act (AIRFA) documented 522 infringements on Indian religious freedom. The report clearly demonstrated the need for AIRFA and the need for administrative changes in federal policy. Some federal agencies appear to be unaware of AIRFA while others engage in only superficial consultation with the tribes, more concerned about notifying the tribes of their decisions than in getting actual input from tribal leaders. The courts continue to rule against Indian religions and religious practices.

While AIRFA called for federal agencies to provide special accommodations for Indian spiritual practices, in 1981 the Forest Service denied a special use permit for Russell Means and other Lakotas which would have allowed them to establish Yellow Thunder Camp in the Black Hills National Forest. While several hundred camps had been established in the area, including many Christian church camps, none of the camps had been established by Indians. In the five years before the application, the Forest Service had received 61 special use applications and approved the 58 applications turned in by non-Indians and had denied the 3 applications by Indians. Ultimately, the Court of Appeals found in favor of the Forest Service.

The major legal challenge to AIRFA came with Lyng versus Northwest Indian Cemetery Protective Association.  In this California case, members of the Yurok, Karok, and Tolowa tribes sought to halt the Forest Service from building a six-mile road near Chimney Rock and from authorizing logging in the surrounding area. These are areas which are important to the traditional religious practices of these tribes. Indian religious informants and the Forest Service’s own anthropologist concluded that the construction of a road through the area would destroy the very core of the religious beliefs. Forest Service anthropologist Dorothea Theodoratus recommended that no road be built in this area. Tribal religious leaders and elders testified that the proposed government road would slice through and devastate the pristine quality of lands and mountain peaks they regarded as sacred. Religious practitioners gathered plants and other natural resources to use in ceremonial activities while other tribal members regularly visited the sacred praying site. In their testimony, the tribal leaders outlined the burden imposed upon their religious freedom in accordance with the provisions of the AIRFA.

While the Forest Service initially argued that building the road would increase timber harvest in the area, stimulate employment, and provide recreational access to the area, the Forest Service during the trial admitted that timber could be harvested without the road, that there would not be any increased employment, and that the economic value of improved access is minimal.

The Supreme Court’s G-O Road Decision opinion written by Justice Sandra Day O’Connor found that Indian Religious rights were outweighed by society’s broader interest in destroying sacred sites for economic reasons, even when such reasons were speculative. The Court found that unless there was specific governmental intent to infringe upon a religion or the government’s actions coerced individuals to act contrary to their spiritual beliefs, then the First Amendment provided no protection for Indian peoples to practice traditional religions even against federal action that potentially could destroy Indian sacred sites.

With regard to any potential protection from AIRFA, the Court determined that because the tribes had not stated a requisite legal burden on those rights that they could not receive protection under the AIRFA.

By the 1990s, the Supreme Court in both Lyng and in Smith v Oregon, had made it clear that AIRFA was meaningless. In 1994, Congress amended the Act. According to the Amended Act:

According to the Amended Act, no federal lands are to be managed in a manner that undermines and frustrates a traditional Native American religion or religious practice.

In 1997, the Supreme Court overturned the Religious Freedom Restoration Act saying that Congress does not have the right to make laws protecting exercise of religion free from government interference.

Justice Denied in the 1870s