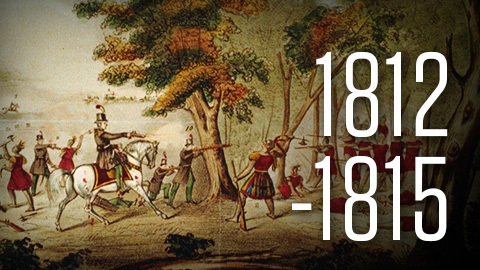 Two hundred years ago, in 1815, the United States Senate ratified the Treaty of Ghent which ended the War of 1812. The treaty restored to all Indian nations all of the possessions, rights, and privileges which they had prior to the war. Robert Venables, in a chapter in American Indians/American Presidents: A History, reports:  “Under the Treaty of Ghent, for example, Andrew Jackson’s 1814 treaty with the Creeks should have been nullified and their ceded lands returned to them. But the Treaty of Ghent was ignored—and continued to be ignored in subsequent treaties with Indian people.”

In Florida, the British withdrew their troops in accordance with the terms of the Treaty of Ghent. However, when it became obvious that the Americans had no intention of honoring article 9 of the Treaty, which specified that the Indians would not lose any land, the British left a large supply of arms and ammunition behind for the Indians to use.

In Missouri, territorial governor and Indian superintendent William Clark announced that the intrusion of non-Indians onto Indian lands would no longer be permitted. He says:  “Our government, founded in justice will effectually extend its protection to the Native inhabitants within its limits.”

Clark also announced that the militia would evict trespassing non-Indians. Echoing Clark, President James Madison denounced intrusions and asserted that  “premature occupancy of the public lands can be viewed only as an invasion of the sovereign rights of the United States.”

Two hundred years ago, the United States, following the Constitution, dealt with Indian tribes as sovereign nations and negotiated treaties with them.

In Nebraska, Hard Heart (Wy-in-wah-hu) and 17 other Iowa chiefs signed a peace treaty with the United States. The treaty: (1) granted mutual forgiveness for acts of hostility and injury, (2) established peace between the Iowa and the United States, (3) returned all prisoners, and (4) stated that all previous treaties and agreements should be recognized.

In St. Louis, Missouri, the Potawatomi and the Piankashaw signed a treaty in which they agreed to give up two tracts of land in Illinois.

In Missouri, the Fox, Kickapoo, and Iowa signed peace treaties with the United States.

In Missouri, William Clark convened the first great Indian council held west of the Mississippi. At Portage des Sioux some 2,000 representatives met for several weeks of treaty-making. With the end of the War of 1812, the purpose of the council was to put an end to hostilities with all Indians with whom the United States might be at war. Landon Jones describes the scene:  “The U.S. regulars had lined up their one hundred tents in precise rows on the prairie. Surrounding them was a hodgepodge of dwellings and canoes of the Native Americans, each reflecting their distinct tribal traditions.”

Clark began by addressing each of the tribes separately. He stressed that the United States wished to bury the tomahawk and forget past transgressions. The Shawnee, Delaware, Sioux, and Omaha, applauded his words.

None of the major Sauk chiefs, such as Keokuk and Black Hawk, attended the council.

The Sioux chief Black Buffalo suddenly died at the council. The American soldiers gave him a full military funeral and thus eased the apprehensions that his death might be a bad omen.  Omaha chief Big Elk delivered the eulogy:  “Death will come, and always comes out of season. It is the command of the Great Spirit, and all nations and people must obey.”

In Missouri, Western Cherokee leader Tahlonteskee met with Governor William Clark. The Cherokee asked for help in stopping the conflict with the Osage. They asked for U.S. troops to provide protection from both the Osage and from non-Indian settlers. Of particular concern to the Cherokee were the Osage under the leadership of Clermont.

In Michigan, the Americans held a council with the Shawnee, Wyandot, Seneca, and Delaware. The Shawnee prophet Tenskwatawa, who was living in exile in Canada, attended and promised that his people wished to be at peace with the Americans. The Americans, however, were determined to destroy any influence which Tenskwatawa might have. They insisted that if he were to come back to the United States, he would not be allowed to establish a separate village, but would be required to live in the village of his old rival, Black Hoof. Angry, Tenskwatawa left the conference and returned to Canada.

In Illinois, Kickapoo warrior Kennekuk had a vision in which the Great Spirit spoke to him. He began to preach a message of pacifism and accommodation with the Americans. He was ostracized by the Kickapoo and went into exile, establishing a village on the Vermillion River. About 250 Kickapoo joined him at his new village.

In California, the Franciscans at the Santa Cruz mission began recruiting Yokut from the San Joaquín Valley.

In California, the Catholic priest at La Purísima Concepción ordered Timiyaquat, a Chumash tomol (canoe) captain, to take 30 tomols to San Miguel Island and remove all of the Indians from the Island. The tomols, however, were met by a raging storm and all but three were lost.

Emissaries from the Onondaga Nation, one of the Six Nations of the Iroquois Confederacy, asked the Seneca prophet Handsome Lake to bring his message to their people. Shortly after this, Handsome Lake had a vision in which he was advised by three messengers that it was his duty to go to the Onondaga, but that he would meet four messengers who would lead him on the Sky Trail. The Seneca begged him not to go, but he set out for the Onondaga Nation anyway. Near Syracuse, New York, he became very ill and weak. Following his vision, he died.

In Oregon, the North West Company decided to send trapping parties south to California and east toward the Rockies. They established Fort Nez Perce where the Walla Walla River joins the Columbia River as the hub of this operation.

In Oklahoma, a group of American traders made a settlement on Pecan Point on the Red River. The Caddo complained to their Indian agent about this unauthorized intrusion on their lands. The location of the settlement interfered with buffalo attempting to cross the river.

Several hundred Shawnee and Delaware left the United States and moved to Texas where they were welcomed by the Spanish as a barrier against the Americans. This group became known as the Absentee Shawnee.

In Missouri, the Shawnee who were living in the Cape Girardeau area complained to Governor William Clark that the American settlers were stealing their horses.

In Lincoln County, Missouri, fifty Sauk warriors under the leadership of Black Hawk killed four American rangers. The Americans counterattacked and the warriors barricaded themselves in a sinkhole. Here they successfully defended themselves.