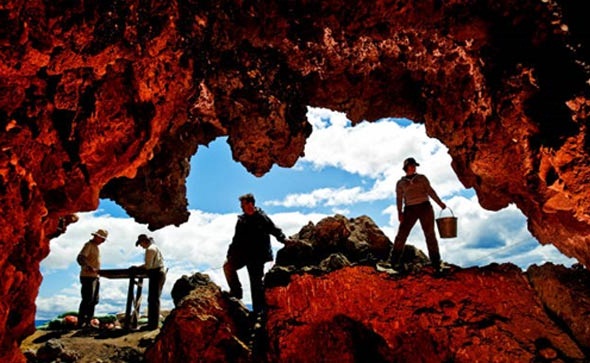 The earliest period of human occupation in what is now Oregon is called the Paisley Period by archaeologists. The period, which is tentatively dated from about 15,700 years ago to 12,900 years ago, is named after the Paisley 5 Mile Point Caves site (35LK3400) near Summer Lake.

The Paisley Caves are located in the Summer Lake basin in south-central Oregon on the highest shoreline of pluvial Lake Chewaucan. The initial archaeology at the site was carried out during 1938 and 1940 by Luther Cressman and his students. In Cave 3, Cressman and his students found a U-shaped living area which had been cleared of stones and outlined with boulders which lay well below a layer of volcanic ash from Mount Mazama (the eruption which created Crater Lake). The Mount Mazama eruption would later be dated to 7,600 years ago.

At the time Cressman was working at Paisley Caves there were no precise chronometric methods for dating archaeological sites. One of the major advances in chronometric dating came with the development of radiocarbon dating. This dating method was developed in 1949 by Chicago chemist Willard Libby as a result of the Manhattan Project (i.e. the development of the atomic bomb during World War II). It is based on the principle that radioactive carbon in the atmosphere is absorbed by all living things. At death this absorption stops and a steady decay of carbon begins. Since the half-life of the radioactive carbon is known (5,568 years), measuring the amount of carbon remaining can determine the age of the material.

In Cave 3, Cressman and his students found the bones of Pleistocene camel, horse, bison, and waterfowl. While Cressman felt that these remains were associated with the human occupation of the site—that is, they had been killed and eaten by these early Indians—many archaeologists at the time were more than a little skeptical, feeling that human occupation of the Americas could not be this ancient.

From 2002 through 2010, new archaeological excavations were conducted at the Paisley Caves by the University of Oregon’s Northern Great Basin archaeological field school. As in the earlier study, the archaeologists found the bones of now-extinct Pleistocene camel and horse and were able to establish a direct link between these remains and the human occupation of the site. The cut marks on the bones of these ancient animals showed that they had been butchered by the Indian occupants of the site.

One of the features found in Cave 5 was a small pit containing camel, horse, mountain sheep, waterfowl, and fish bones. Called the “Bone Pit” by the archaeologists, the pit was covered by a stone slab. A second stone slab stood on end at the southern rim of the pit. Bones can be radiocarbon dated and the bones from inside the pit and near the pit returned dates ranging from 16,190 years ago to 13,030 years ago.

Also present in the cave were coprolites (dried feces). The coprolites were identified as human by DNA analysis and radiocarbon dated to 14,500 years ago. In the news report on this discovery, Tamara Stewart wrote in American Archaeology:   “Rather than the traditional view that first Americans entered the New World via the Bering Strait, these new findings suggest it is more likely that people came down the coast by boat or that they were south of the corridor before the Last Glacial Maximum closed the route.”

DNA from the coprolites shows that the occupants of the cave were Native Americans with close genetic ties to Siberian and Asian populations. Coprolites also provide direct evidence of prehistoric diets. One of the coprolites also gave chemical evidence that meat from bison, fox, and sage grouse had been consumed.

The stone tools at the site belong to the Western Stemmed Tradition. Obsidian hydration dating on some of the tools shows that they were made between 13,500 and 16,500 years ago. A protein residue analysis on a polished hand stone found near the “Bone Pit” showed that it had been used to process horse meat. In other words, this stone tool had been used for pounding or grinding dried horsemeat or had been used to crack open horse bones to extract the marrow.

In addition to stone tools, the site also contained bone tools, including a bear bone with saw-like teeth which was dated to 14,230 years ago.

In their book Oregon Archaeology, Melvin Aikens, Thomas Connolly, and Dennis Jenkins sum up the archaeological finds at the Paisley Caves:  “While one could wish there were more artifacts from the deepest and oldest deposits, it is abundantly clear that occupations at the Paisley Caves were always very brief, leaving behind only thin scatters of stone, bone, and fecal matter, of which little survived the depredations of illegal artifact mining to be recovered by archaeologists.”

With regard to the importance of the Paisley Caves site, Melvin Aikens, Thomas Connolly, and Dennis Jenkins write:  “In sum, the Paisley Caves site is extremely important because it is the first place in the New World that incontrovertible human traces—including human DNA in dried feces on the one hand, and obvious stone and bone artifacts on the other—have been directly dated in excess of 14,000 years ago.”