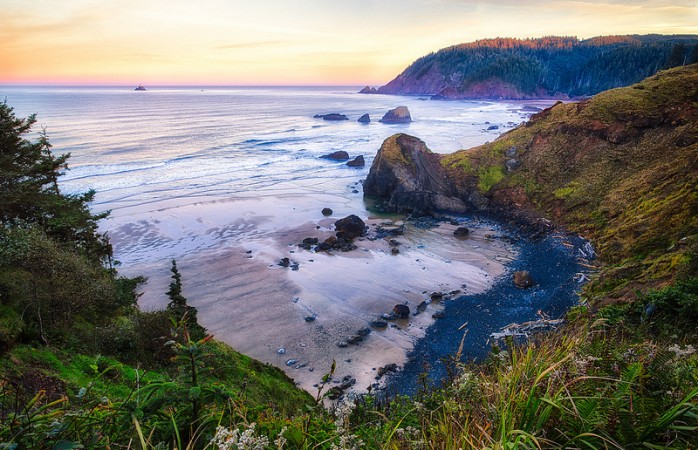 The Oregon coast is a part of the larger Northwest Coast culture area which stretches from the Tlingit homelands in Alaska to the Tolowa homelands in northern California. The cultures along this coastal ecotone (an area between two biomes) share a number of common features, including a subsistence pattern which is centered on sea and littoral (shore, estuary, and headlands) environments. In the northern portion of this culture area (the Alaska Panhandle and British Columbia), the coastline is highly convoluted with many offshore islands and is bordered with steep, high mountains. The coasts of Washington, Oregon, and Northern California, on the other hand are relatively straight which means they are unprotected and pummeled by unimpeded ocean waves.

One of the current hypotheses for the peopling of the Americas, known as the Coastal Migration Hypothesis, envisions early migrations to the Americas by coastal travelers using boats. It is well known that ancient people have been using boats of some kind for a long time. Ruth Kirk and Richard Daugherty, in their book Archaeology in Washington, write:  “Sea voyages date far back into antiquity. People reached Australia from Indonesia more than 40,000 years ago, and Japanese archaeologists have found obsidian brought to Honshu nearly 35,000 years ago from a small island 20 miles distant.”

The Coastal Migration Hypothesis suggests that archaeologists should expect to find the earliest evidence of the settlement of what is now Oregon along the Pacific coast. Unfortunately, there is little archaeological data along the Oregon coast to substantiate this hypothesis.

Archaeological surveys of early sites along the Oregon coast have yielded very little data regarding human habitation in this area prior to 4,000 years ago. Coastal sites tend to be rare because of two factors of physical geography. First, and perhaps most important, is the fact that sea levels have been rising, particularly over the past 18,000 years. During the last ice age when humans would have been first entering the area, the sea levels were 100 meters (330 feet) lower than they are today. Along the Oregon coast, this means that vast stretches of the continental shelf would have been exposed and the actual coast line would have been several kilometers to the west of its current positions. The camp sites and villages used by the early people are thus underwater today.

A second factor is the nature of the Oregon coast line. It is constantly changing due to the impact of tides and high-energy waves, tectonic uplift, erosion, and landslides. In other words, even more recent evidence of human use is being destroyed by natural forces.

While early archaeological sites are rare on the Oregon coast, data from the north and from the south strongly suggests that this area must have been inhabited. To the north, people were using On-Your-Knees Cave (49PET408) on the northern tip of Prince of Wales Island by about 12,000 years ago. The people were engaged in a coastal marine subsistence pattern which includes fishing and the gathering of shellfish. It is also clear that they were using watercraft and were engaged in long-distance trade.

The human remains in On-Your-Knees Cave have DNA which belongs to the D4h3 haplogroup. Members this haplogroup are found exclusively on the Pacific Coast from Alaska to Chile.

About the same time people were occupying the coastal areas of Alaska and British Columbia, they were also using Daisy Cave in California’s Channel Islands. One again, the archaeological data shows a pattern of using marine resources and knowledge of watercraft.

At the Indian Sands site (35CU67), there was a scatter of chipped stone artifacts and some burned and broken mussel shells which dated to 12,300 to 8,600 years ago.

At the Neptune State Park site (35LA3) there are a few lithic flakes which were dated to about 9,330 years ago.

The Tahkenitch Landing site (35DO130) has a few stone stools that date to 8,900 to 7,600 years ago. At this time Tahkenitch Lake was an estuary open to the ocean.

Archaeologists Melvin Aikens, Thomas Connolly, and Dennis Jenkins, in their book Oregon Archaeology, summarize the early occupation of the Oregon coast this way:  “The early Holocene culture record to the Oregon coast remains impoverished, and while we can anticipate occasional new evidence of great age, the reality is that the early record will never be robust, given the geological history of Oregon’s Pacific coast.”