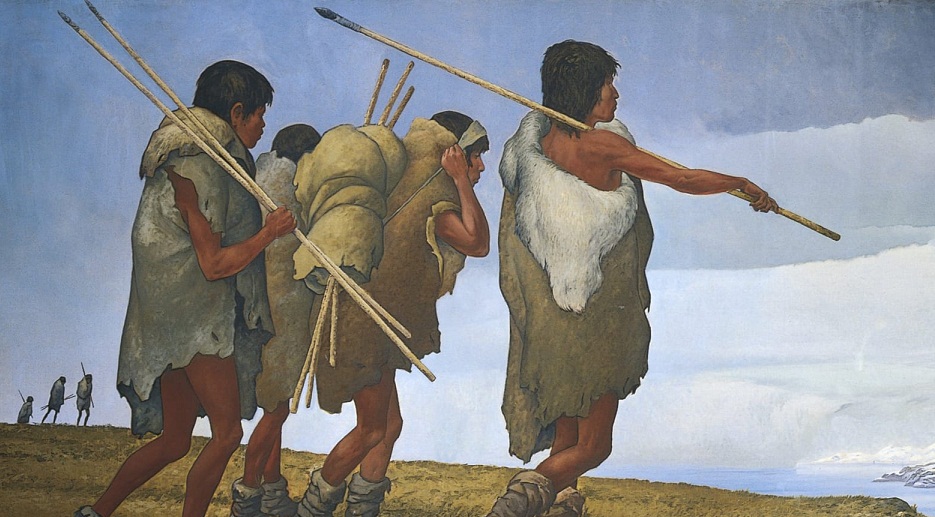 About 12,900 years ago there was an abrupt change in climatic conditions known as the Younger Dryas which marked the beginning of cooler conditions in the Great Basin area of present-day Oregon. This climatic change marks the beginning of what archaeologists call the Fort Rock Period which dates from 12,900 years ago to 9,000 years ago. During this time, the American Indians in this region focused their economic activities on the natural resources (plants and animals) found in and around shallow wetland settings.

In their book Oregon Archaeology, Melvin Aikens, Thomas Connolly, and Dennis Jenkins report:  “The period from about 12,900 to 9,000 years ago was one of continued slow drying during which localized shallow-water lakes and marshes with fringing grasslands replaced the previously vast and deep pluvial lakes of the Pleistocene era.”

During this period, human population increased, but remained thinly distributed across the landscape for most of the year. The large game that was utilized by the people included deer, mountain sheep, antelope, and bison. According to Melvin Aikens, Thomas Connolly, and Dennis Jenkins:  “People followed seasonal rounds that took them to many varied locations, sometimes covering long distances, as shown by the common occurrence at archaeological sites of obsidian artifacts made of stone from distant sources.”

During the winter, the people tended to live in caves and rockshelters near lakes and marshes. In the summer, the people would migrate to higher elevations where they would hunt large game and collect nuts, roots, and berries.

Fort Rock Cave (35LK1) is located on a low volcanic ridge about 1.5 miles west of Fort Rock State Park. The cave, which faces southwest, is about 20 meters deep and 10 meters wide. This site was first excavated by Luther Cressman and a University of Oregon crew in 1938. Below a layer of volcanic ash from the eruption of Mount Mazama, they found sagebrush bark sandals. The sandals were later radiocarbon dated to 10,500 to 9,300 years ago. Melvin Aikens, Thomas Connolly, and Dennis Jenkins report:  “After his excavations artifact collectors relentlessly mined the cave, removing an undetermined number of additional sandals and no doubt other materials.”

Later excavations also found a mano which was associated with the preparation of pine and grass seeds for food.

The Connley Caves site (35LK50) is located about 10 miles south of Fort Rock. The site is composed of eight rockshelters. The site is located near Paulina Marsh and archaeologists working at this site uncovered large quantities of waterfowl bones which were dated to 13,000 to 9,000 years ago. The pine trees which were in this area during this time were Pinus edulis or Pinus monophylla.

During the Fort Rock Period, the Connley Caves were occupied primarily during the winter. The site provided good access to both marsh resources (waterfowl, fish, cattail, bulrush) and to the resources in the wooded hills surrounding the caves (bison, elk, deer, grouse).

Cougar Mountain Cave site (35LK55) was totally excavated in 1958 by John Cowles, an avid artifact collector. While a great many artifacts were uncovered, there is a lack of precisely recorded information on artifact associations and a lack of radiocarbon dates. However, the artifacts are similar to those found at Fort Rock Cave and Connley Caves. The artifacts include stone tools (knives, scrapers, abraders, drills, pipes), bone tools (needles, awls, beads), wooden artifacts, basketry, and sandals. One of the tule sandals was radiocarbon dated to 9530 years ago. Melvin Aikens, Thomas Connolly, and Dennis Jenkins report:  “Sagebrush bark sandals were fairly common and frequently muddy, which may indicate wintertime occupation.”

The Paulina Lake site (35DS34) is located about 25 miles northwest of Fort Rock in the Newberry Volcano National Monument. The site is on the boundary between the Great Basin and Plateau culture areas. One of the interesting features of this site is a storage pit which was about one meter in diameter and about 45 centimeters deep. Grass pollen suggests that this pit was probably grass-lined. Pollen also showed the presence of mock oranges (Philadelphus) and willow weed (Onagraceae).

Kenneth Ames, Don Dumond, Jerry Galm, and Rick Minor, writing on the prehistory of the Southern Plateau in the Handbook of North American Indians, report:  “The site also produced a well-defined structure, either a wickiup or windbreak, with a series of radiocarbon dates averaging to 9500 B.C. This is the earliest structure anywhere in the Plateau culture area.”

During the period from about 10,500 to 8,500 years ago, the site appears to have been used as a summer base camp. Here Indian people processed a broad range of plants and animals. The archaeological data suggests that the people stayed at this site for a good portion of the summer. The data suggests that the population was fairly stable, using the Paulina Lake site during the summer and then using the Fort Rock and Connely Cave sites during the winter.

Near the east end of the Fort Rock Basin, on Buffalo Flat are four sites (35LK1180, 35LK1881, 35LK2076, 35LK2095) collectively known as the Buffalo Flats Bunny Pits. The pits are hearths or earth ovens which range from as small as two feet in diameter to as large as 8 to 10 feet across. Most of the identifiable animal bones (98%) found at the sites are jackrabbit. The rabbits were probably collected in large drives, such as those described in the ethnographic literature, then processed and cooked. The sites date to 11,500 to 8,900 years ago.

The Dirty Shame Rockshelter site (35ML65) is in southeastern Oregon on Antelope Creek. Occupation of this site began during the Fort Rock period and was a summer-fall based camp. Among the items uncovered by archaeologists were 10 sandals and sandal fragments, matting, cordage, net fragments, small pressure flakes, a lanceolate projectile point, and a flat rock that served as an anvil. The site has been dated to 10,710 years ago.