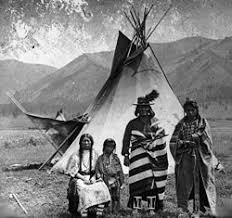 The Kootenai (also spelled Kutenai), whose aboriginal homelands straddled the Rocky Mountains and included parts of Western Montana, Idaho, British Columbia, and Alberta, have a unique language and culture. Kootenai is one of a handful of languages in the world which is considered a language isolate: it is not related to any other language. With regard to phonology, Kootenai, unlike most other North American Indian languages, uses pitch. Thus, a rising or falling pitch can change the meaning of a word.

The Kootenai appear to have once lived on the Great Plains east of the Rocky Mountains and then migrated into the Plateau Culture Area. In his Ethnography of the Kutenai, H.H. Turney-High writes:  “There is a strong tradition even at Bonner’s Ferry that the whole body of the Kutenai originated on the Great Plains and at some, to them, very ancient time gradually moved westward.”

Within the Plateau Culture area, the Tobacco Plains area of Montana is the original Kootenai homeland. Once they had a great village in this area and their oral tradition speaks of the Tobacco Plains area as where they “woke up.” One group eventually split off from the Tobacco Plains village and established a village in Fernie, British Columbia. Another band later broke up and settled in the area of Libby, Montana. From the Libby band came the people who settled around Flathead Lake in the Somers, Elmo, Dayton area. According to H.H. Turney-High:  “As soon as peace was made between the Kutenai, Flathead, and Kalispel, the bulk of the Jennings-Libby people moved to Flathead Lake and are the People-of-the-Bay today.”

According to oral tradition, there was a time when one of the Kootenai bands continued to live east of the Rocky Mountains, perhaps in the area of McLeod, Alberta, and were a Plains tribe. However, they suffered an epidemic which reduced their numbers. Knowing that they could not continue to survive on the Plains with their reduced numbers, they migrated across the mountains to join their western cousins. They settled in the southern portion of the Kootenai hunting range where they mingled with Salish-speaking people. According to H.H. Turney-High:  “They are today entirely extinct save for those mixed bloods who claim tunáxa ancestry.”

Among the Kootenai, the healers were primarily women who knew the healing powers of the plants and who had had dreams or visions about healing. A long time ago, the spirits told the Kootenai women that they were to form the Crazy Owl Society in order to fight off epidemics. Ethnographer H.H. Turney-High points out:  “Epidemics were considered the result of disobeying the spirits, and the Crazy Owls were supposed to prevent such consequences.”

The spirits would visit one of the powerful women and she would then begin to sing as directed by the spirit. The other women of the Crazy Owl Society would then join her and follow her as she encircled the lodges. When all of the lodges in the camp had been treated, the leader would lead the group to a tree and strike it. When the proper number of trees had been struck, they would run to the west. Ethnographer H.H. Turney-High reports:  “Soon they would leave the ground and run in the air, with the exception of the file-closer, who ran after them on the ground. Eventually they all came to ground, held a council, and adjourned.”

The Kootenai Shamans’ Society was formed by all of the shamans or medicine people who banded together for mutual assistance and joint public service. The oldest and most respected shaman acted as the formal leader of the group.

This is a Kootenai dance which is similar to the Shaking Tent ceremonies found among the Plains Algonquians. According to anthropologist Bill Brunton, in his chapter on the Kootenai in the Handbook of North American Indians:  “It was essentially a ceremonial meeting with various spirits in order to seek assistance from them.”

The spirits often speak in an archaic form of Kootenai and therefore someone must translate for them. The ceremony deals with finding lost articles, healing, and seeing the future. One of the important spirits in this ceremony is the Owl.

The Kootenai Sun Dance focused on success in hunting. On the last day of the dance, the Sun Dance Chief was given lavish gifts, including horses and food. These were then redistributed to those in need.

Among the Kootenai, the Sun Dance was held in response to a vision. The vision would indicate the location of the ceremony as well as its timing.

In the Kootenai Sun Dance, members of the Crazy Dog Society are instructed to cut 30 lodge poles, twice as long as regular lodge poles, for the ceremony. In cutting down the Sun Dance center pole, both men and women are involved. When this tree falls, it must not touch the ground, but has to fall upon the shoulders of those who have pledged to dance.

Archaeologist Roger Tro, in his University of Montana M.A. Thesis writes:  “Another effect of the Sun Dance, and perhaps the most significant, was that it helped in maintaining a tribal bond between the Upper and Lower Kutenai. This was the only occasion during which these two divisions were consistently together and may easily have been a primary factor in maintaining tribal identity.”

This was a Kootenai ceremony which was held only at times of great stress and crises. Musicologist Loran Olsen, in an article in Idaho’s Yesterdays, writes:  “Whenever the people faced famine a Fir Tree Dance was held to bring game back to the region.”

Among the Kootenai, the corpse was wrapped in a robe and quickly taken to be buried by two people. Burial was usually in a talus slope. There was no ceremony or feast associated with burial. As a sign of mourning, spouses would cut their hair. If the deceased were a man who had died at home, the lodge poles, fir bough flooring, and tent pegs would be destroyed. If the deceased were a woman who had died at home, then the lodge covering would be destroyed.