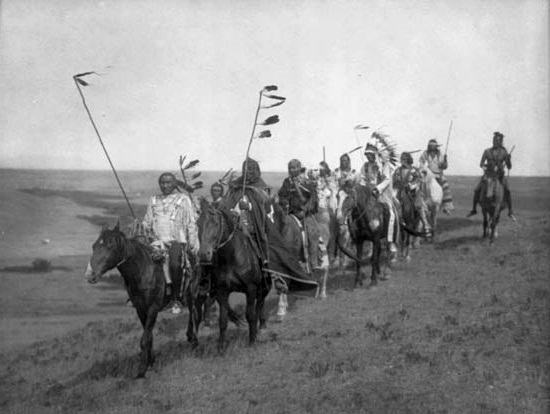 At the time the first European explorers and fur traders were entering the Northern Plains in the late eighteenth and early nineteenth century, the Indian tribe known as the Gros Ventre (Atsina) were living in the Milk River drainage of Missouri River in what is now Montana. Like the other Northern Plains tribes of Montana and Alberta they had developed a lifeway which involved hunting buffalo.

The designation “Gros Ventre” is, of course, French and was given to them by the early French fur traders. Gros Ventre means “big belly” and comes from the Plains Indian sign language in which the sign for the group indicated that they were big eaters. The name they use for themselves would translate as White Clay People. Many of the early English-speaking explorers and fur traders called them Falls Indians or Waterfall Indians. The Blackfoot called them Atsina and this designation has often been used by ethnographers and others.

Prior to the early 1700s, the ancestors of the Gros Ventre were living in the woodlands near the Great Lakes. In the early 1700s they were pushed out onto the Great Plains by the expansion of the tribes involved in the fur trade. On the Plains, they split into two groups with the northern group becoming the Gros Ventre and the southern group becoming the Arapaho.

The Northern Plains tribes depended on hunting and gathering for their subsistence. The most important game animal on the Northern Plains was the buffalo and for most of the tribes this animal was considered the staff of life. Buffalo hunting was generally a communal effort and individuals were not permitted to hunt buffalo alone. A lone hunter could startle the herd and as a result little meat could be taken. Writing about the Gros Ventre, Minette Johnson, in her thesis Return of the Native: Buffalo Restoration at the Fort Belknap Reservation, reports:  “The bow and arrow remained the weapons of choice because they could be shot accurately at high speeds and be reloaded easily. The hunters aimed their arrows behind the last rib-bone of the buffalo, so it would penetrate the lungs, killing even the largest of the bulls.”

During the nineteenth century, the Gros Ventre had 10-12 bands. The names and composition of these bands changed frequently. The band leaders had a great deal of influence in decisions regarding the movements of the band, but they did not have any directive authority.

Among the Gros Ventre, bands were exogamous, meaning that people generally married someone from a different band. After marriage, the couple would generally live with the husband’s band unless the wife’s family was more prosperous.

One of the interesting features of Gros Ventre social organization in the nineteenth century was the age-graded societies. For the men, this meant that during the course of their lives they moved through a series of societies or lodges which were composed of men of the same age group. The age-graded societies were central to the organization of Gros Ventre society. A young man would join the first ceremonial lodge by making a vow to the Great Mystery and then taking a pipe to an older man. If the older man accepted the pipe, he was then the younger man’s ceremonial grandfather and was responsible for instructing and assisting the young man.

The Gros Ventre had six age-grades: Fly Lodge, Crazy Lodge, Kit-Fox Lodge, Dog Lodge, Drum Lodge, and Old Man’s Lodge. Each of the age-grades was composed of a group of peers who moved through the grades as they aged. According to anthropologist Loretta Fowler in her book Shared Symbols, Contested Meanings: Gros Ventre Culture and History, 1778-1984:  “Members of an age set had a moral obligation to help and encourage one another in battle, disputes, and participation in lodge ceremonies.”

Gros Ventre men would seek power through the vision quest. Loretta Fowler and Regina Flannery, writing in the Handbook of North American Indians, report:  “A man seeking power fasted alone, concentrating his thought and making offerings for one or more days on top of a promontory.”

While many attempted to obtain power in this way, relatively few were successful. According to Fowler and Flannery:  “Gros Ventres thought such power was inherently dangerous and necessitated too many restrictions; parents discouraged children from seeking it, urging other methods of prayer-sacrifice to attain fame and fortune.”

The Gros Ventre have two tribal medicine bundles which are symbols of creation and of their place in the universe. According to anthropologist Loretta Fowler:  “They represented the Gros Ventres’ special relationship with the Supreme Being or Great Mystery Above, a relationship that was the basis for health and happiness.”

The oldest of these bundles is the Flat Pipe which was given to them when the world was created. The ceremonies which were associated with this bundle – traditionally three seasonal ceremonies – provided the Gros Ventre with help for hunting and for obtaining horses. They also provided help in battle and in obtaining wealth.

The Gros Ventres’ Feathered Pipe bundle also represented their special relationship with the Great Mystery Above. The ceremonies associated with this bundle helped them to be successful in their life. The keeper of the Feathered Pipe had some power of weather control as well as the power to protect the people from illness.

Each of the Gros Ventre bundles had its own keeper – a man who was responsible for caring for the bundle and for carrying out the ceremonies associated with it. According to Loretta Fowler:  “The keepers prophesied, cured, and obtained supernatural aid for the Gros Ventres in making war, hunting, and obtaining horses.”

People would vow to cover the pipe – that is, to make a number of offerings to the bundle. When enough offerings had accumulated, the keeper would conduct a sweat lodge ceremony, smudge the offerings, and then take some of them to a sacred place on a mountain or butte. Some of the offerings would be given to those in need.

The importance of the two Gros Ventre pipe bundles is expressed by anthropologist Loretta Fowler (1986: 122):  “Their sacred responsibility for the pipes, in the Gros Ventres’ view, makes them unique among peoples.”  One Gros Ventre elder says:  “Only a Gros Ventre can do pipe ceremonies because they are Gros Ventre ceremonies.”

One of the ceremonies that is found among most of the Plains tribes is the Sun Dance. Speaking more than a century ago, Gros Ventre Chief Running Fisher said of the Sun Dance:   “The sun dance is a custom among the Indians which seeks to elevate a spirit of honor among men as well as women.”

Among the Gros Ventre men did not traditionally take part in the ceremony until they had received recognition as a warrior. According to Running Fisher:  “The men emulate the deeds of their fathers in order that they may take part in the sun dance. And thus this wonderful dance becomes a school for patriotism among the tribes and a stimulus to deeds of valour as well as an incentive to virtue.”

Another traditional Gros Ventre ceremony was the Grass Dance which served as an expression of cultural identity. The high point of the ceremony was the dog ritual. Eight men – two men who were authorized to wear crow belts, the spear (fork) keeper, the spoon keeper, two whip men, and the two assistants to the whip men – danced around a kettle containing cooked puppy. After the dog meat was eaten, there were a series of special dances and the warriors recounted their exploits. At times, the whistle keeper would call for a punishing song in which the dancers would dance to the point of exhaustion.

With regard to sacred areas, the Little Rockies is a mountain area on the southern border of the Fort Belknap Reservation. The Little Rockies are the spiritual center of the Gros Ventre. While this is an important area for vision quests and other ceremonies, the off-reservation portion of the mountains has been impacted by a gold mine.