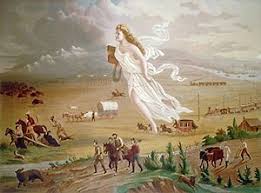 In 1802, President Thomas Jefferson obtained a copy of the book written by Sir Alexander MacKenzie who had crossed Canada to the Pacific Ocean on behalf of the North West Company. Jefferson and his secretary, Meriwether Lewis, were inspired by the book and felt that an American expedition should cross the continent to the Pacific Ocean. Anthropologist Raymond Wood, in his book Prologue to Lewis and Clark: The Mackay and Evans Expedition, writes:

“Perhaps no one read the book more intently than that nation’s recently elected president, Thomas Jefferson, for the volume contained nothing less than a blueprint for the British acquisition of western North America and its commerce, a coup that would deny its riches to the ever expanding Republic.”

“After reading the book, Thomas Jefferson took actions leading directly to the Lewis and Clark expedition.”

With regard to the inhabitants of the Louisiana Territory, Article III of the treaty between the United States and France says:

“they shall be maintained and protected in the free enjoyment of their liberty, property, and the religion which they profess.”

In 1804, official ceremonies were held at St. Louis transferring Louisiana to the jurisdiction of the United States. Historian Landon Jones, in his book William Clark and the Shaping of the West, notes:

“The most prominent absentees at the Three Flags Ceremony were the Indians who actually controlled the lands being transferred.”

“Four thousand people lived in the single agricultural complex at the Mandan-Hidatsa villages, more than in the American capital of Washington City.”

The Otoe (also spelled Oto) and Missouria were Siouan-speaking peoples who were closely related to the Winnebago and Iowa. The Otoe and Missouria had been a single nation until two chiefs quarreled and divided them into two distinct nations.

Near present-day Fort Calhoun, Nebraska, Meriwether Lewis held a council with the Otoe-Missouria. While six chiefs were present, the two principal chiefs – Little Thief and Big Horse – were not in attendance. The Indians were promised a dependable fur trade and Lewis stressed that the Indians would be destroyed if they did not acknowledge the power of the United States.

Meriwether Lewis and William Clark scheduled another meeting with the Otoe-Missouria, this time with the Omaha invited so that they could mend a rift between the two groups. However, the party found the Omaha village deserted and in ruins.

After passing the deserted Omaha village, a party of Otoe-Missouria, including Little Thief and Big Horse, rode into Lewis and Clark’s camp. Lewis held council with them and explained that they were now a part of the United States. There is no report on the chiefs’ reactions to this news.

The designation Sioux has been applied to a number of related, but autonomous, Plains Indian groups. Since they had reputations as fierce warriors, many depravations against non-Indians were blamed on them. For example, when one of the Americans with the Corps of Discovery, John Colter, reported that his horse had been stolen, it was presumed that the nearby band of Sioux had been the culprits.

Near the present-day site of Pierre, South Dakota, Meriwether Lewis and William Clark encountered the Sioux and attempted to hold council with them. They had some language difficulties since none of their interpreters were fluent in the language. In some instances there was confusion and the threat of violence. According to James Ronda:

“The Partisan and his retinue proved the most aggressive, at one point causing the usually unflappable Clark to draw his sword.”

Lewis designated Black Buffalo as the leading chief. Black Buffalo was given a medal, a military coat, and a cocked hat. Two other chiefs, Partisan and Buffalo Medicine, were given medals. The Indian response to the gifts is described by historian Stephen Ambrose in his book Undaunted Courage: Meriwether Lewis, Thomas Jefferson, and the Opening of the American West:

“‘That’s all?’ the Tetons demanded, unbelieving. Some worthless medals and a silly hat.”

The gift-giving was two-way as historian James Ronda reports:

“And the captains received a gift that did not translate well across the cultural divide—bedmates, a mark of respect accorded to distinguished guests.”

The Arikara (sometimes known as the Ree) were village people and farmers who lived along the Missouri River. They were a Caddo-speaking group closely related to the Pawnee. While they did hunt buffalo, they were not a nomadic hunting people.

Meriwether Lewis and William Clark held council with the Arikara in South Dakota. Believing that every Indian nation had to have only one leader, they designated Crow at Rest as the principal chief, and Hawk Feather and Chief Hay as secondary chiefs. Hawk Feather and Chief Hay boycotted the second day of the council, insulted at not having been considered as primary chiefs. Both were village chiefs, as was Crow at Rest.

The Osage were a Siouan-speaking group who had been one people with the Kaw, Omaha, Ponca, and Quapaw. Their territory in 1804 was along the Osage River in what is now Missouri. They were semi-nomadic and maintained farming villages.

In Washington, D.C, an Osage delegation under the leadership of White Hair arrived for talks with the Americans. The delegation was the first in a series of Indian visits to the Capital arranged by Meriwether Lewis. White Hair urged President Thomas Jefferson to abandon his plans for expansion west of the Mississippi, saying that it would upset both his people and the Spanish.