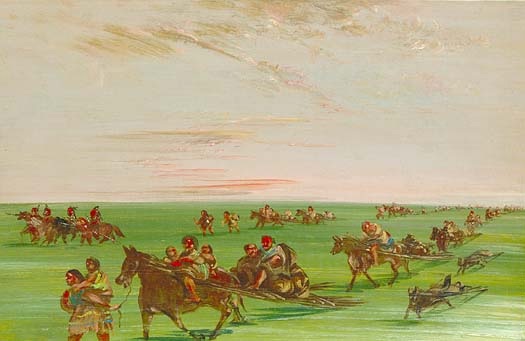 When the Europeans began their invasion of the Americas, they found that the Native Americans, like people throughout the world, had domesticated dogs. At the time of first contact, American Indians had at least 17 different types of dogs.

The Northwest Coast culture area, which is generally described as the area along the Pacific Coast north of California and between the Cascade Mountains and the ocean, is the home to many Indian nations who traditionally based their economy on the use of sea coast and river ecological resources. This is an area which stretches from the Tlingit homelands in Alaska to the Tolowa homelands in northern California.

Among the Northwest Coast First Nations, dogs were often kept as pets and dogs were never eaten. Several of the tribes used dogs in hunting mountain goats and deer. The dogs were used to drive the animals to the hunters and/or into the water where they could easily be taken.

With regard to Salish dogs, Reg Ashwell and David Hancock, in their book Coast Salish: Their Art and Culture, report:

“They were highly trained by their masters, who called them by name, treated them like respected members of the family, and according to tales old Indians tell, even sang to them.”

Among the Tlingit, dogs were used for hunting bear, elk, goat, and river otters. The dogs also carried packs. In A History of Dogs in the Early Americas, Marion Schwartz reports:

“The typical Tlingit dog was shepherd sized with long hair, a bushy tail, and erect ears. The Tlingit also kept a separate breed of ‘Tahltan bear dogs,’ fox terrier-sized dogs that were quick and fearless in holding a bear at bay until the hunter arrived. The highly prized bear dog may have been kept only by the Tlingit and some of the nearby Athapaskan groups.”

Some of the tribes, such as the Quileute and the Central Coast Salish tribes, had wool-bearing dogs which were sheared and their wool used in blankets. Anthropologist Wayne Suttles, in his article on the Coast Salish in the Handbook of North American Indians, describes this dog as

“a small to medium-sized, Pomeranian-like, nonbarking animal, generally white, with a thick, compact coat that was shorn with a knife in the spring.”

“The wool of the dogs was much finer than that of the goats, and the yarns produced from it were very much like those of a fine grade, commercial wool.”

This dog apparently went extinct in the middle of the nineteenth century. Peter Simpson, in his chapter in Shadows of Our Ancestors: Readings in the History of Klallam-White Relations, reports:

“With the arrival of the Hudson’s Bay Company and their even-then-famous blankets, the tribes neglected their isolated breeding of ‘wool dogs’ which soon became mongrelized and their fur unworkable.”

Paula Gustafson, in her examination of Salish weaving, does not feel that dog hair was widely used in weaving. In her book Salish Weaving, Gustafson reports:

“Canine hair, no matter from what breed, is not a good spinning fibre, and it is particularly difficult to work with using the suspension-spindle method of spinning employed by the Salish.”

She feels that the “dog hair” blankets reported by the early European explorers were most likely woven from mountain goat hair mixed with some dog hair.

A protein analysis of nine Coast Salish blankets found that dog hair was used in five. Nikhil Swaminathan, in a report in Archaeology, reports:

“The dog hair seems to have been incorporated into common nonceremonial blankets and disappears from them not long after contact with European explorers, who arrived in the late-eighteenth century with cheaper textiles.”

The Plateau culture area is generally described as the area between the Cascade Mountains and the Rocky Mountains in Washington, Oregon, Idaho, British Columbia, and Western Montana. From north to south it runs from the Fraser River in the north to the Blue Mountains in the south. Most of the Indian nations in this culture area have linguistic, cultural, and/or historic ties with the Northwest Coast.

Among the Kootenai, dogs were considered to be family rather than personal property. In spite of being considered part of the family, H.H. Turney-High reports in his Ethnography of the Kutenai:

“Dogs were never tolerated inside the lodge, even in the coldest weather.”

With regard to the Salish-speaking Flathead, Samuel Lang, in his chapter in Lifeways of Intermontane and Plains Montana Indians: In Honor of Verne Dusenberry, reports:

“The dog, the only domesticated animal among the Flathead prior to their acquisition of the horse, was apparently not used as a pack animal.”

Among the Okanagan, dogs were not used for hauling. They were, however, used in hunting. In hunting mountain sheep, dogs were used to drive the animals to the waiting hunters.

Many of the tribes used dogs in hunting deer and elk. The Wenatchee, Entiat, and Chelan, for example, would use dogs to drive deer into the Columbia River where they would be killed.