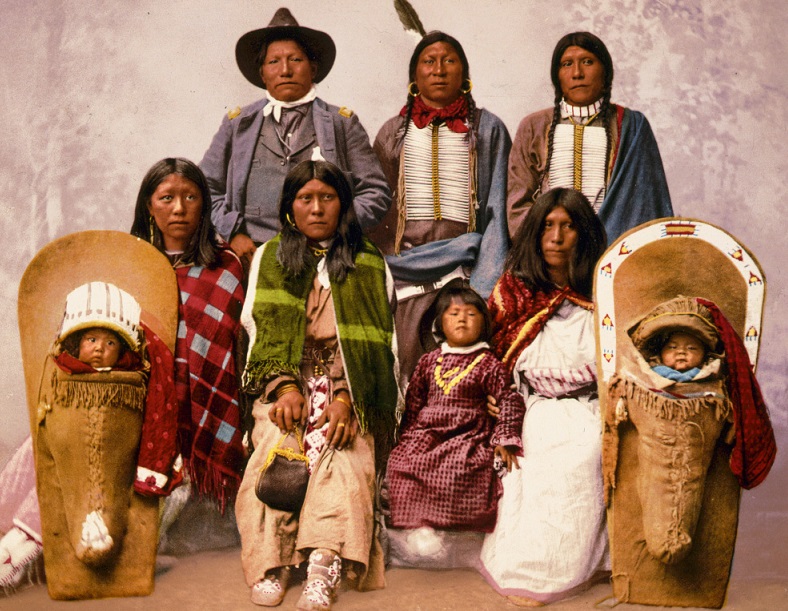 Mountains in present-day Colorado, west to the Sevier River in Utah. Their traditional territory extended as far south as the upper San Juan River in present-day New Mexico and as far north as southern Wyoming.

While anthropologists generally classify the Utes as a Great Basin tribe, they were traditionally more of a mountain-dwelling tribe. Carl Waldman, in his book Encyclopedia of Native American Tribes, writes:

“The forested slopes of the Rockies offered much more wildlife than the Basin floor and the Basin uplands. And the rivers flowing westward from the Great Divide provided plentiful fish for food.”

With regard to language, the Ute language is a part of the larger Uto-Aztecan language family and within this large language family it belongs to the Southern Numic sub-family which also includes Mohave, Paiute, Kawaiisu, and Chemehuevi.

The Ute were never a single unified tribe. There are several bands of the Ute:

(1) the Weminuche (Weeminuche) or Ute Mountain Ute whose homeland is the San Juan drainage of the Colorado River,

(2) the Tabeguache (also known as Uncompahgre),

(4) the Yampa whose homeland is in northwestern Colorado,

(5) the Uintah whose homeland ran from Utah Lake east through the Uinta Basin,

(6) the Muache (Moache) whose homeland ranged south along the Sangre de Cristos as far south as Taos,

(7) the Capote of the San Luis Valley and the upper Rio Grande, (8) the Sheberetch in the area of present-day Moab,

(9) the Sanpits (San Pitch) in the Sanpete Valley in central Utah,

(10) the Timanogots near Utah Lake,

(11) Pahvant who lived in the deserts surrounding Sevier Lake, and

Each Ute band had a well-defined territory, but their territorial claims were not exclusive. Attorney Parker Nielson, in his book The Dispossessed: Cultural Genocide of the Mixed Blood Utes, points out:

“Land was viewed as a gift of creation, to be shared in common, and was not an object of private possession.”

Presently, under the administration of the United States the Utes occupy three reservations:

Uintah and Ouray Reservation: located near Fort Duchesne, Utah, this reservation is the home of the White River descendants.

The domestic horse was brought to North America by the Spanish colonists in New Mexico. Following the Pueblo Revolt of 1680, the horse was traded to other tribes and brought many changes to Native cultures.

For the Ute, the adoption of the horse brought about many changes in their lifestyle. While their food preferences and their migrational patterns remained somewhat the same, with the horse they were able to cover more territory and to be more efficient in the use of the resources of their territory. Historian Richard Young, in his book The Ute Indians of Colorado in the Twentieth Century, reports:

“With increased mobility and the ability to transport food over greater distances, previously disperse family groups now concentrated in large band camps. Hunters ventured far out onto the plains and hunted buffalo much more frequently than in the past; food became more plentiful and hunger less of a concern.”

With the horse came an increase in intertribal conflicts. Richard Young writes of the Ute:

“During the seventeenth century, the previously peaceful Utes often waged war on their neighbors.”

One of the prime objectives of Ute warfare was to obtain horses as well as other loot. In addition, the Ute warriors would often capture Indian women and children who they could trade with the Spanish and other settlers for horses.

“They bartered with the desert tribes to the west, with the Navajo and Pueblo Indians to the south, and with the Plains Indians as far distant as the panhandle of present-day Texas and Oklahoma.”

The Ute would often trade deer and buffalo hides and meat with the Pueblos for corn and other agricultural products. They would also trade hides with the Spanish and other Europeans for horses, knives, and manufactured articles.

It was not uncommon for trade to revolve around human captives. The Ute, for example, would obtain Indian women and children from other tribes either through raids or through trade with other tribes. They would then trade them to the Spanish settlers for horses. Historian Richard Young writes:

“Hispanic settlers who purchased the captives in this illegal but popular form of trade would then either resell the captives or raise them in their own households.”

Among the Ute, as was typical of many gathering and hunting tribes, the primary political unit was the band. Loosely organized, the band leadership had only a limited, non-coercive authority. In other words, leaders led through their ability to persuade. Membership in Ute bands was easily changed. Historian Richard Young writes:

“Families were free to leave bands, and an individual’s band membership was easily changed.”

As with other Great Basin groups, band membership among the Ute was very fluid. Parker Nielson reports:

“Change of Ute band affiliation was a casual affair in which Utes freely intermarried with or adopted members of other bands and tribes.”

With regard to Ute social organization on a larger scale, anthropologist Bertha Dutton, in her book The Ranchería, Ute, and Southern Paiute Peoples: Indians of the American Southwest, reports:

“Defensive war and the social bear dance were the only activities requiring the cooperation of a tribal unit larger than the family.”

Ute villages generally had two chiefs: a chief spokesman and a civil chief. During times of war there might also be a war chief. As with the other Indian nations of the Great Basin, there were no ruling families and no hereditary titles. Status and prestige were based on individual accomplishments, not on family lineage. With regard to the process of selecting a new chief among the Ute of Colorado, historian Richard Young reports:

“The Weeminuche did not have a hereditary chieftaincy; rather, the chief was chosen for his personal character and abilities, often by his predecessor.”

While nineteenth-century non-Indian politicians seemed to believe that Indian nations were somehow lawless since they didn’t have formal police departments, jails, and courts, all Indian nations did have laws which were based on oral traditions.  Among the Southern Ute, for example, crimes such as stealing and murder were not seen as a concern of the band, but of the family. The primary methods of social control were gossip and ostracism.

Many Indians tribes, particularly the Great Plains tribes, had voluntary associations or warrior societies. These tended to be absent among the Great Basin tribes. The only association among the Southern Ute was the Dog Company that functioned as both a warfare training mechanism and as a young men’s elite. Not all young men joined the Dog Company, as often their families could not spare them. When the camp moved, the Dog Company acted as lookouts and lagged behind as a rear guard.