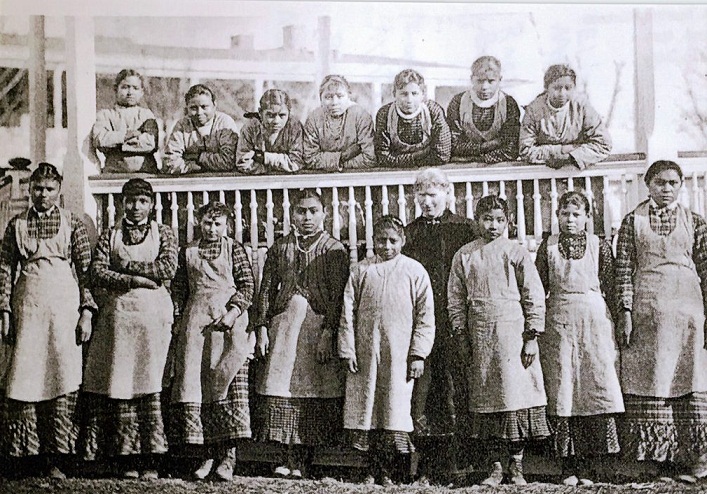 In 1871, the United States governmental policies toward American Indians changed from dealing with tribes as nations to focusing on the assimilation of individual Indians. Assimilation was, and still is, based on a viewpoint that sees immigrants coming to the United States and then become “good” Americans by learning English and adopting American customs. If others could do this, the assimilationists argued, and still argue, then American Indians should be required to do the same.

In the language of nineteenth century assimilation, Indians were viewed as “barbaric” and thus the goal of assimilation was to “civilize” them. The ideal model of “civilization” was, of course, mainstream American society. One important “civilizing” force in assimilation was education. Schools, according to this viewpoint, could mold American Indian youth into Americans in which the values of thrift, discipline, individuality, and Christianity would more closely reflect those of mainstream America.

Writing in 1893 about the goals of Indian education, Father Palladino states: “A plain, common English education, embracing spelling, reading and writing, with the rudiments of arithmetic, is book-learning sufficient for our Indians. Anything beyond that for the present at least, in our candid opinion, would prove detrimental, rather than beneficial; since it might serve to encourage their natural indolence at the expense of what they need most, industrial education.” In explaining the need for boarding schools, Father Palladino writes: “How can you civilize these savage beings, except you withdraw them from the blighting influences that encompass them on every side?”

The model for American Indian boarding schools was the Carlisle Indian School. Founded in 1879 in an abandoned army post in Pennsylvania, the goal of Carlisle was to strip all vestiges of Indian culture from the Indian students: they were to speak only English, they were to dress in the American style, they were to eat American foods, they were to worship the Christian gods, and they were to live in American-style houses.

By locating the school far away from any reservation, it was felt that the children could be removed from the evil pagan influences of Indian life and Indian families.

The school was headed by Captain Richard H. Pratt, the former commandant of the Fort Marion Prison in Florida, which served as an Indian prison. While Pratt liked individual Indians, he had no use for Indian cultures and felt that these cultures would have to be destroyed if Indian people were to survive. Like many other Americans, Pratt felt that Indian ways were inferior in all respects to those of non-Indians. Thus the slogan for Carlisle was “Kill the Indian, Save the Man.”

When the students first arrived at the school, they would be given Anglo-Saxon Christian names (names such as George Washington and Thomas Jefferson soon became common among the Indian students), their hair would be cut, and their clothes replaced with European-style dress (their old clothes were usually burned).  To reinforce the superiority of English, they would also be forbidden to speak any Indian language.  A military model was used to instill discipline and conformity. The students wore military-style uniforms and marched to their classes.

Since men were supposed to do the farming, boys were given an agricultural education while the girls were trained in housekeeping skills. Girls were taught all of the skills-cooking, sewing, cleaning, laundry-that a housewife or a servant would need to know. The emphasis was on the skills necessary for a mythological family farm, not the reality of commercial agriculture as it existed in the late nineteenth century.

Students would spend half of the day in classes where the curriculum emphasized the English language, practical skills, and Christianity. The boys would then spend half a day working on the school farm where they raised most of the food for the school. The girls would work in the laundry where they would not only wash all of the clothes for the school, they would also do all of the mending and other “household” chores. The goal of their education was to train the boys to be farm workers and the girls to become servants.

Speaking English was an important part of not only the school curriculum, but also school life. Students who were caught speaking any Indian were severely punished. This punishment included beatings, incarcerations (the school had its own jail), and applying lye to the tongue.

Another important part of the curriculum at Carlisle was sports. The school had sports programs that included track, baseball, football, and the newly created basketball. Carlisle sports teams often competed against college and university teams and its football team had a national reputation. Among the Carlisle Indian athletes was Jim Thorpe (Sauk and Fox) who won the pentathlon and decathlon at the 1912 Olympics in Stockholm, Sweden. “Sir, you are the greatest athlete in the world,” Sweden’s King Gustav V told him. President William H. Taft said “Your victory will serve as an incentive to all to improve those qualities which characterize the best type of American citizenship.”

When students had completed their education, they were indentured to an Anglo family for three years. The government paid the family $50 per year for the stu¬dent’s medical care and clothing.

While the Carlisle Indian School was considered to be the premier boarding school in the United States, its success in actually educating Indian students and assimilating them into mainstream American culture may have been less successful. By 1899, Carlisle Indian School had graduated only 209 of the 3,800 students which had attended it.

Back on the reservations, many of the Indian agents were not enamored with the off-reservation boarding schools. In 1897, the Indian agent for the Fort Peck Reservation in Montana reported that boys returning from off-reservation boarding schools such as Carlisle Indian School can play baseball pretty well, but don’t seem to be interested in work. With regard to the women who returned from the boarding schools, he wrote: “Their whole life is made abortive and the money spent on their education wasted, by allowing them to return…In many instances the practical results of returning them to the reservation is to furnish a better class of prostitutes for the same; yes, and made prostitutes by the so-called educated young Indian men, not camp Indians, though they naturally drift to becoming their wives.”

Captain Richard Pratt, the founder of the Carlisle Indian School, told a New York Ministers Conference in 1904: “I believe that nothing better could happen to the Indians than the complete destruction of the Bureau”  and “Better for the Indians had there never been a Bureau.” A few weeks later, Pratt was told that his services were no longer required. However, he continued to be an outspoken critic of the Indian Bureau and federal Indian policies.

The success of Carlisle’s ability to assimilate Indian students into American culture can be seen in the 1912 address to the graduating class by one of its students who will later be known as Chief Buffalo Child Long Lance, a Lumbee from North Carolina:

“When we have gone through, for the last time as students, the brick portals of this institution, into the great world of competition, we do not wish to be designated as Cherokees, Sioux, or Pawnees, but we wish to be known as Carlisle Indians, belonging to that great universal tribe of North American Indians, speaking the same language and having the same chief — the great White Father at Washington.”

In 1918, the Carlisle Indian School was closed. Officially, the school was closed because the Secretary of War requested the property for a hospital for soldiers returning from Europe. Unofficially, it was felt that the school’s administration had angered too many people in the Bureau of Indian Affairs with his criticisms of federal Indian policies.

Ultimately, boarding schools such as the Carlisle Indian School were intended to destroy American Indian tribal identity. In its place, the students were to gain racial awareness. American society is racist and Indians are viewed as a single racial group rather than several hundred distinct tribal or cultural entities. Boarding school students began to view themselves as Indians, a racial group, rather than as tribal members.