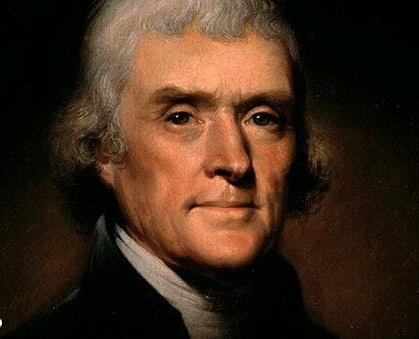 Thomas Jefferson is not only one of the best-known founders of the United States and a former President: he also helped formulate American Indian policy during the early years of the nation.

While many Americans during the eighteenth and nineteenth centuries strongly denied the antiquity of Indian people in North America and assumed that the great mounds found throughout the east had to have been constructed by non-Indians, Jefferson looked at the data in a scientific perspective and concluded that Indians had in fact constructed the mounds.

In 1784, Thomas Jefferson dug out a small, twelve-foot high mound on his Virginia property near the Rivanna River. He uncovered several layers of burials and concluded that the mound had been the work of the present Indians’ ancestors. In 1787, Thomas Jefferson published his Notes on the State of Virginia which examined the origins of native people in the area. The book included a description of his excavations of the Indian mound. Jefferson felt that American Indians had arrived at this continent from Asia, that they had arrived speaking only one language, and that, once here, their language had divided into a thousand different languages. He also postulated that Indians have been on the continent for an immense length of time. He wrote:

I suppose the settlement of our continent is of the most remote antiquity.”

With regard to the linguistic diversity of American Indians, he writes:

“The time necessary for the generation of so many languages must be intense.”

His views were attacked and he was called “a howling atheist.” Modern archaeological and linguistic studies, however, have supported Jefferson’s claims.

In archaeology classes, we often consider Jefferson to be the “father of American archaeology” in reference to the fact that he conducted the first systematic, scientific archaeological excavation in the U.S.

The sovereignty of Indian nations was expressed in the U.S. Constitution. Under the new U.S. Constitution, the American leadership-President George Washington, Secretary of State Thomas Jefferson, and Secretary of War Henry Knox-assumed that Indian policies were now vested in the federal government rather than in the state governments. Furthermore, they saw Indian affairs being directed by the executive branch. They saw Indian policy as a branch of foreign policy and viewed Indian tribes as foreign nations.

In a 1793 report to President Washington, Thomas Jefferson wrote:

“The Indians had the full, undivided and independent sovereignty as long as they choose to keep it, and this might be forever.”

Recognizing Indian sovereignty implied a recognition of Indian ownership of their land. In 1786 Thomas Jefferson stated:

“It may be taken for a certainty that not a foot of land will be taken from the Indians without their consent.”

The basic problem for land-hungry Americans was, therefore, how to obtain Indian consent to sell their land. In an 1802 letter to Secretary of War Henry Dearborn, President Jefferson put forth a plan on how to extinguish Indian title to their lands:

“There is perhaps no method more irresistible of obtaining lands from them than by letting them get in debt, which when too heavy to be paid, they are always willing to lop off by a cession of land.”

“It is hereby announced and declared, by the authority of the United States, that all lands belonging to you, lying within the territory of the United States shall be and remain the property of your Nation forever, unless you shall voluntarily relinquish or dispose of the same.”

Another solution to the Indian problem, in Jefferson’s view, was intermarriage. On a number of occasions he told delegations of visiting Indians:

“You will unite yourselves with us and we shall all be Americans. You will mix with us by marriage. Your blood will run in our veins and will spread with us over this great Island.”

Americans were less than enthusiastic for that solution and no responses from the Indian delegations were recorded. During the next two centuries, however, there was massive intermarriage between Indians and non-Indians.

Early in his first term as President, Thomas Jefferson made a secret agreement with Georgia in which he indicated that the United States would remove all Indians from the state. With growing anti-Indian sentiments in the United States, Jefferson began to formulate a plan to remove all Indians from the East. The problem, of course, was what to do with them when they were removed. Part of the problem was solved with the purchase of the Louisiana Territory as this provided a place for the displaced Indians. In 1803 he formally proposed that all Indians in the United States be removed to west of the Mississippi. While a bill to this effect passed the Senate, it failed to gain the support of the House.

On other occasions, Jefferson authorized Indian delegations to travel west of the Mississippi to see if there were lands which would be suitable for them. While removal did not take place during his lifetime, the process which he set in motion did take place.

Like nearly all Europeans in the eighteenth and nineteenth centuries, and like many Americans today, Jefferson failed to acknowledge American Indian agriculture. While American Indians had a highly developed agricultural system which provided a surplus to support many European immigrants, Jefferson insisted that the Indians lived primarily by hunting. Part of this was a male bias which is often found today: hunting tended to be men’s work and therefore it was assumed that it was more important than women’s work (farming). This ignores the fact that women’s work provided the majority of the calories which were consumed.

“First: to encourage them to abandon hunting, to apply to the raising stock, to agriculture and domestic manufactures, and thereby prove to themselves that less land and labor will maintain them in this better than in their former mode of living.”

“Secondly, to multiply trading houses among them, and place within their reach those things which will contribute more to their domestic comfort than the possession of extensive and uncultivated wilds.”

“When they withdraw themselves to the culture of a small piece of land, they will perceive how useless to them are their extensive forests, and will be willing to pare them off from time to time in exchange for necessaries for their farms and families.”

Like many others, Jefferson failed to understand that Indians had more leisure time than did Europeans and that it took fewer hours of work in their agricultural system to provide them with the calories needed to survive. However, as Jefferson appears to understand, when a desire for new material goods is introduced, then the economic system has to change from one based on filled needs to one based on filling wants. The purpose of the trading houses was to convert luxuries into necessities.

In many respects, Thomas Jefferson’s views of Indians reflect those commonly found in eighteenth century America, but these views are often tempered with more of a scientific approach than a religious approach. More importantly, his views on Indians, and on government, set the stage for nineteenth century American Indian policies (including the forced removal of Indians from their homelands) and even twentieth century policies. It is not possible to study the history of U.S. policies regarding Indians without seeing the hand of Thomas Jefferson.

Indians as People Under the Law