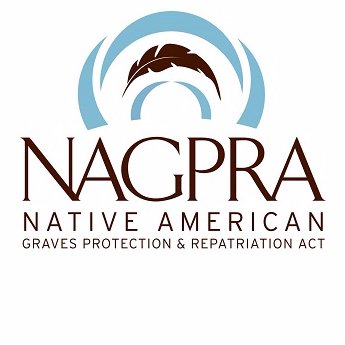 One of the concerns of American Indians has been the ongoing desecration of American Indian graves and the sale of sacred artifacts. There has been a long history of the ghoulish exploitation of Native American remains in museums and popular tourist attractions. After decades of struggles by Native American tribal governments and individual Indians, in 1990 Congress passed the Native American Graves Protection and Repatriation Act (NAGPRA). This act requires a number of institutions, such as museums, federal agencies, and universities, to inventory certain categories of human remains and associated funerary objects. Culturally affiliated tribes are then to be notified of these remains and objects so that they can be reclaimed by the tribes.

With NAGPRA Indians are allowed to designate what is sacred to them. Previous legislation, in the form of several archaeological acts, had defined the past, and who determines what is important in the past, without consultation with Indians. NAGPRA has marked a significant change with regard to the rights of Indian people and the practice of American archaeology. No longer does science (i.e. archaeology) have a monopoly on defining the meanings of the past: with NAGPRA, American Indian groups are invited to assign their own spiritual and historical meanings to archaeological sites and artifacts.

NAGPRA jurisdiction includes Indian burials, burial artifacts, and sacred cultural objects whether they are found on federal, state, local, or private land. Items do not need to cross state lines to be subject to this law. Under NAGPRA, any human remains found in North America that predate European contact, of whatever age, are considered American Indian.

NAGPRA also makes it a felony to traffic in Native American human remains and burial artifacts. NAGPRA attempts to undercut the lucrative market in Indian grave goods and cultural treasures, especially items that have sacred significance. NAGPRA makes it possible to prosecute dealers and collectors as well as looters. Previous archaeological laws had focused solely on the prosecution of looters.

NAGPRA has brought about changes in the tribes. Many tribes responded to NAGPRA by creating advisory councils to deal with cultural issues, including outsiders who are dealing with cultural issues. For anthropologists and other researchers, this often means that fieldwork has to begin by contacting and making presentations before the cultural committees. NAGPRA is a powerful tool which enables the tribes to control and direct archaeological exploration.

One of the most visible impacts of NAGPRA involves museums. While most visitors to museums notice only the displays, museums also house a great deal of material which is not displayed, but is held for further analysis. With NAGPRA, museums can no longer hold onto American Indian human remains and funerary objects indefinitely, but must contact the culturally affiliated tribes to discuss the management of these items. In many cases, the tribes have demanded the return of human remains for reburial. Because of NAGPRA, museums now consult with Native American tribal elders regarding exhibits which might be culturally offensive.

There are some archaeologists and physical anthropologists who feel that NAPGRA, by making it more difficult to excavate aboriginal grave sites and to study the bones of the dead, has limited their ability to make new findings regarding the past. They feel that future advances in knowledge from continuing archaeological and osteological research are in doubt.

One of the major challenges to NAGPRA began in 1996 when a skeleton was found on the banks of the Columbia River. Law enforcement was notified of the finding and law enforcement then called in forensic anthropologist James C. Chatters to look at the remains. His initial impression is that the remains are not recent, but are most likely those of a European settler. However, the discovery of a leaf-shaped stone spear point in the man’s pelvis was unusual. Radiocarbon dating showed that the man died about 7265 BCE, thus making him Native American under the law.

Under the terms of the NAGPRA, four tribes — Colville Confederated Tribes, Nez Perce, Confederated Tribes of the Umatilla Reservation, and the Yakama Indian Nation — claimed the remains as ancestral. Three of the four tribes wanted the skeleton buried without further study, but the Colville indicated a willingness to have it studied first.

The scientists were dismayed as only a handful of skeletons of this age have been discovered in North America. A group of eight scientists filed the first lawsuit – Bonnichsen et al v. United States – to ever challenge a repatriation under the NAGPRA. One of the points raised in the lawsuit is that the skeleton did not have a demonstrated relationship with any present-day Native Americans and that this relationship may be determined by further study. The lawsuit also raised First Amendment concerns about NAGPRA and government control and manipulation of information. If scientists were prohibited from studying the skeleton, they and the American people would be deprived of potentially irreplaceable information about the past.

The lawsuit stopped immediate repatriation and court decisions permitted the scientists to study the remains. Eventually, the skeleton will be repatriated, but first the scientists hope to give him an opportunity to teach us about the past.