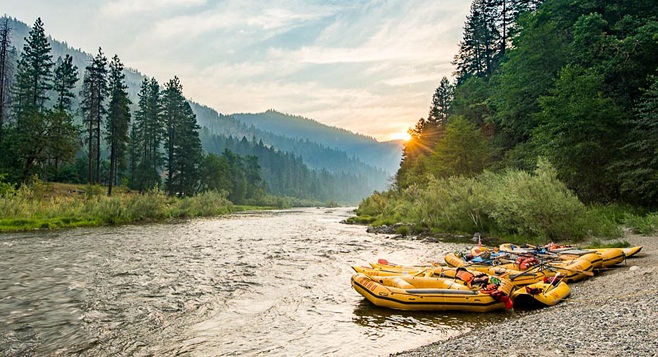 In Oregon and California, an agreement has been reached for the removal of four hydroelectric dams from the Klamath River. The tribes in the area have fought for decades for the removal of these dams because they block salmon from their spawning grounds.

The struggle for the removal of the Klamath River dams is only one small part of the story of Dam Indians-the fight between the United States and the Indians over dams. In this diary, I would like to look at some of the background of this struggle.

When the Europeans first came to this continent, they found it filled with free-flowing, unpolluted rivers which were filled with fish. For the Indians – and subsequently for the European explorers, trappers, and traders – the rivers served as highways. For Indian people the rivers were also a source of their livelihood as fish was an important part of the diet throughout the country. In addition, Indian people saw the rivers as living spiritual entities and an important part of their own spiritual existence.

It wasn’t long before there were clashes between the Indians and Europeans over the rivers. In the name of “development” the Europeans blocked the flow of the water in the rivers to provide power to their mills. The Indians soon found that there were fewer fish in the river.

The real conflict between European and Indian cultures over rivers, however, happened during the twentieth century and continues today. The United States in the name of “progress”, “development,” and “civilization,” sought to dam the rivers for flood control, for hydroelectric power, and for irrigation. Often led by the Army Corps of Engineers – a military body not particularly friendly to Indians – the government constructed dams that often ignored treaty rights, Supreme Court decisions, and human decency.

The assault on Indian people through the construction of dams during the twentieth century is not a pleasant story. It is, at times, an account of disgraceful and dishonorable actions sometimes motivated by greed and racism. The need to build dams is more important to the United States than honoring the solemn pledge of President George Washington.

Dams have caused a number of problems for Native Americans. First, they often destroy spawning runs for fish. Not only are fish a traditional food source, but they are often an integral part of tribal spirituality.

In many instances, the dams have flooded the best farm lands on the reservations. This seems to contradict the history of federal government efforts to turn Indians into self-sufficient farmers.

The dams have also destroyed many Native American spiritual areas. This has included ceremonial areas as well as grave sites.

In the west, water rights are a major concern. Water law in the west grants the right to use water, both from streams and from groundwater, on the date of first use of this water. According to the Winters Doctrine, a legal concept which has been upheld by the Supreme Court, Indian reservations have first priority for water. Many dams, and particularly those which provide irrigation to non-Indians, have been constructed which ignore Indian water rights and have caused water shortages on the reservation.