Following is the legal timeline regarding the lawsuit of the oldest indigenous Native American tribe still found in New Jersey – the NJ Sand Hill Band of Lenape and Cherokee Indians vs. the State of New Jersey.  The Tribe has appealed to the UN to try this case in the World Court.  The territory involved now includes Manhattan, Delaware, and Pennsylvania as well as New Jersey.

Legal documents discussed in the timeline can be found here.

February 17, 2009 – The NJ Sand Hill Band of Lenape and Cherokee Indians files the first Complaint in a lawsuit against the State of NJ for genocide, treaty violations, and civil rights violations. #2:09-cv-683. The initial filing was for a three judge court in Philadelphia.

April 21, 2009, Imagine Chief Holloway’s surprise when he walked into Courtroom No 10 on April 21 into what WAS a Rule 16 hearing. Not only that, but all the defendants were told to bring counsel. Not all of them did. The State Attorney General was actually permitted to argue even though the State of NJ had not even answered the complaint yet.

Chief Holloway was not permitted to bring anyone into the Court room with him for this meeting that actually turned into a Rule 16 hearing. The defendants brought in a reporter from the Star Ledger who is friendly with Trenton, after which a story dismissive of Chief Holloway’s case was published. Believe me, if I was allowed in – I would have been there. But the Plaintiff was specifically instructed by the court not to bring anyone with him. Why exactly?

April 23, 2009 The Court orders the Sand Hill to retain legal counsel and will not permit Chief Holloway to represent his own tribe. The court only gives Chief Holloway 2 weeks to comply and retain an attorney and just two weeks after that to file their complaint.

“No further amendments will be permitted, except to permit the petitioners to ask to join additional parties.”

May 8 – Deadline given to Sand Hill tribe to retain an attorney in the April 23 Court Order.

May 22 – Deadline given to Sand Hill for their newly retained attorney (if they are able to somehow quickly procure one) to file their complete complaint as ordered by the court on April 23.

Chief Holloway was asked to do the near impossible – retain an attorney and have the entire complaint submitted in mere DAYS, (which he did.) In contrast, the Court allowed defendants who did not answer the complaint in a timely way or at all, until June 26 to file a motion to dismiss. Some were given until July 2, 2009. Monmouth County was given till OCTOBER. Chief Holloway requested default judgments against the defendants who had not bothered to even answer the complaint, but the judge denied the request.

June 26 – Deadline for the Defendants to file motion to dismiss.

July 2 – Deadline for the defendants to jump onto the Motion to dismiss.

July 20, 2009 – Deadline for Chief Holloway to file opposition to the motion to dismiss. 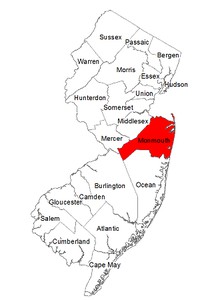 October 2009 – Monmouth County FINALLY answers the complaint. The Judge lets them join the motion to dismiss.

The rub for the court is that if the motion to dismiss is denied, the case can go to discovery where Chief Holloway will finally be permitted to prove his ancestry, which he was prepared to do when he filed the lawsuit. Consequently, the Judge is put in a Catch 22. Deny the claim to avoid discovery, have it appealed and moved to Philadelphia, where discovery would happen anyway, or deny the motion to dismiss, and allow the trial to go to discovery which would allow the Sand Hills to get a fair and impartial hearing which allegedly would ruin a promising law career with the political power brokers in Trenton.

What to do, what to do…. What would save a Judge from a dilemma like this? Well, to never, ever, rule on the motion to dismiss, or to simply take early retirement. Which allegedly appears to be the fork taken here. Allegedly Judge Hayden took early retirement leaving the case to Judge Patty Schwartz who does not appear as if she will ever rule on that motion to dismiss. It appears the court is trying to avoid discovery.

However, despite the glacial approach to the motion to dismiss, it took Judge Schwartz less than 24 HOURS to dismiss the third amended complaint which was amended to add parties to the lawsuit – the very thing allowed, according to the court order of April 23, 2009. It also appears that Judge Hayden and Judge Schwartz had ex parte verbal requests from defendants’ counsel and issued Orders as if the docket had actually been reviewed.

November 23, 2010 – The court orders no more motions until a “conference” takes place. That conference still has not happened as of this writing.

January, 2010, MONTHS later, Sand Hill Counsel asked WHEN the court would finally rule on the motion to dismiss and was told the court was in no particular hurry to ever schedule it.

June 4, 2010 – The Sand Hill legal counsel filed a complaint with the Third District Court of Appeals in Philadelphia regarding what appears to be violations of the Judicial Misconduct Act Section 3(h)(1), and 3(h)(3)(B).

June 16, 2010 – the Sand Hill file the Third Amended Complaint that adds parties to the lawsuit – which is specifically allowed by the Court Order of April 23, 2009. New York, Delaware and Pennsylvania are now involved in addition to New Jersey.

June 16, 2010 Assistant Essex County Counsel arrogantly requests that the 3rd Amended Complaint is dismissed and tells Judge Patty Schwartz about using sanctions against the Sand Hill for having the temerity to file an amended complaint which was actually allowed under the April 23 Court Order.

June 17, 2010 ONE DAY after the 3rd amended complaint is filed that joins other parties to the lawsuit, the Judge DENIES the 3rd Amended complaint without prejudice. She basically punts so that the Sand Hill can bring it up again later, and she doesn’t have to deal with it now. She has effectively “tabled” it.

June 22, 2010 – Based on the Court’s summary denial of the 3rd Amended Complaint before the “ink was even dry”, and the appearance of purposely avoiding discovery for months by not ruling on the motion to dismiss, the Sand Hill have formally requested of the UN Special Rappateur that the case go to the World Court.

The reason why the motion to dismiss is such a problem for the defendants is that they are basing their argument on state law, whereas any case involving Native Americans is clearly FEDERAL in nature. The defendants have no legal basis for their motion to dismiss because the motion to dismiss is based on NJ law. The plaintiff argues that the complaint is a violation of the Non-Intercourse Act which is written and enforced by CONGRESS. The Judge has also failed to issue an order regarding the request for a declaratory judgment that would declare once and for all if FEDERAL law applies or STATE law.

The interesting thing is, the UN has the documentation, and evidence, and has already done investigations of its own validating his claims BEFORE meeting with Chief Holloway. In stark contrast, the Federal government has NO IDEA what evidence the Sand Hill tribe has, because the action of one Judge in Newark is preventing discovery. The Federal government is at a clear disadvantage should this go to the World Court.