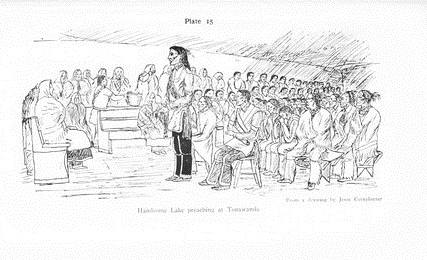 Handsome Lake was born into the Seneca Wolf clan in 1735. (The Seneca are one of the six nations of the Iroquois Confederacy.) As a young man, Handsome Lake followed the traditional Iroquois role for men and was a warrior. In 1765 he was a part of a group of 100 Seneca warriors, under the leadership of Giengwahtoh (Old Smoke). The war party journeyed to the southeast where they raided the Cherokee and the Choctaw.

In 1777 he was a part of the Iroquois warriors’ council which met with the British regarding the Iroquois role in the American Revolution. Handsome Lake was one of the warriors who argued that the war was a family affair and was therefore of no concern to the Iroquois. However, in 1778 Handsome Lake was one of the Seneca warriors who joined the British and the Cayuga in an attack against the Americans at Wyoming and Forty Fort in Pennsylvania.

In 1780, Cornplanter – Handsome Lake’s brother – moved to the Allegheny Valley. Handsome Lake, an alcoholic, accompanied his brother. By 1795 Handsome Lake was an invalid living in Cornplanter’s house. His condition is attributed to his drinking and to his having offended the Creator.

In 1798 five Quakers arrived at the Seneca town of Jenuchshadago. The Seneca were hungry because floods and frost had damaged their corn harvest. After consideration of the Quaker request to live among them and teach them, Cornplanter told them: “Brothers, you never wished our lands, you never wished any part of our lands, therefore we are determined to try to learn your ways.” In this way the teachings of the Quakers reached Handsome Lake.

At the time when the Strawberry festival was about to be held in 1799, Handsome Lake, who had become a notorious drunkard, was very ill. He was a babbling invalid who has wasted away to a mere skeleton. His relatives viewed him as a victim of malaria and, more importantly, of its cure, rum.

His relatives heard him call out “Niio!” (so be it) and they saw him stumble out of his cabin and fall. His daughter Yewenot  and her husband Hatgwiyot carried the limp figure back to his bed. Thinking that he was dead or dying, they sent for his closest relatives, Cornplanter and Blacksnake. When Blacksnake arrived he found that Handsome Lake had no breath or heartbeat, but detected a warm spot on his chest. After a couple of hours, Handsome Lake returned to this world and told of meeting three men sent by the Creator. The message from the Creator contained four words that summarized the evil practices of the people: whiskey, witchcraft, love magic, and abortion/sterility medicine. This was the beginning of a new religion.

Handsome Lake then described his vision in council. His words were translated for the benefit of the Quaker schoolmaster who wrote it down. (Describing visions in council was a traditional activity and thus was not unusual.)

During a second trance which lasted about seven hours, Handsome Lake had a sky journey during which he was told the moral plan of the cosmos. This second vision established the core of the new religion’s theology. During his sky journey Handsome Lake met both George Washington and Jesus. Jesus told him:

“Now tell your people that they will become lost when they follow the ways of the white man.”

In this second vision, a moral code was revealed to Handsome Lake in a series of vignettes. This code outlawed drunkenness, witchcraft, sexual promiscuity, quarreling, and gambling. In addition, reluctance to have children, unfaithfulness to one’s mate, fiddle dancing, and card playing were to be considered to be forms of misconduct.

In this second vision, Handsome was shown two spheres, which he later described as being like color liquid, which were suspended in the eastern sky. One of the spheres was red and one was yellow. The four messengers tell him that if one should fall there would be great calamity throughout the earth. The messengers told him that in 2010 mankind will perish from the earth.

In 1800 Handsome Lake had a third vision in which the Great Spirit communicated concern about the condition of the Iroquois. The angels who guided him deplored the fact that the Indians had lost so much of their land and that the Europeans were so arrogantly sure that the mind of the Creator was written in their book. Handsome Lake was told to have his words written down so that Indians can always remember them.

In this third vision, Handsome Lake was also instructed to advise his people that they must keep their traditional religious ceremonies, particularly the Midwinter Ceremony.

Handsome Lake’s gospel – called Gai’wiio which means “good message” — emphasized the role of the nuclear family — husband, wife, and their children — rather than the Iroquois matrilineal clan or extended family. While women had traditionally owned the land and worked the fields, Handsome Lake’s vision called for the men to become farmers. While the Iroquois long houses were traditionally owned by the matrilineal clan, Handsome Lake’s vision called for the man to build a house for his wife and family rather than living with an extended family.

Handsome Lake’s code prescribed four sacred rituals: (1) the Great Feather Dance to honor children and life, (2) the Drum Dance to honor the spirit beings who watch over the Haudenosaunee (Iroquois), (3) the Men’s Chant to honor the Creator, and (4) the Peach Pit Bowl Game and the Sustenance Dance.

Handsome Lake made four predictions about the future: (1) that the Iroquois chiefs would argue among themselves and abandon the Great Council, (2) that the people would cease their ceremonies and return to witchcraft, (3) that a woman well past childbearing age would give birth, and (4) that a child would bear a baby. When these four predictions are fulfilled the end of the world would be near.

In 1801 Handsome Lake was elected to the Seneca tribal council and he was one of the Seneca leaders who traveled to Washington, D.C. to meet with President Thomas Jefferson.

Later, a non-Christian group led by Red Jacket would state that while Handsome Lake started out to reform the old religion, he had his own inventions. They would claim that he changed the old religion, that he condemned some of the ancient practices that were believed by many to be good, and that he altered the character of the old religion.

By 1803, Handsome Lake’s teachings were bringing about a spiritual renaissance among the Iroquois. He continued to express the “good word” and to stress the need to keep the land instead of selling it. His spiritual movement became a new religion called the Code of Handsome Lake.

In 1804, a group of Seneca families under the leadership of Handsome Lake established a new village just north of Cornplanter’s grant in New York. In setting up the village, Handsome Lake explained that the homes must be close together in order to carry out the midwinter religious ceremonies.

By 1807, news of Handsome Lake’s vision had reached other nations. A delegation of Shawnee approached Handsome Lake and asked him to return with them to tell the people of his vision. He refused. Some historians feel that Handsome Lake’s refusal may have be predicated on his unfamiliarity with the Shawnee language.

In 1815 emissaries from the Onondaga Nation, one of the Six Nations of the Iroquois Confederacy, asked Handsome Lake to bring his message to their people. Shortly after this, Handsome Lake had a vision in which he was advised by three messengers that it was his duty to go to the Onondaga, but that he would meet four messengers who would lead him on the Sky Trail. The Seneca begged him not to go, but he set out for the Onondaga Nation anyway. Near Syracuse, New York, he became very ill and weak. On August 15, 1815, following his vision, he died.