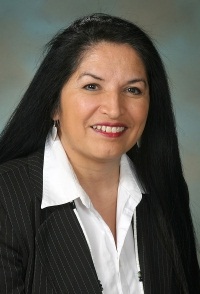 In 2005, INDN’s List was born and we hosted our First INDN Campaign Camp where we brought in a very distinguished group of Indian leaders from across the country to be trained by the top political consultants in the Democratic Party.  In that inaugural class was Claudia Kauffman, a member of the Nez Perce tribe, an extraordinarily talented individual who, with the support of INDN’s List made history by becoming the first American Indian woman elected to the Washington State Senate.

In her first term in office, Senator Kauffman has quickly made a huge impact and taken the lead on issues involving children and education.  As Vice Chair for Early Learning on the State Education Committee, Senator Kauffman brought together parents, professionals and policy makers to examine early learning needs statewide and develop a plan to expand early learning in Washington.  She authored and passed legislation that implemented this plan for all of Washington’s children.

This year, Senator Kauffman faces her first reelection campaign.  INDN’s List is proud to once again endorse Senator Kauffman for State Senate.  Republicans have targeted Senator Kauffman, making her their # 1 target, and are raising massive amounts of money to use against her.  They have even already started their dirty tricks, including a push poll, to defeat her.

Please take a moment to visit Claudia Kauffman’s website, learn more about her campaign, and make a donation to help her fight back against these dishonest attacks!

All donations prior to August 17th count as primary donations and not general election donations, so it is vital to donate now if you plan on making the maximum impact on her race.

Representative Jeff Morris, a member of the Tsimshian Indian Nation, is running for his eighth term in office.  He is currently the Speaker Pro Tempore of the Washington State House, the second highest officer of the chamber.  He is also the Chair of the Council of State Governments, West.  Jeff is being challenged by a Republican for reelection.

Representative John McCoy, a member of the Tulalip Tribe, is running for his fifth term in office.  He is current Chair of the House Technology, Energy and Communications Committee.  He is also Chair of the National Caucus of Native American State Legislators.  John is being challenged by a Republican for reelection.

In Washington State, all money raised prior to August 17th counts as a primary contribution and not a general election contribution.  This allows organizations, like INDN’s List, to “max out” to candidates before August 17th and then “max out” again after August 17th.

Please contribute now to help INDN’s List “max out” to our endorsed candidates twice, doubling our financial impact on their races!