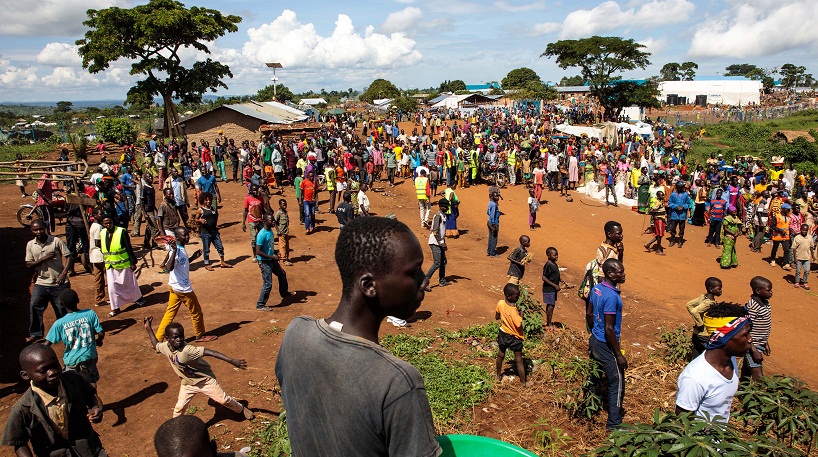 Julius Oyet is represented in the video.

Oyet is a self-designated Apostle and leader of the Lifeline Ministries. He has found favor with President Museveni for praying against areas of Northern Uganda once controlled by the rebel Lord’s Resistance Army. Oyet’s Born Again Federation in Uganda oversees over 10,000 churches and estimates 9 million Christians attend these churches.

Oyet promotes what is known as the “7 mountains strategy”; this is the belief that Christianity should advance in a society by taking control of seven domains:

To establish The Kingdom of God on the earth, we must claim and possess The Seven Mountains of Culture namely: Business, Government, Religion, Family, Media, Education and Entertainment.

“Alters, alters have been put up all over the place, where they made a covenant with the gods. The four major places, sites where these things can be found – to confirm it as an alter. The water spots, the forests, and then on the rocks; and fourthly, on the graveyards. Any time you get a pot with the drinking tubes, in one of four areas, it is a sign that that is an alter. A covenant was made there.” Superstition, idolatry, and witchcraft, have stood as the ever present partners – of these unspeakable horrors. They continue, to do so, today.

The video states, “but man has not pursued these dark deeds alone” after mentioning: cannibalism, the wars in Uganda, mutilation, and murder.  George Otis, Jr., the producer of the video, wants his audience to blame the atrocities and wars on alters residing on “the four major places” by deduction. Dehumanization precedes extermination, dehumanizing a people’s sacred sites and alters precedes cultural genocide. But to them, it’s possessing the culture of all religions “To establish The Kingdom of God on the earth.”

“We put our foot on Hawaii !”-video of GOP candidates at bizarre event

– during one of the most heavily covered American mid-term elections in history, a wave of politicians associated with a nakedly supremacist evangelical ministry whose leaders make statements ideologically reminiscent of the Spanish Inquisition or the Crusades,

Columbus’s first voyage in 1492 combined with his religious motivations for making it led Pope Alexander VI to issue a Papal Bull in 1493.

Pope Alexander VI ordered Ferdinand and Isabella to observe and to do the following:  that the primary purpose of all future voyages and ensuing discoveries of land and people was to Christianize and “overthrow” any Nations who resisted; that Columbus himself be used for the next voyage, since there was consensus among Columbus, Ferdinand, Isabella, and the Papacy with regards to spreading Christianity to the entire world; that the Indians might have been good converts; that all this was to be carried out “By the Authority of Almighty God;” that it applied to the entire world; that any possible Christian rulers were to not be overthrown; that Ferdinand and Isabella had power over such possible Christian rulers, while the Papacy had power over them and any possible Christian rulers; that overthrown Nations would have a Christian ruler put in place; that anyone who traded with anyone who overthrew a Christian ruler would be excommunicated; and that anyone who went against the Papal Bull would “Incur the wrath of Almighty God.”

Perhaps because in part because he didn’t want to” Incur the wrath of Almighty God,” and in addition to Columbus’s crimes against humanity, “he performed a ceremony to “take possession” of the land for the king and queen of Spain, acting under the international laws of Western Christendom.”

When Christopher Columbus first set foot on the white sands of Guanahani island, he performed a ceremony to “take possession” of the land for the king and queen of Spain, acting under the international laws of Western Christendom. Although the story of Columbus’ “discovery” has taken on mythological proportions in most of the Western world, few people are aware that his act of “possession” was based on a religious doctrine now known as the Doctrine of Discovery. Even fewer people realize that today –five centuries later– the United States government still uses this archaic Judeo-Christian doctrine to deny the rights of Native American Indians.

In 1823, the Christian Doctrine of Discovery was quietly adopted into U.S. law by the Supreme Court in the celebrated case, JOHNSON v. McINTOSH (8 Wheat., 543). Writing for the unanimous court, Chief Justice John Marshall observed that Christian European nations had assumed “ultimate dominion” over the lands of America during the Age of Discovery, and that–upon “discovery”–the Indians had lost “their rights to complete sovereignty, as independent nations,” and only retained a right of “occupancy” in their lands. In other words, Indian nations were subject to the ultimate authority of the first nation of Christendom to claim possession of a given region of Indian lands. [Johnson: 574; Wheaton: 270-1]

While the different nations of Europe respected the right of the natives, as occupants, they asserted the ultimate dominion to be in themselves; and claimed and exercised, as a consequence of this ultimate dominion, a power to grant the soil, while yet in possession of the natives. These grants have been understood by all, to convey a title to the grantees, subject only to the Indian right of occupancy.

The history of America, from its discovery to the present day, proves, we think, the universal recognition of these principles.

Spain did not rest her title solely on the grant of the Pope. Her discussions respecting boundary, with France, with Great Britain, and with the United States, all show that she placed in on the rights given by discovery. Portugal sustained her claim to the Brazils by the same title.

No one of the powers of Europe gave its full assent to this principle, more unequivocally than England. The documents upon this subject are ample and complete. So early as the year 1496, her monarch granted a commission to the Cabots, to discover countries then unknown to Christian people, and to take possession of them in the name of the king of England. Two years afterwards, Cabot proceeded on this voyage, and discovered the continent of North America, along which he sailed as far south as Virginia. To this discovery the English trace their title.

Christopher Columbus was discovered by Indians and since all it takes is “planting a cross and taking on the conquest and/or conversion of indigenous people” to steal a “New World” by genocide and then making that ideology Supreme Court law, then perhaps  John Cotton’s words from 1630 reflect the ignorance and sentiment of many fundamentalists today.

We now have conclusive evidence: In a legal brief filed in the case Tee Hit Ton, the United States government traced the origin of Indian title in U.S. law to the ideology that discovering Christian sovereigns had the right to take over and acquire the lands of “heathens and infidels.”

The United States responded to the Tee Hit Ton complaint by stating: “It is a well established principle of international law with respect to the lands of this continent [that] ‘discovery gave title to the government by whose subjects, or by whose authority, it was made, against all other European governments which title might be consummated by possession.’” Here the attorneys for the United States cited Johnson v. M’Intosh, from which they lifted the quoted language.

Here, then, is the smoking gun: the U.S. government’s legal brief in Tee Hit Ton. It is a gem of religious racism that fully documents the illegitimate foundation of U.S. Indian law and policy. The U.S. legal brief in Tee Hit Ton also demonstrates that this foundation of religious discrimination and racism was affirmed by the United States Supreme Court as recently as 1955, when the court ruled that the Tlingit lands were not their property, and that religiously racist backdrop continues to be invoked whenever the court cites the Doctrine of Discovery.

Most people probably – hopefully – agree that genocide is wrong; at the same time, though, few people are as willing to condemn genocide if it occurs in the context of killing the “enemies” of God.

from the appointment of the Lord?”

How many Christians and Jews read the stories of mass slaughter in the Old Testament and react with horror? How many instead make up excuses for why it was OK for the Israelites to kill off entire groups of human beings? Once you start making such excuses, though, it’s hard to stop and this creates problems for us today.

The answer is, and this is all one can hope to understand, is that there is no rational. There is irrational with economic motivation. For example, land is not valuable to the invaders in and of itself, but for the crops it might yield and the resources on it. But what about the “divine authorization” for genocide, or “the placing of a people in this or that country?”

One can neither prove nor disprove God as one learns from studying the ontological argument. So to, it is safe to say that those who have condoned genocide because they believe a supreme being authorized it believe in a supreme being, or God.  It is circular reasoning taken to the extreme, let me attempt to make an example of the irrational. “Doesn’t one commandment say ‘Thou Shalt Not Kill,’ then why is it permissible to exterminate a people? Because God commanded and authorized it, and who are you to question God?”

“In a little more than one hour, five or six hundred of these barbarians

were dismissed from a world that was burdened with them.”

“It may be demanded…Should not Christians have more mercy and

compassion? But…sometimes the Scripture declareth women and children must perish with their parents…. We had sufficient light from the word of God for our proceedings.”

Who were the invaders to “question their God?” It was much easier to dehumanize than question their “God” and risk eternal damnation.

When asked at the military inquiry why children had been killed, one of the soldiers quoted Chivington as saying, “NITS MAKE LICE.”

Allow me to wrap this up with some circular reasoning of my own. Since God and heaven can not be proved or disproved, then neither can hell. I would hope there is a hell, and I would hope it’s unbearable. Furthermore, I’d hope Mather, Chivington, Custer, Hitler and the like are in it.

I don’t believe in hell though, I believe in something akin to the First Law of Thermodynamics.

The lessons of Columbus, Mather, Chivington, Custer, Hitler and the like haven’t been learned, so they’ve been “merely changing from one form to another.”

“Time is on their side” so long as crimes against humanity continue to be condoned for economic reasons and it will continue as long as the Military Industrial Complex exists with Manifest Destiny being the stage and irrational. The different faces of butchers aren’t going to hell, nor are past ones in it, they’re yet with us as that engine of grief called fundamentalism fuels their irrationality and puts blood money in their bank accounts.

“The report is called ‘Open Secret: Illegal Detention and Torture’ by the Joint Anti-Terrorism Task Force in Uganda. It was published last year, April 8, 2009, and it says that the United States provided not only training, but also $5 million for Ugandan security agents to torture individuals detained in Uganda, which is illegal according to the Leahy Amendment, an amendment by Sen. Patrick Leahy, which prohibits U.S. cooperation or funding or training for any government that is torturing its individuals or committing human rights abuse.