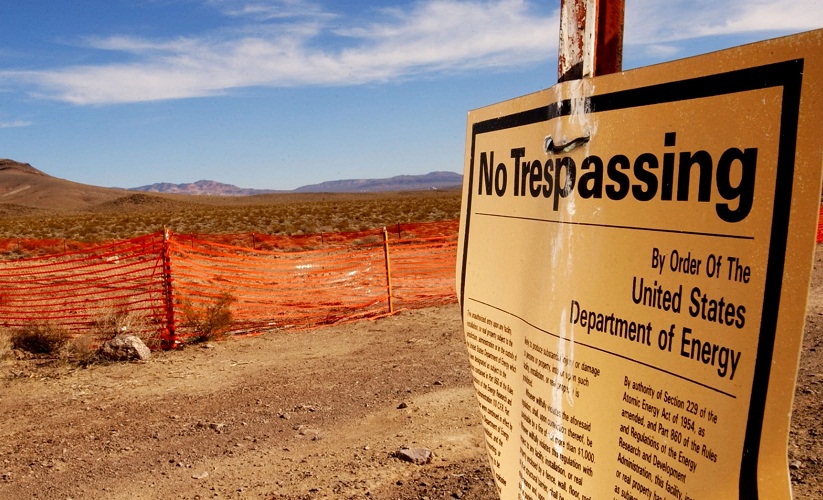 Discovery, conquest, abandonment and sale are the lawful methods for the US to acquire land. Treaties of cession are the most common lawful method of transferring land ownership from the original Native American owners to the US in exchange for protection, goods and monetary payments. Treaties are contracts that emanate from International Law and are a formal relationship between one government recognizing another with the intent of preserving the existence of each nation party to the agreement. This is why the US Constitution specifically authorizes that treaties, “shall be the supreme law of the land.”  Relations between the Western Shoshone Nation and the US by treaty have similar provisions yet is different in important ways that have lasting effect.

Westward expansion was booming with the discovery of gold after the signing of the 1848 Treaty of Guadalupe Hidalgo between the US and Mexico. In Article 11 of the treaty the US solemnly pledged, “…Special care shall then be taken not to place its Indian occupants under the necessity of seeking new homes”. The shortest route to the gold fields of the west was overland through Native American country while the fastest route was by steamship via Panama. During the 1850’s gold from the Sierra Nevada Mountains was transported to Panama, through the jungle by rail and on to the US Treasury in Washington. A steamship carrying tons of gold bullion was lost to the bottom of the sea in 1857 triggering a financial crisis across America that precipitated the need for an overland transportation route. When the Civil War began in 1860 gold was needed to finance the war against the Confederacy requiring a secure overland shipping route.

Congress passed the Nevada Organizing Act  in 1861 allowing for the organization of the Territory of Nevada, “provided, further, that nothing in this Act contained shall be construed to impair the rights of person or property now pertaining to the Indians in said Territory, so long as such rights shall remain unextinguished by treaty between the United States and such Indians, or to include any territory which, by treaty with any Indian tribe is not, without the consent of said tribe, to be included within the territorial limits or jurisdiction of any state or Territory.”  In 1863 the US and the Western Shoshone Nation signed the Treaty of Ruby Valley. Unlike other treaties with Native Americans, the Treaty of Ruby Valley did not have provision ceding land to the US. Rather, the US agreed to pay the Western Shoshone Nation $5,000 a year for twenty years for the specific interests sought including unobstructed travel routes. In 1869 the US Congress ratified the Treaty of Ruby Valley and President Ulysses S. Grant Proclaimed the treaty in recognition of the relationship with the Western Shoshone Nation that helped the US win the Civil War. Three years later the US ended making treaties with Native Americans because all interests across the continent had been secured, “provided, further, that nothing herein contained shall be construed to invalidate or impair the obligation of any treaty heretofore lawfully made and ratified with any such Indian nation or tribe.”  The US failed to make the required payments due under Article 7 of the Treaty of Ruby Valley. The Western Shoshone Nation views the US failure to make payments as an abandonment of the rights and interests sought by treaty and a return to the current state of being before the treaty – status quo ante.

Poor legal interpretations and discrimination are used to undermine Western Shoshone sovereignty and property rights. In 1823 Chief Justice John Marshal for the US Supreme Court held in the case, Johnson & Grahame’s Lessee v. M’Intosh that Native Americans held only occupancy and possession (aboriginal title) to their lands. According to Steve Newcomb, Director of the Indigenous Land Institute, “the ‘discovering’ Christian European government is understood to have dominion over the soil even before physical possession is taken and before any ‘Indian title’ has been extinguished. It became the view of some Europeans commentators that, if the lands in question were not ‘possessed by any Christian prince’ at the time of their supposed ‘discovery’ then, according to the international law customary to Christendom, the Christian sovereign prince was understood, from the perspective of Christendom, to automatically obtain “sovereignty” and ‘dominion’ over the soil inhabited and possessed by non-Christians (or what US Supreme Court Chief Justice Marshall referred to in the Johnson ruling as heathens).”   Chief Justice Marshall violated the supposed separation of church and state, as well as, the First Amendment to the US Constitution guarantees the free exercise of religion. The Western Shoshone people are being penalized and persecuted to this day by the US for their lack of belief in Christianity. The Supreme Court ruled and the President and Congress violate the basic human rights of the Western Shoshone people with impunity.

Collaborating with researchers from Marsh Institute at Clarke University, funded by the Center for Disease Control and the National Institute of Environmental Health Sciences, the Nuclear Risk Management for Native Communities project reviewed the Department of Energy, Off-site Radiation Exposure Review Program. What they found was that the Department of Energy study used a shepherd lifestyle to model Native Americans, but that the shepherd lifestyle did not accurately replicate the Western Shoshone or Southern Paiute people’s lifestyle. Based upon lifestyle differences alone the Nuclear Risk Management for Native Communities project found that Western Shoshone and Southern Paiute people were exposed to radiation through unique exposure pathways that included diet, shelter and mobility. Radiation exposure risk for adults are as much as 15 times greater than non-Native American communities downwind, as much as 30 times greater risk for children, and as much as 60 time greater risk for inutero exposure.

A key point to know is that the Department of Energy and the Nuclear Regulatory Commission worked together to establish guidelines and site selection criterion for a repository prior to 1980. Late in the site selection process the Department of Energy threw in the Yucca Mountain site because contractors at the Nevada Test Site were looking for new programs and realized that a nuclear waste repository would be needed, be very expensive and take a long time. Most of the language has changed and now the site relies almost entirely on engineered barriers rather than natural barriers. The Department of Energy has spent billions of dollars trying to make the Yucca Mountain site not look as bad as it is. The result of those expenditures is the Total Performance System model. The Total Performance System model involves the whole interaction of engineered barriers and natural barriers to achieve the goal of waste isolation.

The important difference between Yucca Mountain and the earlier sites considered is that the planned repository is in the biosphere, 900 feet from the top of Yucca Mountain and 400 feet above the water table, in heavily fractured rock called welded tuff. Though it looks dry, the rock at Yucca Mountain is 90 percent saturated with 10 percent water held within the pores of the rock. When hot nuclear waste is emplaced in the mountain, the rock shatters releasing the water that turns to vapor that can carry radiation to the surface along earthquake faults. Another scenario is that the vapor will condense into water when the waste cools and will flow back into the repository and carry the waste to the water table contaminating the groundwater. Once in the groundwater the radiation will be transported to surface spring locations. A large amount of nuclear waste placed in one location could combine to become a critical mass as it emerges to the surface poisoning the land and people living there in the future.

The Western Shoshone Nation is being destroyed through US development of Yucca Mountain as a nuclear waste repository. The Western Shoshone people view the world holistically, considering the political, social, cultural, economic impact and moral wisdom of storing nuclear waste at Yucca Mountain. Unable to answer questions about safety within the context that Western Shoshone were asking them, the Department of Energy only considered Western Shoshone society through the narrow view of cultural resources studies. The process used by the Department of Energy, “cultural triage” that is defined as, “the forced choice situation in which an ethnic group is faced with the decision to rank in importance equally valued cultural resources that could be affected by a proposed development project.”   So, the Department of Energy researchers reframed the question in a form science could answer, “Is this burial, plant or animal safe from a road, tunnel or building needed for a repository at Yucca Mountain?”  The answer was returned as the answer to the original question being asked by the Western Shoshone people. The Western Shoshone National Council view the use of “cultural triage” and every proximate act, in furtherance of, and as a means to dismantle a living culture for the benefit and profit of the nuclear industry, a violation of International Humanitarian Law, and a crime under the UN Convention on Prevention and Punishment of the Crime of Genocide and the US enactments, the Proxmire Act.

The Timbisha Shoshone Tribe in Death Valley, California petitioned the Secretary of Interior in 1998 to be designated an “affected Indian tribe” under provisions of the Nuclear Waste Policy Act.  After 9 years, the Department of the Interior certified the Timbisha Shoshone Tribe as “affected” and eligible for financial assistance to conduct independent oversight, monitoring, impact assessment and to prepare for licensing proceedings at the Nuclear Regulatory Commission. Yet, another year has passed without funding to the Timbisha Shoshone Tribe while the Department of Energy spends hundreds of millions of dollars at Yucca Mountain, conduct viewed by most Western Shoshone as environmental racism.

The Yucca Mountain project is alive and moving forward in licensing proceeding before the Nuclear Regulatory Commission Atomic Safety Licensing Board. However, the process is far from over. The next president of the US will have to set an appropriate budget for nuclear waste storage. The president’s budget may include increased funding for Yucca Mountain site activities, flat funding, or reduced funding. Reduced funding is one way the Yucca Mountain project may be ended if the president deems that the site is not suitable or unsafe. Also, the Congress can amend or repeal the Nuclear Waste Policy Act to consider other options than Yucca Mountain.

Progress is being made as the Western Shoshone Nation endures. The Timbisha Shoshone Tribe continues to press for full meaningful involvement and funding to adequately prepare contentions before the Nuclear Regulatory Commission at Yucca Mountain. The Western Shoshone National Council has an obligation to protect Newe Sogobia and formally protests US oppression and abuses in international forums. In 2003 the Inter-American Commission on Human Rights of the Organization of American States found that the US violated the human rights of the Western Shoshone under the American Declaration of the Rights of Man, by denying the right to due process, to equality before the law, the right to a fair trial, and the right to property, in connection with determinations and protection of Western Shoshone property rights in their ancestral lands. At the United Nations Commission on Human Rights in Geneva the Committee on Elimination of Racial Discrimination in 2006 urged the US to: a) Freeze any plan to privatize Western Shoshone ancestral lands for transfer to multinational extractive industries and energy developers; b) Desist from all activities planned and/or conducted on the ancestral lands of the Western Shoshone or in relation to their natural resources, which are being carried out without consultation with and despite protests