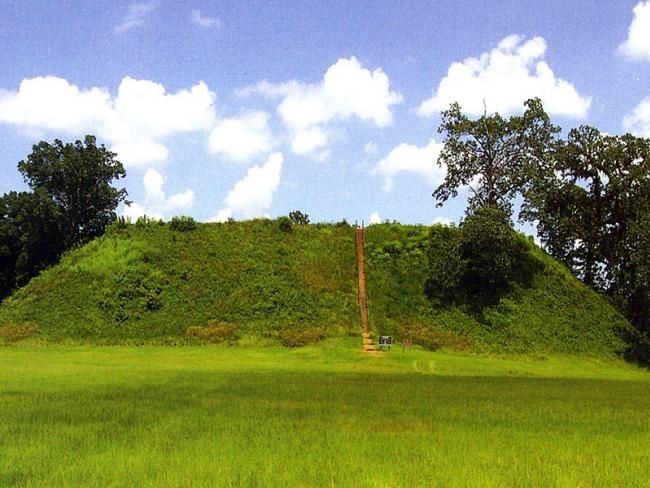 More than a thousand years before the first Europeans arrived in North America, American Indians had developed complex civilizations which were characterized by the large earthen pyramids (usually called mounds) which were constructed throughout the southeast. Many of these mound complexes are found in the present-day state of Georgia. Among them is Kolomoki (also called Mercier mounds).

The village of Kolomoki was founded about 350 CE. From its humble beginnings, the village eventually contained nine mounds, the largest of which (designated as Mound A) rose some 17 meters (56 feet) in height. Unlike other large mound sites in the eastern United States, Kolomoki is not located near a major stream.

Kolomoki was a ceremonial center with burial mounds and a central plaza which was the center of population for numerous surrounding villages The site was laid out on a central east-west axis, with mounds at either end and a central plaza and adjoining ritual area at the center. This axis was bisected by a large, ring-shaped discontinuous earthen enclosure. The orientation of the mounds is such that they marked celestial events, including the spring equinox and the summer solstice.

Houses were built along the edges of the enclosure. The typical household consisted of a pair of winter and summer structures. These structures were quite small (100 square meters). The permanent population was about 225 which increased to 525 at certain times of the year.

Mound A (also called the Temple Mound) would have required more than 2 million basket loads of earth.

Two small dome-shaped burial mounds (designated as E and K) were constructed at opposite ends of the site marking the east-west axis. They were more than a kilometer apart and were linked by a large oval enclosure. Ritual activities were conducted at a point midway between these two mounds.

Mound E was about 80 feet in diameter and 11 feet high. The construction of this mound began with a rectangular pit (6 feet by 9 feet) which contained cremated human remains of a single individual. Other burials were later added and Mound E became a corporate burial facility. It probably served to reinforce group membership.

Mound K was originally 55 feet in diameter and about 5 feet high.

A century after the founding of Kolomoki, there were seven other major mound sites in Georgia:

Marksville: eight mounds with an enclosure

Greenhouse: seven mounds with a large plaza and a low ridge earthwork

Baytown: nine mounds with a plaza

In general, these mound complexes served as ceremonial centers and thus did not have a substantial permanent population. The exception was Kolomoki. At this time, Kolomoki was one of the largest and most densely populated communities north of Mexico.

By 450 CE, Kolomoki was maintaining its permanent population of about 225, but it was drawing in more people from the outlying areas for construction projects and ceremonies. The population may have been as high as 2,000 at one time. There was increased mound construction at the site which emphasized the central east-west axis of the site. In terms of mound construction, Kolomoki at this time had eclipsed all other settlements in the immediate area.

Mound D contained 77 burials and had a pottery cache on its east side. Burial objects included iron and copper artifacts, as well as pearl beads. In the burials, the bodies were placed facing east. The pottery included effigy pots which included the shapes of deer, quail, and owls.

The subsistence pattern at this time was based on gathering wild plants and hunting. Farming supplemented these activities.

Two centuries after it began, Kolomoki entered into the period which archaeologists call Phase III. While there were subtle changes in ceramics during this period, the settlement pattern remained the same. During this time Mound B (50 feet in diameter and less than 5 feet high) and Mound C (similar to Mound B) were added on a north-south axis on either side of Mound A. Mound A has a base that measures 325 feet by 200 feet. The southern half of the rectangular summit was about 3 feet higher than the northern half.

After more than four centuries, about 750 CE, Indian people stopped using Kolomoki as a ceremonial center.

At the present time Kolomoki Mounds Historic Park is operated by the Georgia Department of Natural Resources. According to the park’s website:

The park’s museum is built around an excavated mound, providing an unusual setting for learning who these people were and how they lived. Inside, visitors will find numerous artifacts and a film. Outdoor activities include camping, fishing, picnicking and boating. Hikers can choose from two scenic trails. The Spruce Pine Trail offers views of lakes Yahola and Kolomoki, while the Trillium Trail meanders through hardwoods and pines.