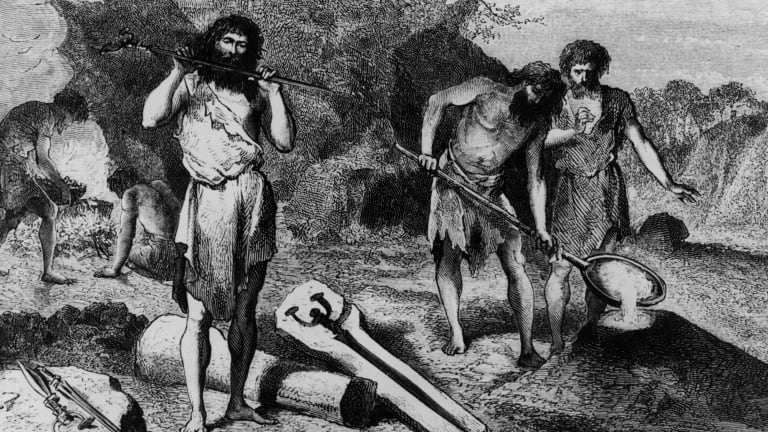 Four thousand years ago, the Bronze Age was just beginning in Europe and in China. Palace civilizations were beginning in the Aegean. The chariot had emerged as a war vehicle in the Near East, in Egypt, and in parts of Eastern Europe. By 4,000 years ago, American Indians had occupied North America many millennia and had developed adaptations to the many ecological zones within the region.

By 4,000 years ago there was a major trade network which was bringing beads and ornaments from southern and central California into eastern California, Nevada, and Utah.

Near the present-day city of Berkeley, CA, Indian people were supporting themselves by collecting mussels and oysters as well as fish. In addition, they were gathering some plant foods and were doing some hunting.

Indian people on San Nicholas Island had a generalized maritime economy which was largely dependent on mollusks.

At Little Harbor on Catalina Island, Indian people were living on fish, mollusks, and sea mammals.

On the northern part of the Pacific Coast in what is now Alaska, British Columbia, and Washington, the coastal peoples were using antler wedges for splitting cedar boards.

In Oregon, Indian people were now occupying the Avenue site near present-day Seaside.

Indian people in Nevada were weaving sandals and basketry. They were also making small split-twig figurines of deer and mountain sheep. In the area of the Lovelock and Humboldt Caves, Indian people were also specializing in using lake resources. They were making nets and fishhooks.

In Indiana, Indian people established a kitchen in the present-day Charlestown State Park for processing nuts so that they could be stored for winter use. The Indians collected hickory nuts, used large slabs of rock to crush them and then made fires to boil them and extract fatty oils.

In Illinois, Indian people were using the Koster site as a camping site while deer hunting. Archaeologists identify these people as a part of the Titterington culture which centered near St. Louis, Missouri.

In Illinois, Indian people had started raising sumpweed and chenopod for food.

By 4,000 years ago, the cultivation of maize (corn) was diffusing from its hearth in Mexico in the Southwest.

The Cochise Archaic Culture moved into the Southwest from Mexico about 4,000 years ago. One of the characteristic traits of their culture was their basketry which was made using coiled bundles of beargrass or yucca fiber which was then sewn together with the same materials.

In Arizona, some Cochise Culture people camped along Cienega Creek on the present-day San Carlos Apache Reservation. They dug holes to obtain water.

In Arizona, Indian people at the Clearwater site near present-day Tucson were raising corn.

In Arizona, Indian people were placing miniature figures in caves in the walls of the Grand Canyon. The caves are difficult to reach because the sheer precipices lack handholds and footholds. These figures were made by bending and folding a single willow twig. Most of the figures seem to represent deer or bighorn sheep; others may represent antelope. The figures may have been made for use in hunting medicine. With regard to the placement of the figures within the caves, the objects were generally placed under flat rocks or small cairns. No  accompanying relics or offerings have been found by archaeologists.

In Colorado, Indian people established a residential site south of the present-day city of Denver. They built six pit houses which were covered with brush and hides. The people who occupied the site were using a projectile point which archaeologists call the McKean style. This projectile point has a stem with an indented base.

In Georgia, Indian people living on the south coast were now making a low-fired pottery which was tempered with Spanish moss or palmetto. Archaeologists call this Orange Pottery.

On the coastal islands of Georgia and South Carolina, Indian people constructed about 20 large shell rings. The largest of these, built on Sapelo Island, Georgia, is more than 300 feet across and forms a circular embankment about 7 feet high. It is assumed that the construction and use of these shell rings was ceremonial.

In North Carolina, Indian people were using the Gaston site. They were using broad-bladed projectile points and soapstone bowls.

In Florida, Indian people at the Summer Haven site constructed four circular structures. The people who occupied this site were practicing cranial deformation (a deliberate modification of head shape which begins by binding the head of an infant shortly after birth).

In south Florida, Indian people are living on Useppa Island in the Pine Island Sound. They are making fiber-tempered pottery.

Along the Savannah River near Augusta, Georgia, Indian people at Stalling’s Island began making decorated pottery about 4,000 years ago. The pottery was in the form of open bowls with the walls decorated with incised lines and punched indentations. The pottery was fiber-tempered, which means that fibers – grass, roots, Spanish moss – were placed in the clay to strengthen it for firing.

Archaeologists divide the Stalling’s Island vessel forms into three types: a shallow, wide-mouthed basin with a flat to semi-flat base; a small, slightly restricted-mouth basin; and an unrestricted bowl form with a rounded base. The shallow profile and wide orifice of the first type of vessel forms made it easy to transfer warm or hot material from one container to another. In addition, the flat bottoms effectively radiated heat upward.

About 4,000 years ago, the Indian population increased along the Weiser, Payette, and Boise Rivers in present-day Idaho.

In Idaho, Indian people began using Dagger Falls on the Middle Fork of the Salmon River as a salmon spearing station.

In Idaho, Indian people began using Scaredy Cat Cave as a natural meat locker. Bison meat was stored with the ice in the cave and then later dislodged from the ice when needed.

In British Columbia, Indian people established a village at Keatley Creek on the Fraser River near Lillooet. The village consisted of 112 pit houses.

In Montana, Indian people at the Rattlesnake Point Site were utilizing tipis. They were using tools associated with the McKean Complex.

In the northeast, Inuit people from Greenland migrated to Canada carrying with them a technology that included microblades and unusually small chipped blades (termed “Artic Small Tool Tradition” by archaeologists).

In Massachusetts, Indian people were exploiting the shellfish resources on Martha’s Vineyard.