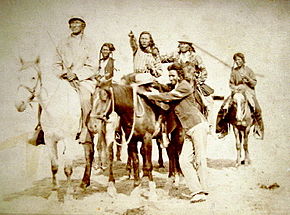 When the first American explorers and fur traders began to move out onto the Northern Plains following the Corps of Discovery (i.e. Lewis and Clark) in the early nineteenth century, they encountered the tribe they came to call the Crow hunting in Montana and Wyoming. At this time, the Crow were horse-mounted buffalo hunters with a good understanding of the ecology of the country. However, like many of the other Indian tribes living on the Northern Plains at this time, this had not always been true. Oral traditions, linguistics, and archaeological data all suggest that the Crow began their migration onto the Northern Plains about three centuries earlier.

According to oral traditions, in the 1500s the Crow ancestral tribe was living east of the Mississippi River in a land of forests and lakes. Some Crow elders feel that this was probably present-day Wisconsin. At this time, their subsistence was probably based on a combination of hunting forest animals such as deer, elk, and moose; fishing; gathering wild plants; and planting some crops, including corn. At this time, they were not living in the Plains Indian tipis, but in woodlands wigwams: domed shaped structures covered with bark.

For some reason, they migrated to the west and settled along the Missouri River in North Dakota. Here they settled into a more agricultural way of life, raising corn, beans, sunflowers, tobacco, pumpkins, and squash in small, irregularly shaped fields. They adopted the more permanent earth lodge house common to the tribes along the river. From here, the ancestors of the Crow broke off from the ancestral tribe, moving onto the plains to become more dependent on the buffalo for their subsistence.

Linguistically, the Crow are a Siouan-speaking group which is most closely related to the Hidatsa. The linguistic data suggests that the Crow separated from the Hidatsa in the late 1500s.

According to one oral tradition, there was a buffalo hunt at which the wives of two of the chiefs argued over the upper stomach of one of the cows. There was a scuffle and one of the women was killed. This escalated into a skirmish between the two bands led by the chiefs, and several more people were killed. As a result, one band left the Missouri and migrated to the Rocky Mountains. The band that followed along the rivers and streams came to be known as the River Crow (They Travel Along the Riverbanks) and the other band became known as the Mountain Crow. The Mountain Crow later divided with part becoming the Kicked in the Bellies.

Another oral tradition tells that at one time there was a wandering tribe under the leadership of two brothers: No Intestines and Red Scout. At what is now called Devil’s Lake, they did a vision quest together. During the vision, No Intestines was told to search for the seeds of the sacred tobacco and Red Scout was told to settle on the banks of the Missouri River and grow corn. No Intestines led his people to many parts of the Great Plains in search of the sacred tobacco seeds. The oral tradition tells of the Great Salt Lake, the geothermal features of Yellowstone National Park, of the Arkansas River in Oklahoma, and of the plains of Alberta, Canada. Finally, at Cloud Peak, the highest crest in the Bighorn Range, No Intestines received another vision and thus the Crow made their home in Montana and Wyoming with the Bighorn Mountains as their heartland.

The oral traditions also tell of another group of Crow-Bilápiiuutche, Beaver Dries Its Fur-which became lost during the journey. Several explanations are offered for the fate of this group. Some feel that it split in Canada and remained there. Others say it turned east and ended up at Lake Michigan. Still others feel that Beaver Dries Its Fur became a part of the Kiowa, who were closely associated with the Crow. According to some oral traditions the Comanches located a group of massacred people in southern Colorado who were dressed like Crows.

Like the other tribes of the Northern Plains, they did not receive horses until sometime in the 1700s, perhaps about 1750. It is likely that they first acquired horses from the Shoshone.

Indian Territory: All Tribes Experienced Their Trail of Tears