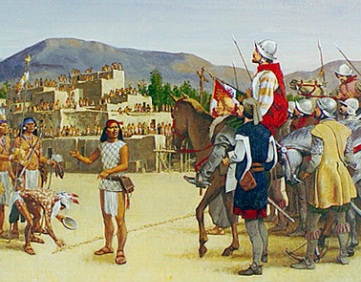 During the sixteenth century, the Spanish began their invasion and conquest of New Mexico. The Indian people they encountered lived in large villages with two- and three-story homes made from adobe and stone. In 1539, the people of Acoma pueblo (village) had their first recorded contact with the Spanish.

The name Acoma comes from Akome which means “people of the white rock.” The village sits on top of a 400-foot-high mesa and by 1539 Acoma had been continuously inhabited for more then five centuries.

The Acoma language belongs to the Keresan language family and is most closely related to Laguna and more distantly related to Cochiti, San Felipe, Santa Ana, Santo Domingo, and Zia.

The Spanish invasion involved two distinct activities. First came the early explorers looking for wealth in the form of gold similar to what had been found in Mexico. Under the European Doctrine of Discovery, these explorers felt able to claim Indian lands for Spain as European law allowed Christian nations to rule all non-Christian nations. The explorers passed through Indian lands, taking from the villages supplies and slaves.

While the explorers were a temporary invasion, Spanish colonization brought in people who intended to stay, to take Indian land and farm it with Indian slaves.

Accompanying both the explorers and the colonists were the missionaries from the Catholic Dominican order who felt compelled to destroy the Indian religions—religions that they felt involved the worship of Satan—and require the Indians to assume the dress, beliefs, and customs of Catholic Spain. The missionaries were offended by what they viewed as the indecent dress and power of Native women.

The Spanish entrada or invasion of the Southwest began in 1539 when Fray Marcos de Niza, a Franciscan adept in native languages, received permission to explore the southwest and to determine if the fabled riches of the mythical Cities of Cibola actually existed. The expedition journeyed north through the Mexican state of Sonora and then into what would become Arizona and New Mexico. Near the pueblo of Zuñi the expedition turned back after Fray Marco took possession of Cibola for the Spanish king by erecting a pile of stones with a small cross on top. While Fray Marcos did not reach Acoma Pueblo, his African servant (slave), Estevan, probably did. Estavan describes Acus (Acoma) as independent kingdom and calls its people encaconados, indicating that they wore turquoise.

The following year, Francisco Vásquez de Coronado began his journey north from Mexico seeking the Seven Cities of Cibola described by Fray Marcos. He took with him a force of 330 Spaniards (most of whom were mounted soldiers) and 1,000 native allies. The expedition starts with 552 horses and 2 mares. The seven cities proved to be six Zuñi villages: Hawiku, Kianawa, Kwakina, Halona, Matsaki, and Kiakima.

Traveling east from Zuñi, the Spanish forces under the leadership of Captain Hernando de Alvarado encountered the pueblo of Acoma. This town, built on top of a mesa, was described by the Spanish as a fortress. The Spanish refer to the pueblo as Acuco. According to Alvarado:

“These people were robbers, feared by the whole country round about. The village was very strong because it was up on a rock out of reach, having steep steps in every direction.”

Alvarado described the entry as having a broad stairway with 200 steps, then a series of 100 narrower steps, and finally a climb with handholds. According to Alvarado:

“There was a wall of large and small stones at the top, which they could roll down without showing themselves, so that no army could possibly be strong enough to capture the village. On top they had room to sow and store a large amount of corn, and cisterns to collect snow and water.”

In her entry on Acoma in the Handbook of North American Indians, Velma Garcia-Mason describes the pueblo in 1540:

“…a village of about 200 men, situated on an almost inaccessible mesa about 400 feet high, with cisterns at the summit, evidence of woven cotton, deerskin, buffalo-hide garments, corn, domesticated turkeys and turquoise jewelry.”

In 1581, Fray Augustin Rodrígues and Francisco Sánchez Chuamuscado along with 28 others, including 12 soldiers, 3 friars, and Indian servants, enter into Pueblo territory looking for minerals to mine and women and children who can be enslaved to work as translators. The Spanish visited Acoma Pueblo which was described as having 500 houses of three to four stories. The Spanish traded merchandise for food.

“These people have their fields two leagues from the pueblo on a river of medium size, whose waters they intercept for irrigation purposes, as they water their fields with many partitions of the water near this river, in a marsh.”

While at Acoma, Espejo observed some Native ceremonies, including a snake dance.

“…he claimed it was necessary to force submission and obedience of the natives.”

Spanish colonists arrived in Pueblo country in 1598 when Juan de Oñate led a large colonizing party—129 soldiers and their families, 15 Franciscan missionaries, 83 wagons, 7,000 cattle, sheep, and goats—into New Mexico and established a colony at San Juan in the upper Rio Grande valley. The Spanish brought with them nearly1,500 head of horses and mules: 1007 horses, 237 mares, 137 colts, and 91 mules.

Meeting with leaders from 30 pueblos, Oñate took formal possession of New Mexico for the Spanish and ignored any possible Indian ownership of the land. In his book Pages from Hopi History, Harry James writes:

“Without any consideration of the Indians living in the area, he took possession of their lands in the name of the King of Spain and for the benefit of any of the Spanish colonists with him who might want to exploit them.”

Fifteen Franciscan missionaries accompanied Oñate for the purpose of converting the Indians to their perception of Christianity. In their article in American Antiquity, Katherine Spielmann, Jeannette Mobley-Tanaka, and James Potter report:

“Regardless of where they were stationed, Franciscan missionaries sought to replace Pueblo religious beliefs with Catholicism, and to undermine the influence of Pueblo religious leaders. Indians were punished for failing to attend services and for participation in native ceremonies.”

At Acoma, the warrior Zutacapan had heard about the Spanish intent to force submission and obedience and he warned the people about it. He immediately assembled a band of warriors to defend the pueblo. However, his son, Zutancalpo, told the people about the widespread belief that the Spanish soldiers were immortal. Upon hearing this, Chumapo, an Acoma elder, decided to disarm the warriors to prevent war and bloodshed.

When Oñate reached Acoma on October 27, 1598, he was greeted cordially and presented with gifts of corn and turkey. He demanded that Acoma submit to Spanish authority. Zutacapan led Oñate to the kiva (an underground ceremonial room) where sacred oaths are made. Velma Garcia-Mason reports:

“The appearance of the roof-laddered hatchway into the religious chambers of silent darkness frightened Oñate, and he refused the honor. With inadequate communication and fear of the unknown, he had suspicions that the Acoma warriors were plotting his death, so he left with his army.”

Shortly after Oñate left Acoma, Gaspar de Villagrá arrived looking for him. Villagrá had only his horse and his dog with him, and while he was offered food and water, he refused to dismount and set out after Oñate. In need of provisions, he soon turned back and met with Zutacapan who asked him if more Spanish soldiers were coming. Villagrá informed him that there were 103 well-armed Spanish soldiers just two days away.

On December 1, 1598, Captain Don Juan de Zaldívar and 31 Spanish soldiers stopped at Acoma to obtain provisions. The Spanish had hatchets and other tools to trade for corn and blankets. When the Spanish decided that the Indians were bringing the supplies unwillingly and too slowly, Zaldívar and 16 men climbed the mesa to the village. There, they took two turkeys (birds which are sacred to the people of Acoma) and raped at least one woman. The Acoma warriors then attacked and killed Zaldívar and 12 of his men.

When word of the battle reached Oñate, he consulted with the Dominican friars who told him that the purpose of war was to establish peace. Oñate concluded that not only must the deaths of the Spanish soldiers be revenged, but that Acoma must be made an example for the other pueblos.

In January 1799, 70 Spanish soldiers under the leadership of Vicente de Zaldívar set out to revenge the death of Juan de Zaldívar and other Spanish soldiers who were killed at Acoma pueblo. The battle between the Spanish and the Acoma lasted for three days. Twelve Spanish soldiers climbed to the summit of the mesa unnoticed by the Acoma guards. They drug a cannon through the streets, destroying the adobe walls of the houses with cannon balls and burning the houses. Feeling that they had been defeated by a supernatural power, the Acoma surrendered.

“Of the approximately 6,000 population, 800 were killed. Zaldívar carried away eight Acoma girls to Mexico.”

“What was called personal service was really slavery, and the Indians were distributed among government officials and missions.”

Two visiting Hopi men, whose villages are to the west of Acoma, had one hand cut off so that others among their people would understand what happens to those who do not submit to Spain.

The Zuni and the Spanish in the 16th Century