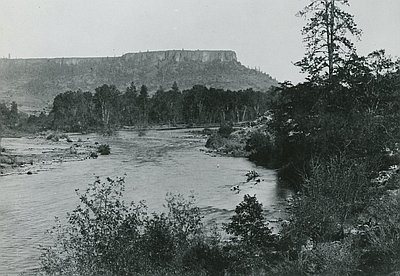 Conflicts between the Americans and the Indians along the Rogue River in southern Oregon began in 1850 when gold miners from California trespassed into Takelma territory. The Indians attacked the miners and plundered their camp. Seeing no value in the gold dust stored in several pouches, the Indians poured the dust into the river and kept the more valuable pouches. As a result of this attack, Governor Joseph Lane held a treaty council with the Indians. For the next six years, there were numerous skirmishes between the Americans, often volunteer militia units determined to kill Indians, and several Indian tribes who were attempting to defend their homelands.

In his book Uncertain Encounters: Indians and Whites at Peace and War in Southern Oregon, 1820s-1860s, Nathan Douthit writes:

“The Rogue River War was the first of the Indian wars of the western United States. For the Indians, it was a bitter defeat, followed by a bitter process of removal.”

Scattered Indian families remained hiding in the hills following the Rogue River War. The Bureau of Indian Affairs contracted with bounty hunters to capture them. In his book Land of the Umpqua: A History of Douglas County, Oregon, Stephen Beckham reports:

Following a philosophical policy regarding Indians that had led to the removal of Indian nations from the eastern United States, the government sought to remove the Oregon Indians from their homelands when non-Indians desired the land for farming or mining. The government was generally blind to any cultural, linguistic, and historical differences between tribes. As far as the government was concerned, all Indians were the same and the government viewed them as a single racial group rather than distinct ethnic or tribal groups.

In 1857, the army began the forced removal of all Indians from southern Oregon. The army escorted 325 friendly Indians from the Table Rock Reserve to the newly designated Grand Ronde Reservation on the Yamhill River in the upper Willamette Valley 263 miles away. The Indians walked for 33 days in cold, wet, wintry weather. The removed Indians included the Takelma under the leadership of Chief Sam. The army declined to provide the removal party with an escort to protect the Indians as they moved through American settlements even though the residents of these communities were unfriendly towards Indians.

“The bands that arrived at Grand Ronde were culturally and socially similar to each other, but variations in these broad cultural patterns and in historical experience gave each band a unique heritage.”

Originally, the reservation included 59,000 acres, but in 1901 the federal government reduced it to 33,000 acres, selling off the remainder to non-Indians as “surplus” lands. In 1954, the reservation and the Confederated Tribes of the Grand Ronde were terminated. In 1983, Congress passed the Grand Ronde Restoration Act restoring federal recognition of the tribes. In 1988, Congress transferred 9,800 acres of federal lands (mostly from the Bureau of Land Management) to the tribes for the creation of the Grand Ronde Reservation.

The Early Years of the Coast or Siletz Reservation