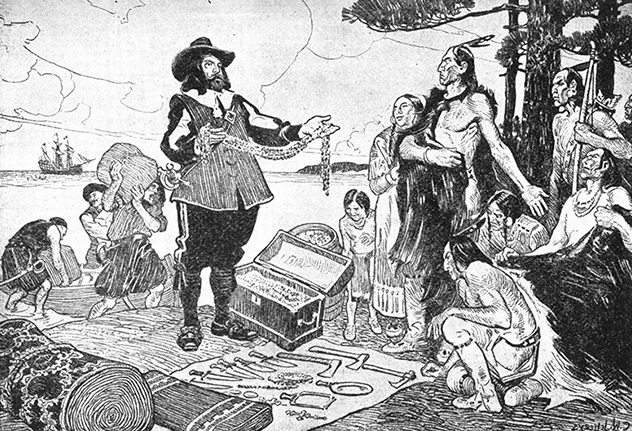 At the beginning of the eighteenth century, Indian nations were interacting with many European nations which had invaded the Americas and had claimed for themselves Indian land. These European nations included England, France, Spain, Holland, and Sweden. The century was characterized by European exploration to establish their ownership claims and to search for riches, the establishment of European colonies, and the fur trade.

“In the eighteenth century the French had four main aims in their thrust into the Far West: to discover new supplies of furs; to find new tribes to proselytize the faith of the Church of Rome, a motive that was considerably diminished as the century wore on; to penetrate and dominate the Spanish commercial empire by land; and to be the first to discover the inland sea that would lead to the Pacific.”

The French King, based on the travels and explorations of La Salle (Rene Robert Cavelier, Sieur de la Salle), claimed ownership of all lands south of the Illinois River between the English colonies on the east and the Spanish territory to the west.

Tattooed Serpent, a Natchez noble and war chief in Mississippi, befriended Antoine Le Page du Pratz, a French architect-engineer. Du Pratz later described the Natchez village, its mounds, and its dwellings. Tattooed Serpent lived in a 30 by 20 foot house built on top of a 10 foot high mound which was in the center of the village. To the south was a ceremonial plaza and the Sun Temple which was on top of another mound.

In Louisiana, the Chitimacha and the French established peace after more than a decade of war.

In Quebec, the King of France granted the Sulpician monastery rights to land with the understanding that they would use it as a mission for the Mohawk.

Among the southern English colonies, a number of statutes were passed dealing with Indians, both the independent tribes and individual Indians. With regard to the tribes, Yasuhide Kawashima, in an article in The Indian Historian, writes:

“The authorities, who considered the friendship of the Indians vital to the colonial security and welfare, endeavored to maintain good relations with them, through two specific policies concerning land use and trade.”

With regard to individual Indians and the legal system, Indians were generally not allowed to testify or be admitted as a witness against any Christian non-Indian.

English colonial authorities were aware of the great importance of the Indian tribes and individual Indians. In an article in The Indian Historian, Yasuhide Kawashima reports:

“No matter how valuable and useful the Indians might have been to the colonists as allies, dependent tribes, and servants and slaves, however, they were never considered as equal to the white settlers.”

Indians were not citizens, nor could they become citizens and from the viewpoint of the English colonists, they were aliens.

In South Carolina, the Yamasee War with the English colonists ended with a peace accord between the colonists and the Indian nations. As a result of this war, many colonists began to question the wisdom of capturing and using Indian slaves. In her book Slavery in Indian Country: The Changing Face of Captivity in Early America, Christina Snyder writes:

“After the Yamasee War, they increasingly turned to African labor, despite the fact that Africans cost more and were taxed at higher rates than Indian slaves.”

In Massachusetts, the legislature passed a law which required that contracts with Indians have the approval of two local justices of the peace. The law sought to prevent Indians from being forced into servitude when English settlers forced them into unreasonable debts. These actions were often preceded by the consumption of alcohol so that the Indians were drunk when they signed the contracts.

The Spanish missionary program was designed to bring about the total conversion of the Indians: to change them from pagans into Christians and from Indians into tax-paying Spanish citizens. By law this process was to take ten years and was to involve four stages: (1) misión (mission) which was to include initial contact and the explanation of the importance of God and the King, (2) reducción (reduction) which was to reduce the Indians’ territory by bringing them into a segregated community centered around a church, (3) doctrina (doctrine) in which the Indians would receive instructions on the finer points of Christianity, and (4) curato (curacy) in which the Indians would become tax-paying citizens.

In Texas, the Franciscans moved their mission from Eagle Pass to San Antonio where it became known as San Antonio de Valero.

In Texas, the Lipan Apache attacked the Spanish settlement of San Antonio.

In Texas, an unidentified disease struck the Caddo killing more than 100 newborn infants.

On the Southern Plains, the Comanche, mounted on horses and armed with guns, defeated the Plains Apache. In an entry in the Encyclopedia of North American Indians, Henry Dobyns reports:

“About that time, Wichitas and Pawnees forced Paloma Apaches to flee their homeland north of the Platte River to the middle Arkansas River.”

In Louisiana, the Houma moved their village from Angola to the headwaters of Bayou Lafourche. They established two villages on opposite banks of the Mississippi.

In Florida, the Pohoy raided a Tocobaga village. Following the attack, the Tocobaga moved their village to the mouth of the Aucilla River.

In Illinois, the Kickapoo, who had now absorbed the Mascouten survivors of the earlier conflicts with the French, were building villages along the Rock River.

In Kentucky, the Shawnee founded Es-kip-pa-ki-thi-ki (“place of blue licks”). The one-acre village was surrounded by a palisade and was occupied by about 200 families.