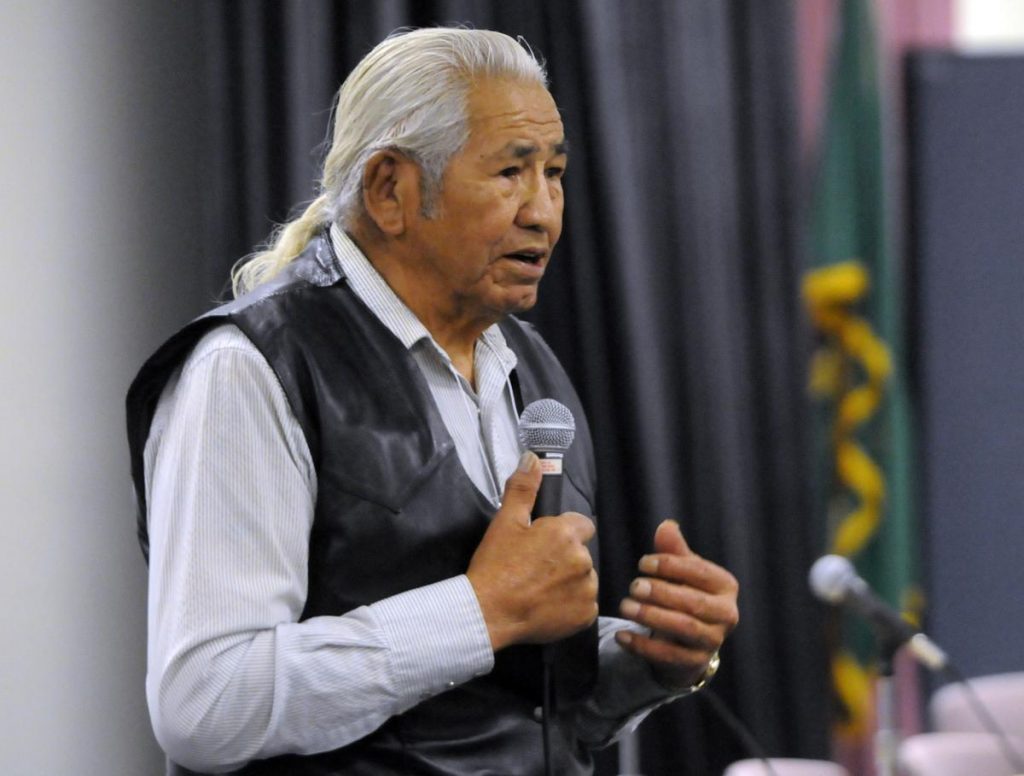 The Salish language family is found on the Northwest Coast and in the Columbia Plateau. Salish is generally felt to have great antiquity in the Northwest Coast. Salish-speakers were the earliest settlers in the Fraser River area of British Columbia. Linguists estimate that this language family may be 6,000 years old, although some feel it may be as young as 3,000 years old.

Salish is the largest language family in the Pacific Northwest. In his book The Salish Language Family: Reconstructing Syntax, Paul Kroeber writes:

“In geographical and cultural terms, too, Salish has a considerable spread: it is well represented both in the central Northwest Coast culture area and across the Coast Range and Cascades in the Plateau culture area.”

In their chapter on language in the Handbook of North American Indians, Laurence Thompson and Dale Kincade report:

Of the Salish languages, Pentlatch, Tillamook, Twana, and Nooksack are no longer spoken. Pentlatch has been extinct for some time and the last known native speaker was alive in the 1930s. Pentlatch was replaced by the neighboring Comox, Halkomelem, and Nootka. Most of the other Salish languages are listed as either endangered or highly endangered.

Some of the divisions of this language family are described below.

The Northwest Coast culture area includes the area along the Pacific Coast north of California and between the Cascade Mountains and the Pacific Ocean. This is the home to many Indian nations who traditionally based their economy on the use of sea coast and river ecological resources. The Northwest Coast Salish languages include a number of sub-groups:

Halkomelem Group: Chilliwack, Cowichan, Katzie, Kwantlen, Musqueam, Nanaimo, and Tait. By 2002 there were no fluent speakers of the Halkomelem Musqueam. In his book When Languages Die: The Extinction of the World’s Languages and the Erosion of Human Knowledge, David Harrison writes:

“Musqueam has a rich vocabulary for describing local flora and fauna, in particular plants or animals that provided nutrients or medicine.”

Nootsack Group: Nooksack, which was spoken by a small group in aboriginal times. Some linguists group this with Central Coast Salish.

Tillamook Group: Tillamook, Nehalem, Nestucca, Siletz, and Salmon River. The Tillamook group is separated from other Salishan groups by Chinookan and Athabaskan speakers.

“In the 1980s, Mainland Comox continued being spoken fluently by about one-third of the population and was the most viable of all Salishan languages.”

Bella Coola: Bella Coola is the most divergent of the Northwest Coast Salish languages. Bella Coola had two or three main dialects. In their entry on the Bella Coola in the Handbook of North American Indians, Dorothy Kennedy and Randall Bouchard write:

“Bella Coola is surrounded on the south, west, and north by Wakashan languages, and on the east by Athapaskan languages.”

“Coeur d’Alene is a rather homogenous language originally spoken in a broad area around Coeur d’Alene Lake in southern Idaho.”

Columbian Group: Chelan, Columbia, Entiat, Methow, and Wenatchee. The languages in this group were originally spoken along the middle portion of the Columbia River in Washington.

“In many respects Okanagan appears more conservative than the other Interior Salishan languages: or else its central location has resulted in its sharing features with languages both to the northwest and the southeast.”

Two of the early works on Salish linguistics were done by Jesuit missionaries working in the Plateau area. Gregorio Mengarini published a primer of Salish grammar in 1861 and in the 1870s J. Giorda published Dictionary of Kalispel or Flat Head. In his book Visible Bones: Journeys Across Time in the Columbia River Country, Jack Nisbet reports:

“Both of these works attempted to shoehorn the tribal language into Latin forms, a difficult task because it has no verb ‘to be’ or any concept of plural nouns. Modern linguists who try to interpret the Jesuit notation can only guess at many points of pronunciation.”

“Linguists refer to these dialects as members of the Interior Salish language group, spoken by people along a curving stretch of territory known as the Salish Arc.”

Vogt also found that few young people on the Kalispel Reservation were fluent in the language.

The Salish-speaking tribes of Idaho and Montana have had a long friendship and association with the Sahaptian-speaking Nez Perce. Linguist Haruo Aoki, in an article in Idaho Yesterdays, reports:

“The relationship between Salish and Nez Perce seems not to be a genetic one. Any words found in the two languages with similarity in form and meaning are likely to be either because of accident or by borrowing and not because of recent common ancestry.”