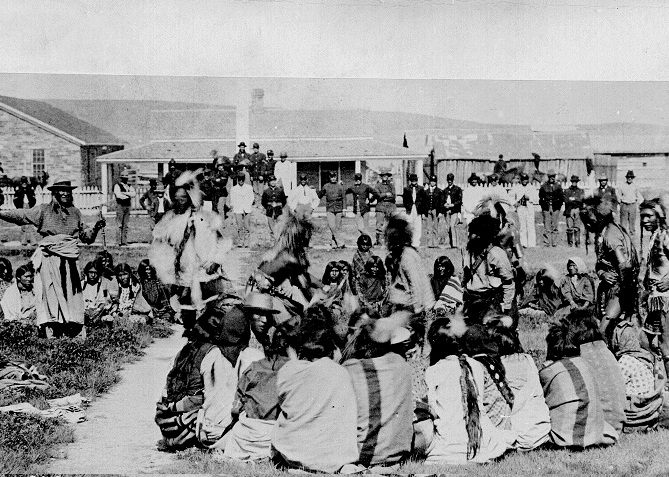 Congress and Administration of Indian Affairs

In Washington, D.C., Congress held hearings on a dam near San Diego, California, which would flood the Capitan Grande Indian Reservation (Kumeyaay). While the Bureau of Indian Affairs expressed some initial concerns about the dam and its negative impact on the Kumeyaay, Commissioner of Indian Affairs Cato Sells testified in favor of it. Law researcher Steven Newcomb, in an article in Indian Country Today, reports:

“During his testimony, Sells displayed a remarkable knack for doublespeak.”

He proposes removing the Indians from their land so as not to interfere with their interests.

Congress passed a law against the establishment of additional reservations or the enlarging of existing reservations in Arizona or New Mexico.

The Society of American Indians voted in favor of the abolition of the Bureau of Indian Affairs.

Congress recognized the Mississippi Band of Choctaw by appropriating funds for land acquisition and for health, education, and other social services.

In Pennsylvania, the Carlisle Indian School closed. The Secretary of War requested the property for a hospital for soldiers returning from Europe. Carlisle, which had opened at an abandoned army base in 1879, was the model for government boarding schools. By removing young children from their cultures, the boarding schools sought to “kill the Indian and save the man” (the motto of Carlisle) by teaching the students European-style culture.

In Montana, the “Birney Ditch” irrigation project on the Northern Cheyenne reservation was abandoned because of a change in policies by the superintendent. The “Birney Ditch” was an irrigation project started in 1910 to irrigate approximately 600 acres near the village of Birney. While the project was cancelled because of the philosophy of the superintendent, the tribe, however, was still held liable for a debt of more than $73,000.

In Montana, the Blackfoot were given permission to sell their allotments. As a result, many sold their lands to non-Indians and were soon indigent.

In Montana, a movie house opened on the Crow Reservation.

In South Dakota, the Indian agent for the Lakota Sioux on the Pine Ridge Reservation officially dissolved the tribal council. The chiefs then established the Treaty Council in order to pursue treaty claims against the government.

In Colorado, the agency for the Ute Mountain Ute was relocated closer to the base of Sleeping Ute Mountain. The site of the new agency is called Towaoc, which means “all right.”

With the death of Annie Bidwell, the home lots occupied by the Mechoopda on the Rancho del Arroyo Chico (Chico Indian Rancheria) in California were bequeathed to the Board of Home Missions of the Presbyterian Church to hold in trust for the Indian families employed on the ranch. The Board, however, refused to accept the trustee appointment and by court action Rev. Harris Pillsbury was appointed as trustee with the understanding that he was to serve until the government assumed trusteeship.

In Florida, the Seminole at Tropical Gardens were now selling live baby alligators and stuffed small ones to tourists. They were also shipping alligator hides to northern factories. Some Seminole men were wrestling with alligators. For the tourists, Seminole actors also put on a Seminole-style wedding.

In Arizona, the Indian agent for the Havasupai continued to plea for plateau land for them. He noted that this land was controlled by the Forest Service and the Indians were allowed to use it on an annual free use permit. In a letter to an Arizona Congressman, he wrote:

“It is good in so far as it provides the Indians with range for one year. It is not good for the reason that the Indian knows it is an annual permit and can be reversed at the end of any one year.”

In Washington, the Lower Nuwaha and the Samish merged.

In Oregon, the Cow Creek Umpqua elders established a formal tribal government and began to lobby for federal services, particularly education for their children.

In Utah, the Gosiute wrote a letter to the Commissioner of Indian Affairs demanding a new superintendent. They complained that he had discontinued the school, did not hire Indians, and had failed to secure justice for murdered Indians. An investigation revealed that the Indians were determined to rid themselves of the superintendent by any means necessary. Their complaints were ignored.

In Nevada, the superintendent of the Walker River Agency hired Indian police to bring Paiute students to the boarding school.

In South Dakota, Jack Red Cloud, the son of Sioux chief Red Cloud, died. While he had been designated a chief by his father, he was never recognized as a chief by the people.

In Oklahoma, Quapaw hereditary chief Tallchief died. Since he had no son, the position of hereditary chief did not continue. His daughter, Maude Supernaw, assumed the responsibility for conferring Quapaw names.