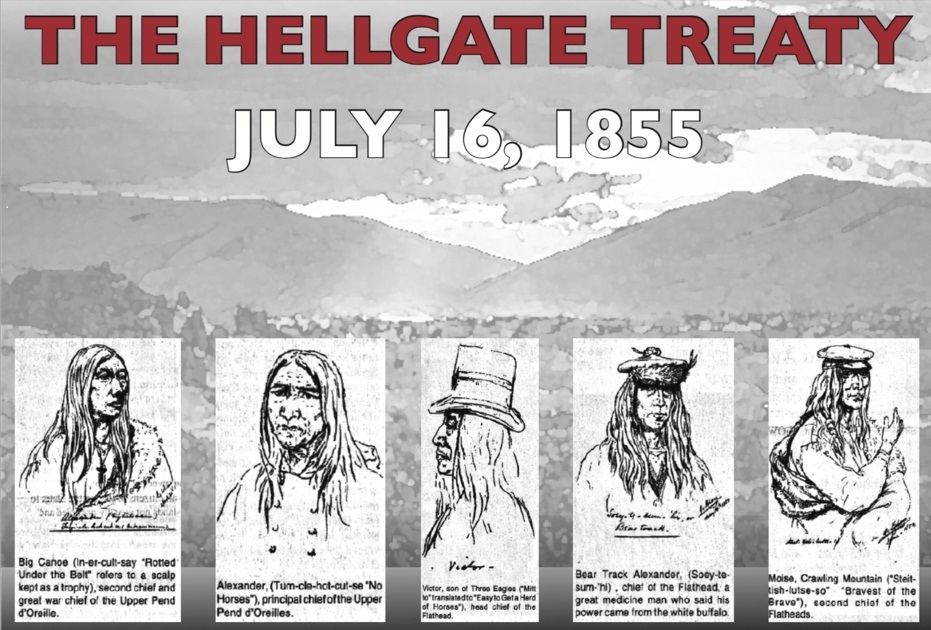 Governor Stevens considered the western Montana tribes—the Flathead (also called the Bitterroot Salish), the Pend d’Oreilles (also called the Upper Kalispel), and the Kootenai—to be unimportant. His goal was to consolidate them, together with other tribes in eastern Washington Territory, on a single reservation.

At the treaty council, held near the present-day city of Missoula, the head chief for the Flathead was Victor, the head chief for the Pend d’Oreilles was Alexander, and the head chief of the Kootenai was Michelle. The Pend d’Oreilles chief Big Canoe also played an important role in the negotiations. Stevens insisted that all three tribes be treated as a single nation because he assumed that they were all Salish. He was unaware that the Kootenai are not a Salish-speaking people.

The Kootenai were included in the treaty council because they had one band living on the western shore of Flathead Lake. However, the Kootenai speak a language which is unrelated to the Salish languages of the Flathead, the Pend d’Oreille, and the other tribes in eastern Washington Territory. Not only are they culturally distinct from the other tribes, they did not have a peaceful relationship with the Flathead.

Following the standard practice of American treaty councils, the Americans simply appointed Victor as the head chief over the three tribes. The Americans preferred to deal with a single chief, preferably a puppet dictator whom they could control.

The American plan for a single reservation was not met with enthusiasm. Stevens proposed that the reservation for the three tribes be created in the Jocko Valley, the homeland of the Pend d’Oreilles. However, the Flathead did not want to leave their homeland in the Bitterroot Valley nearly a hundred miles to the south. When Chief Victor refused to sign the treaty until it included provisions for a separate reservation for this people in the Bitterroot Valley, Governor Stevens called him an old woman and a dog. Victor replies:

“I sit quiet and before me you give my land away.”

Chief Alexander, a Christian, favored the treaty as it would give his people an opportunity to learn more about Christianity. He did, however, accuse Governor Stevens of “talking like a Blackfoot.” This was not a compliment.

Red Wolf (Flathead) questioned the wisdom of combining the three tribes and attempted to explain to the Americans that each of the tribes is different. The Americans turned their deaf ears toward his words and continued to act upon their delusion that all Indian cultures were the same.

Big Canoe, a Pend d’Oreilles, pointed out that his people had offered the hand of friendship to the Americans since first contact. He questioned why there was a need for a treaty, saying that treaties were used to settle differences between enemies. While he still offered friendship, he felt that the Americans did not have the right to come into his territory and take away his lands.

While the 1855 Treaty of Hell Gate established what would become the Flathead Reservation in western Montana, it also acknowledged the rights of the Flathead to remain in their homeland in the Bitterroot Valley. According to the treaty, which was theoretically the supreme law under the Constitution, the Bitterroot Valley was to be closed to non-Indian settlement. Article 11 of the treaty states:

“No portion of the Bitter Root Valley, above the Loo-lo Fork, shall be open to settlement until such examination is had and the decision of the President made known.”

Victor felt sure that the President would agree with him that the Bitterroot Salish should be allowed to retain their traditional homelands.

As with the other treaties negotiated by Stevens, the Hell Gate Treaty states:

The assembled chiefs signed the treaty agreement believing that the United States would protect them from Blackfoot raids and that the government would provide them with generous monetary payments and annual appropriations. The chiefs were unfamiliar with American concepts of land ownership and both the treaty and the discussions regarding land ownership were poorly translated.

Historian Jaakko Puisto, in an article in the American Indian Culture and Research Journal, reports:

“They signed primarily for five reasons: They believed that the government would provide them protection from the raiding Blackfeet; Stevens ambiguously promised them two reservations (a promise he knew he could not keep); the tribes would receive seemingly generous monetary payments and annual appropriations; Indians were unfamiliar with American concepts of land ownership; and both the treaty and the discussions leading to it were poorly translated.”

The Kootenai, whose language and culture was very different from that of the two Salish-speaking groups, claimed a territory that included part of western Montana, northern Idaho, and southern British Columbia. One of the Kootenai bands in Idaho declined to move to the newly established Flathead Reservation and today maintain their own reservation. The Elders of the Kootenai Nation in Idaho report that Michel did not attend the treaty council but sent some men to hear what Stevens had to say. According to the Elders:

“When they returned and told him about the plan to put us all on a reservation in return for giving up all of our Aboriginal Territory, Chief Michel was horrified. He said that would be impossible.”

According to the Elders:

“so no Kootenai ever signed that Hellgate Treaty. Someone forged the Kootenai marks on it.”

The Upper Kootenai were given the choice of relocating on the new reservation or removing to Canada. One band moved to Dayton Creek on Flathead Lake, an area within the reservation.

Thelma Stevenson and Olga Johnson, writing about the Kootenai in an article in The Story of the Tobacco Plains Country: The Autobiography of a Community, report:

“As with many other treaties, the language used in defining reservation boundaries and Indian rights was vague and not clearly understood by the Indian leaders.”

Indians 101/201 is a series exploring American Indian histories, cultures, biographies, and current concerns. Indians 201 is an expansion of an earlier essay. More from this series: