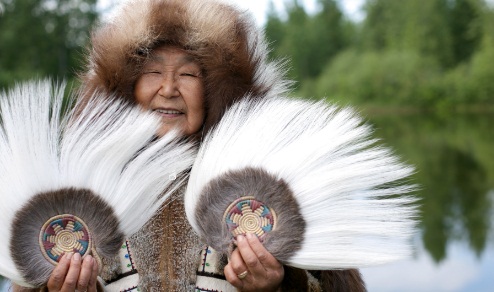 On October 16, 2018, Valerie Davidson was sworn in as the Lt. Governor of Alaska. Valerie “Nurr’araaluk” Davidson, JD, Yup’ik, is an enrolled Tribal member of the Orutsararmiut Native Council. Ms. Davidson is a long-time advocate for Native health issues and brings many years of expertise to this position.

Lt. Governor Davidson was the Inaugural Chairperson of the Tribal Technical Advisory Group to the Centers for Medicare and Medicaid Services from 2004 – 2014. She served as the Senior Director of Legal and Intergovernmental Affairs with the Alaska Tribal Health Consortium (ANTHC) where she was also the spokesperson, chief political and legal strategist for ANTHC’s Dental Health Aide Therapy Program, the country’s first mid-level dental program. She was appointed the Commissioner of the Alaska Department of Health & Social Services (DHSS) by Governor Bill Walker in December 2014 and served in that position until assuming the role of Lt. Governor yesterday.

She was the 2014 winner of NIHB’s prestigious Jake Whitecrow Award which recognizes an individual or organization with outstanding lifetime achievements in elevating health care advocacy, raising awareness or affecting positive change for American Indian and Alaska Native health care.

The state’s new Lt. Gov. gave her first public speech today. Valerie Davidson is the first Alaska Native Woman to hold statewide office in Alaska. She spoke at the annual tribal conference, held today at the Egan Center to kick of the Alaska Federation of Natives Convention, which starts tomorrow.

Davidson began by acknowledging the troubling circumstances that led to her being sworn in as Lt. Gov. yesterday, when Byron Mallott abruptly resigned after admitting he made inappropriate comments.

This speech has been cut down and transcribed for length.

DAVIDSON: Quyana for allowing me to be here today and I just want to acknowledge that, while I’m really honored to step into the role of lieutenant governor, this is not really a situation that any of us could have predicted. And I’ll just be honest, yesterday was a really tough day for all of us.

But today is a new day, and today is our opportunity to move forward, to work together, to continue to heal the past so that we can move forward in strength and together and that’s what we do as Native people, and we will continue to do that today. I know actually a lot of you in the room today, but there are some of you who I don’t know.

So let me do a proper introduction. My Yup’ik names are Nurr’araaluk Amillamarnan. My English name is Valerie Davidson. If you forget my Yup’ik names, we Yup’iks have this wonderful word which basically means hey you. So do take care to practice it carefully though because if you say something else it’s something else entirely and we don’t want to go there.

I’m originally from Bethel. I grew up in Bethel and also upriver in Aniak. My mother’s family is Yup’ik from [a village that] literally means “Village With no River” because it’s located on the ocean. If you’re ever in Bethel and you head downriver, once you hit the ocean hang a right, and you will run into my mother’s home village. Her English name is Tilly Davidson. She’s a Mount Edgecumbe graduate.

My father’s family is kass’aq, which basically means “not Yup’ik” and they’re from Port Orchard, Washington. And in the fine Yup’ik tradition, my mother made my dad move completely from his home community and move to the Bethel area.

I was also recently adopted by the Jackson family in Kake and they are both Tlingit and Haida and I was given the Haida [a] Haida name which I’m told means “noisy lady.” And I was named after my late aunt, and I like to think that I was given that name because I have a really loud authentic Native laugh.

So the other things that you should know about me; probably the most important thing, I’m a mother of four children. I also have a godson. They are my greatest accomplishments in my entire life. They make me better than I really am and I love them dearly.

You should also know that I’m a village girl. And I’m proud to be a village girl because when you grow up in a village you learn from a really early age, it doesn’t matter whether it’s 40 above or 40 below. If it’s tough weather outside, it doesn’t matter. We get up, we put on our clothes, we pack water, we chop wood and we do what needs to get done to face the day and that’s where we are today.

Lt. Gov. Valerie Davidson, speaking at the annual tribal conference organized by Alaska Federation of Natives and the National Congress of American Indians. The speech was recorded in a Facebook Live video from the Anchorage Daily News.

Native Alaskans Speak Out Against Palin

Yes, it is Time for A Change with Alaska Natives and Native Americans.