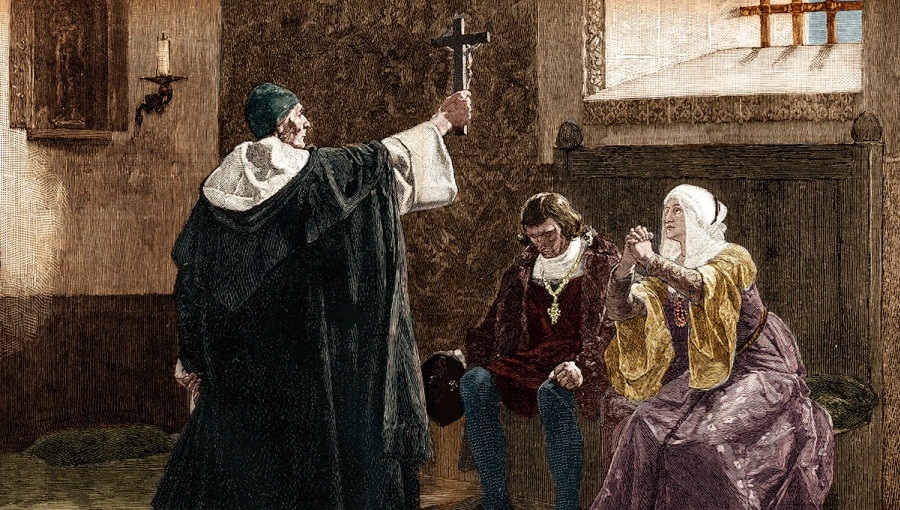 In 1869, the Peace Policy of President Grant forcibly mixed religion and the federal government’s policies regarding Indian reservations. Disregarding any possible religious views of Indians, services to Indian reservations were given to Christian missionary groups. These services included schools, health care, and the distribu­tion of rations. As a result, young Indians were required to attend mission schools which included daily instruction in Christianity. Native religious practices and the speaking Indian languages were prohibited.

In an essay in The State of Native America: Genocide, Colonization, and Resistance, Indian writer Vine Deloria points out:

“The two protec­tions of the First Amendment were simply not a matter of concern when federal reservation policy was formulated.”

Anthropologists Richard Clemmer and Omer Stewart, in their chapter in the Handbook of North American Indians, describe Grant’s policy:

“The purpose of the policy was to de-Indianize the Indians: to make them into rural farmers of Christian faith, literate in English (and preferably speaking no other language), ‘unfettered’ by ancient traditions and customs, and skilled in blue-collar professions that would turn Indian communities into approximations of rural American towns.”

One of the foundations of this policy was to have Christian missions in each community and to implement behavioral codes which would encourage acculturation.

With regard to denomination, the greatest number of Indian reservations were given to the Methodists while the fewest were given to the Lutherans. The tribes were parceled out to different religious groups without any consideration to previous missionary activity on the reservation.

With regard to the Indians of California, anthropologist Edward Castillo, in a chapter in the Handbook of North American Indians, points out:

“In California by far the majority of Indians who considered themselves Christians were Roman Catholic. Therefore with the typical forethought and sensitivity of a bureaucracy the California superintendency was ‘given’ to the Episcopalians.”

In Montana, the Blackfoot were given to the Methodists even though they had never sent a missionary to the tribe and the Jesuits (a Catholic order) had been working with them for decades.

In Nebraska, the six reservations were placed in the care of the Hicksite Quakers, the liberal branch of the Society of Friends. A part of the Quaker plan to destroy the political and social structure of the Pawnee was the elimination of the Pawnee scouts, a group which had a long history of serving the United States army. According to history writer Shelley Frear, in an article in True West:

“The righteous Quaker brotherhood made no allowance for the Pawnee culture, traditions, or experiences when devising their divine plan to dismantle the Scouts.”

Ignoring the reality of drought and grasshoppers, the Quakers saw farming as the way to convert the Pawnee. According to Douglas Parks, in his chapter on the Pawnee in the Handbook of North American Indians:

“The Quakers’ assimilationist policy had as its ultimate goals the allotment of Indian lands, the establishment of farms, and the education of Indian children—goals that were not achieved while the Pawnee lived in Nebraska.”

The first Quaker Indian agent for the Big Blue Reservation (Otoe-Missouria) in Nebraska and Kansas, found 450 Otoe living in a 25-acre village which contained 30 earthlodges. The Otoe continued to use their traditional agricultural practices and to do some hunting. In her chapter on the Otoe and Missouria in the Handbook of North American Indians, Marjorie Schweitzer reports:

“The Quaker agents came with good intentions, but they failed to understand the organization of the tribe and succeeded in disrupting the leadership pattern, contributing to factionalism.”

In Nebraska, the Quakers assumed control of the Omaha reservation. The tribal chiefs asked that the funds for the Presbyterian boarding school be withdrawn and that two day schools be established. Historian Judith Boughter, in her book Betraying the Omaha Nation, 1790-1916, writes:

“The Friends treated the Indians as ‘spiritual equals’ but ‘cultural inferiors’ who must learn white ways or perish.”

They stressed allotment and the creation of individual farms.

In Oklahoma, the Comanche and Kiowa, under President Ulysses S. Grant’s Peace Policy, were assigned to the Quakers and the army was removed from the reservation.