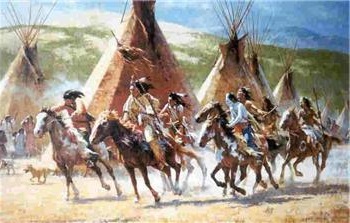 In North Carolina, Swiss Baron Christoph von Graffenried founded the colony of New Bern on Tuscarora land without obtaining Tuscarora consent or paying them for it. The Tuscarora, angered by the European land developers who paid little attention to Tuscarora land and to their treaties, captured a surveying party who were laying out the new colony. The captured men were taken to the Tuscarora town of Catechna and tried before a council of chiefs. One of the men, the provincial surveyor-general, was condemned to death and executed.

The Tuscarora then attacked the Swiss settlement, killing nearly 200, including 80 children.

The Tuscarora, concerned about slave-raids from South Carolina, raided frontier farms and began a war against the European settlers. Joining the Tuscarora in the raids were the Coree, Pamlico, Mattamuskeet, Bear River, and Machapunga.

The British traders encouraged the Yamasee and the Creek to attack the Tuscarora. In addition, the British supplied the Cherokee with guns on the condition that they fight the Tuscarora.

In Virginia, English colonists were afraid that the Nottoway were going to join the Tuscarora in their war against the English. A delegation of English officials visited the main Nottoway village and persuaded them to remain at peace. In addition, Nottoway warriors agreed to help prevent the fighting from moving north into Virginia.

The English authorities noted that the Nottoway at this time had cultivated fields, were using European textiles for clothing, and were raising hogs for both sale and consumption.

In Michigan, the Ottawa and Potawatomi attacked a Mascouten hunting party near the headwaters of the St. Joseph River. The Mascouten fled east, seeking refuge among the Fox near Detroit. The Fox prepared a war party for retaliation, but the French commander of Fort Ponchartrain ordered them to stop. As a result the Fox attacked the French fort.

While the Fox were attacking the French, a party of Ojibwa, Ottawa, Huron, and Potawatomi arrived and defeated the Fox. Some of the Fox sought refuge among the Iroquois while others fled to their homelands in Wisconsin where they continued to wage war against the French and their allies.

The British War Against the French:

In New York, the British raised an Indian army to attack the French in Canada. The army included Mahican, Scaghticoke, Wappinger, and Munsee warriors. The Iroquois sent 656 warriors to join the expedition: 182 Seneca, 127 Cayuga, 99 Onondaga, 93 Oneida, and 155 Mohawk. The British fleet, however, failed to enter the Saint Lawrence River and the war party returned without engaging the French forces.

In Florida, the remnants of the once mighty Calusa were living in the Keys and were under continuing pressure from the Yamassee and Uchise. The Spanish in Cuba offered refuge to those who professed an interest in Christianity, but most of these died en route to Cuba. A total of 270 Indians, including Calusa, Jobe, and Mayaimi, emigrated.

In Massachusetts, the Gay Head Reservation was established by the English colonists on Martha’s Vineyard. The New England Company decided that the Indians should pay for a part of the costs of the reservation. Over the objection of the Gay Head,  600 acres were leased to an English settler. Some of the best acres on the new reservation were leased to English settlers at low rates. Consequently, the land brought in very little income for the Indians.