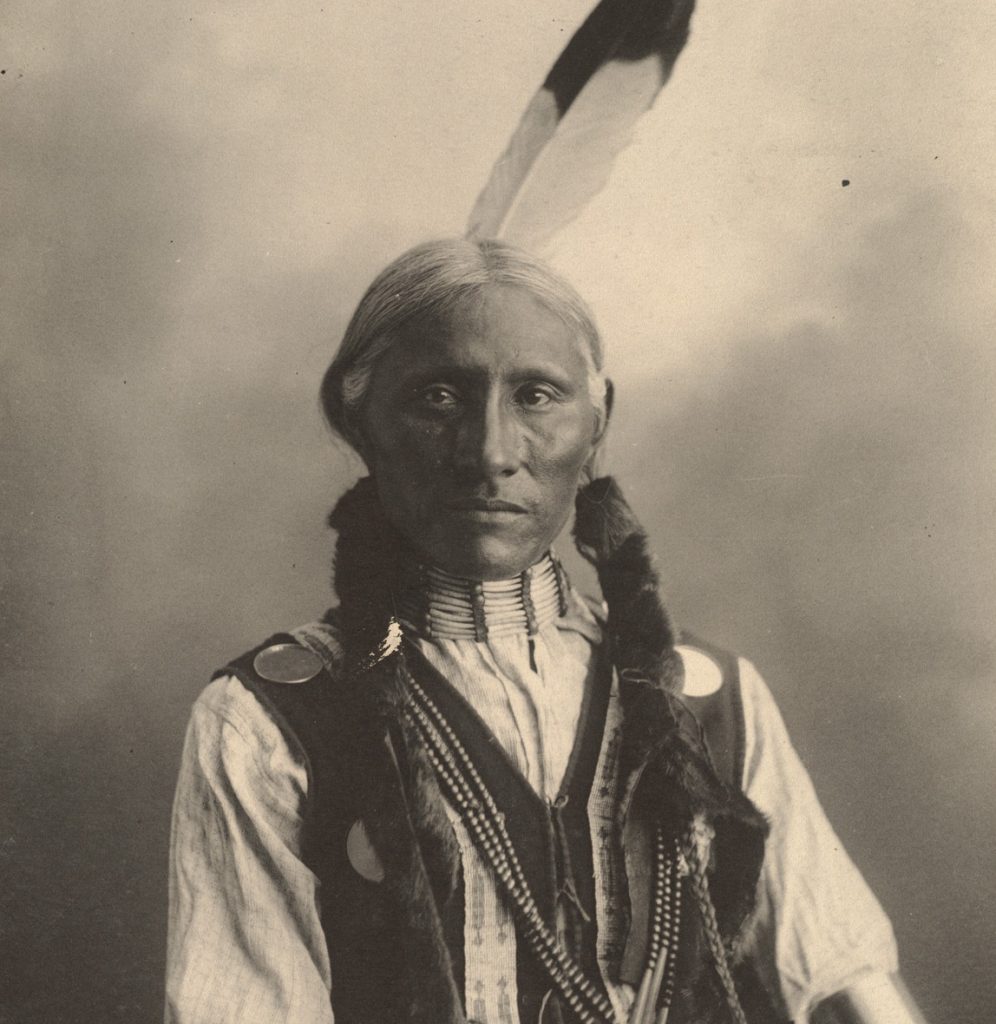 The Cheyenne oral tradition tells of a time when the people were living in what is now Northeastern Canada. They had a way of life which centered around hunting wild game and gathering wild plant foods. Disease prompted them to leave their homeland and move south into the marshy areas between Ontario and Minnesota.

The Cheyenne oral history goes on to tell of a time when the people were a fishing people who lived in a marshy area near a large body of water. Next they became villagers living in earth lodges, planting corn, and hunting without horses. Then, they migrated westward and received the buffalo from the Sacred Mountain (Bear Butte). The Cheyenne divide their history into four parts: (1) “ancient time” when the people were happy but were decimated by a terrible disease leaving the people as orphans; (2) “time of the dogs” when the dogs were used as beasts of burden; (3) “time of the buffalo” when the people moved beyond the Missouri River and began to hunt buffalo; and (4) “the time of the horse.

At the time of first contact with the Europeans, in 1680, the Cheyenne were living at the mouth of the Wisconsin River. Here they established trading relations with the French. The French called them Chaa, which was most likely a corruption of the Dakota (Sioux) word Sha-Hi-Ya-Na, which means “people of the alien speech.”

The Cheyenne later moved west to the Minnesota River valley because of Sioux expansion. By 1700 they were in the Sheyenne River Valley in eastern North Dakota. Here they lived in earthlodge villages and farmed corn, beans, and squash in a manner similar to the tribes of the Missouri River (Mandan, Hidatsa, Arikara). Archaeological records show that the Cheyenne were occupying the Biesterfeldt site in southeastern North Dakota by 1750.

At about that time, the several bands of the Cheyenne came together to form the Council of Forty-Four, one of the most formal governmental systems on the Plains.

In the mid-1700s, the Plains Cree, Plains Ojibwa, and the Assiniboine pushed them farther west. The Cheyenne established themselves in the Black Hills area where they acquired the horse and began to become buffalo hunters. In the Black Hills, the Cheyenne encountered the Arapaho who had probably moved out of the Minnesota area ahead of them. The Arapaho accepted the Cheyenne intruders as friends and the two peoples became confederated.

By 1700, the pressure from the Algonquian-speaking tribes was also pushing the Sioux out of Minnesota and out onto the Great Plains. Pressure from the Teton Sioux, in turn, soon pushed the Cheyenne even farther west.

As they moved out onto the Plains, the Cheyenne underwent more cultural changes. Since they had been in close contact with the Mandan and the Hidatsa, they came to incorporate elements from these cultures into their ceremonial complex. This included borrowing parts of the Mandan Okipa ceremony as a part of the Sun Dance.

As late as 1800, the Cheyenne still had some villages which were planting corn along the Missouri River. After 1825, the Cheyenne began to divide into a Northern tribe and a Southern tribe. The Southern Cheyenne, closely allied with the Arapaho, began to migrate south into Colorado. The Northern Cheyenne continued to hunt on the Plains of Montana and became allied with the Sioux.