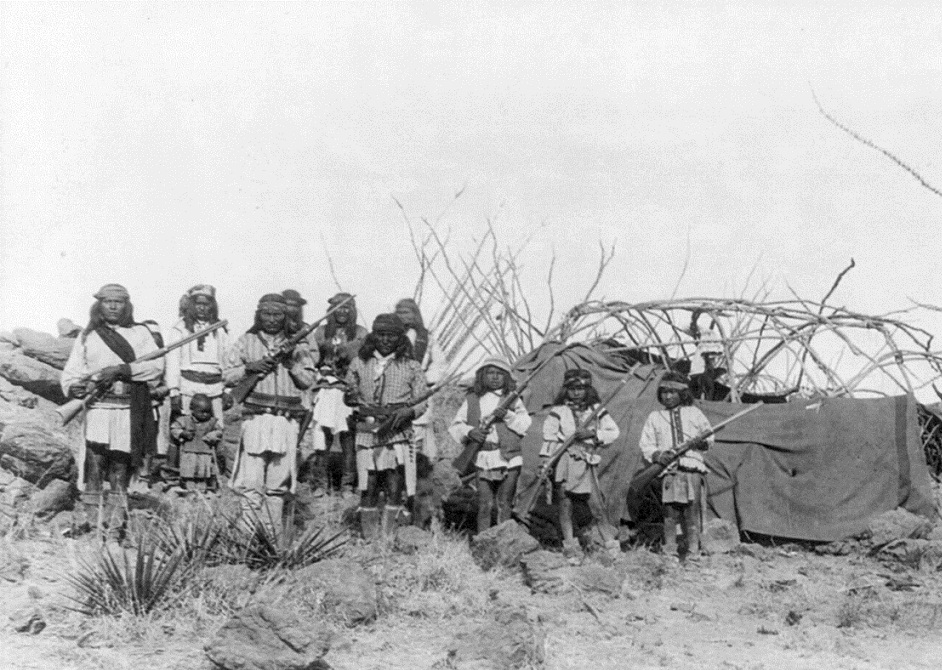 In some parts of the country, such as Indian Territory (now Oklahoma), the Civil War divided Indian nations with some joining the Union forces and others joining with the Confederacy. In other parts of the country, such as Arizona, the Civil War simply meant that Indians now had two enemies rather than just one. In many instances, the tribes were unclear about the difference between Union and Confederate forces.

The California Volunteers under the command of General James Carlton entered Arizona from the west in 1862 with the intent of displaying a Union presence in a territory whose sympathies lay with the South. At Maricopa Wells, the Americans met with the Maricopa. One of the members of the Volunteers wrote:

“They presented a comical appearance, half-civilized, half-barbarous, as they rode up to our camp on their raw-boned ponies, dressed off in some United States uniforms given them by order of the General; brass buttons and red paint, infantry dress coats and bare legs, military caps and long hair.”

The Maricopa chief expressed friendship with the Americans and asked for weapons so that they might defend themselves. Two years earlier, the Maricopa, together with some American allies-the Gila Rangers-had raided the Yavapai, killing 13 and capturing five who were sold into slavery in Mexico. The Maricopa, who were probably unaware of the reality of the Civil War, viewed these new American troops as potential allies and potential partners in their raids against other Indians.

Like the Maricopa, the Apache were probably unaware of the Civil War, but when Union troops entered their territory they responded in what they felt was an appropriate fashion: under the leadership of Cochise and Mangas Coloradas, the Apache attacked the column. The troops set up artillery and returned fire. The Apache were driven off by canon fire and Mangas Coloradas was wounded. In response to this attack, Union forces established Fort Bowie at Apache Pass so that the military could escort travelers, mail couriers, and supply trains through the pass.

The attitude of the Americans toward the Apache was expressed by a member of the California Volunteers who wrote:

“Before leaving Apache Pass too far behind I wish to say that I am an advocate for the extermination of the Apaches. They have never made and kept a treaty of peace, but have ever been thieves, highwaymen and murderers. Year out and year in, hundreds have perished upon the roads by their hands, and it is estimated that within the past twelve months at least one hundred white persons have been killed by them on the road between Tucson and the Rio Grande; some of which murders were most horrible, tying up their victims by the heels and building slow fires under their heads.”

In New Mexico, Union General James Carlton ordered Kit Carson to round up the Mescalero Apache and confine them on a reservation at Bosque Redondo. The General’s orders:

“The men are to be slain whenever and wherever they can be found. The women and children may be taken as prisoners.”

“The Congress of the Confederate States has passed a law declaring extermination to all hostile Indians. You will therefore use all means to persuade the Apaches of any tribe to come in for the purpose of making peace, and when you get them together kill all the grown Indians and take the children prisoners and sell them to defray the expense of killing the Indians.”

In 1863, Union General Carleton issued an ultimatum to the Navajo: they were to peacefully transfer to the reservation at Bosque Redondo or be treated as hostile. Colonel Kit Carson then began to wage a “scorched earth” campaign against the Navajo. The plan, devised by General Carleton, called for all male Navajo to surrender or be shot.

In 1863, soldiers under a white flag lured Apache leader Mangas Coloradas into a parley where he was seized. While he was sleeping, his guards touch his feet with bayonets which have been heated in the fire. When he rose in protest, he was shot. The army claimed he was killed while trying to escape.

As the other Apache prisoners watched, the soldiers boiled Mangas Coloradas’ severed head in a cauldron to prepare the skull for scientific study. While the Anglo scientists had an interest in correlating brain size and skull shape with intelligence, character, and racial characteristics, the Apache viewed the mutilation as a barbarity that exceeds the murder. As a consequence, Apache mutilation of American enemies they had killed became more common.

In 1863, Arizona gained political independence from New Mexico and its new constitution disqualified Indians from participation in the electoral process.

At Fort Yuma, Arizona, the United States negotiated a treaty of peace in 1863 among the Pima, Mohave, Yavapai, Maricopa, Chemehuevi, Walapai, and Yuma. The purpose of the treaty was to promote safe travel in tribal territories by the Americans. The tribes also promised to help the Americans in their war against the “Apache Tribes.” The treaty was not ratified by the Senate.

In 1864, Union General James Carleton took command of the war against the Apache. He claimed that he could subdue the Apache quickly and sent hundreds of troops against them. Like other Americans, Carleton never understood that there were several distinct Apache tribes and assumed that the Apache were a single unified tribes. Consequently, the American troops spent most of their time attacking peaceful groups, creating more enemies.

A U.S. Army dispatch summarized the official attitude regarding the Apache in Arizona territory:

“All Apache Indians in that territory are hostile, and all Apache men large enough to bear arms who may be encountered in Arizona will be slain wherever met, unless they give themselves up as prisoners. No women or children will be harmed; these will be taken prisoner.”

While Arizona’s many Indian nations did not become directly involved with the Civil War, during the war the American stereotypes and antagonisms towards the Indians seemed to intensify and help justify the Americans’ genocidal attitudes.

The United States and the Pueblos