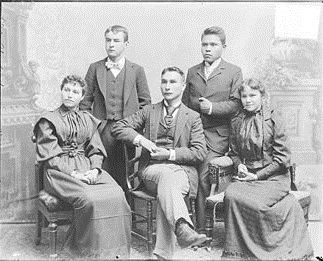 By the late nineteenth century, all Americans, except for American Indians, knew for a fact that all Indian tribes would be extinct in the twentieth century and that all individual American Indians, like other immigrants, would be fully assimilated into mainstream American culture in which they would be English-speaking, Christian farmers. While this American fantasy continued to survive through most of the twentieth century, Indians did not vanish. As Americans entered into the period of growth and prosperity popularly known as the Roaring 20s following World War I, Indian tribes and Indian people continued to exist, usually out of sight of non-Indians.

During the nineteenth century, the American government, in its infinite wisdom and charity, had moved American Indians out of the way of economic development by attempting to confine them to reservations. In 1920, non-Indian entrepreneurs, aided by the American government’s Indian Office and inspired by greed, began to look at the possible economic resources on Indian reservations. The American government, believing its own racist propaganda, assumed that Indians should not be allowed to develop these resources, but rather they should be developed for and by non-Indians. Since Indians were the poorest people in the United States, there was little, if any, concern for providing adequate compensation for the resources which were taken from them.

The Indian agent for the Gros Ventre and Assiniboine on the Fort Belknap Reservation in Montana rented the coal mine on the reservation to a non-Indian. While Indians now had to buy coal from the mine, non-Indians were allowed free coal. The Indian agent justified renting the coal to non-Indian interests by saying that the Indians did not know enough about Anglo practices to mine and market the coal.

The City of Tacoma, Washington, applied to the Department of Interior to purchase a right of way through the Skokomish Reservation for power lines and service access roads in conjunction with their Cushman Hydroelectric Project. While the Department of Interior was considering this request, the City of Tacoma filed a condemnation suit in state court to acquire the land needed for the project. Included in the condemnation suit were the tribal trust lands. The City did not notify the Department of the Interior or the Bureau of Indian Affairs about this law suit.

In order to allow non-Indians to obtain Yavapai water rights in Arizona, the Bureau of Indian Affairs quietly obtained an executive order from President Woodrow Wilson which authorized the allotment of the Salt River Reservation and reclassified the Fort McDowell Reservation as grazing land.

The residents of Bernalillo, New Mexico, put forth a plan to divert water from one of Santa Ana Pueblo’s ditches into the Bernalillo Community Ditch. While the residents claimed that their plan would not interfere with Santa Ana water, the Pueblo insisted that an agreement be drawn up in which the Bernalillo Community Ditch users acknowledged Santa Ana water rights. The document also stated that these water rights did not fall under state jurisdiction.

While one of the goals of the government’s assimilation program was to make Indians into self-sufficient farmers, a government report (released in 1921) revealed that most Indian land was being farmed by non-Indians: 4.5 million acres as compared with only 762,000 acres which were being farmed by the Indians themselves.

In the United States in 1920, most Americans strongly believed that there was only one true religion: Christianity as reorganized during the Protestant reformation. With regard to American Indian religions, most non-Indians felt that either Indians had no religion or that they worshiped the devil. In either case, it was the duty of the government to bring the Indians into Christianity so that they could participate in American society. While Indian religious activity had been illegal now for two full generations, the aboriginal ceremonies refused to die and so the government continued its efforts to suppress these activities and to jail those who participated in, or advocated participating in, such evil ceremonies. The government was particularly interested in stopping the Plains Indian Sun Dance and the pan-Indian Native American Church.

In Wyoming, the Shoshone under the spiritual leadership of Morgan Moon openly revived the Sun Dance on the Wind River Reservation. The reservation superintendent had banned the dance and when John Truhujo spoke with him about it, Truhujo was threatened with five years in Leavenworth Prison. An Indian Office supervisor from Washington, D.C. watched the dance and took pictures. After having seen the dance, the supervisor disagreed with the reservation superintendent and reported that he saw nothing wrong with the ceremony.

In Arizona, the non-Indian principal of the Oraibi School interrupted a Hopi ceremony when he saw a clown dancer with a huge artificial penis. In the words of the principal, he stopped the ceremony and told the dancer

“that if he ever did a thing like that again, I would put him in jail. He told me that he did not know it was wrong, that it was a Hopi custom.”

The American government was (and still is) particularly concerned with instilling an addiction to greed in American Indians. Above all, private property was to be worshipped, so the traditional practice of giving property away was deemed offensive. In Montana, the superintendent of the Fort Peck Reservation wrote about Indian dances:

“The dance itself is extremely demoralizing because when they dance they insist upon giving away property. More than one-half of these Indians if allowed to would give away all of their property. The Indian dance has a direct influence against the Church influence.”

While government agents were busy attempting to suppress traditional religious practices on the various reservations, the Indians continued to borrow non-Christian religious ideas from each other. On the Fort Peck Reservation, for example, where the Indian agent was busy trying to stop Indian dances, the Assiniboine imported what would become the Owl Dance from the Standing Rock Reservation in South Dakota. This was primarily a social dance and it was held in secret in isolated places out of the sight of the Indian agent and other non-Indians.

One of the concerns of government officials and missionaries was the rise of a new religious movement which blended Christianity and traditional American Indian concepts. Ignoring the elements of Christianity in this new movement and focusing almost entirely on the fact that it incorporated a plant-peyote-as a sacrament, the government and the missionaries attacked the Native American Church on the basis that it somehow promoted intoxication.  Using bogus science and the paranoia of “drunken” Indians, there was a rush to create new laws at the local, state, and federal levels to ban peyote and the religion associated with it.

In Idaho, the peyote religion was brought to the Shoshone and Bannock of the Fort Hall Reservation by Shoshone spiritual leader Jack Edmo and by Sioux spiritual leader Cactus Pete. The new religion rapidly spread across the reservation and alarmed agency officials. In response, the Indian agent arrested Jack Edmo and others as he viewed peyote meetings as a form of immorality. He then contacted the Commissioner of Indian Affairs to see if he was authorized to try them for violating Indian Office Regulations against the practices of medicine men.